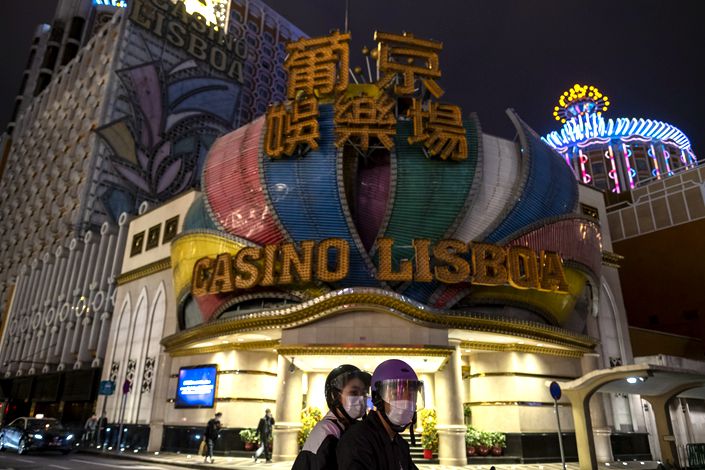 A motorcyclist and passenger wearing face masks pass the Casino Lisboa after its lights were switched off at dusk in Macao on Feb. 5. Photo: Bloomberg

(Bloomberg) — Casinos in the world’s biggest gambling hub were cleared to resume operations on Thursday, following an unprecedented closure for 15 days to curb the spread of the deadly coronavirus.

Lei Wai Nong, secretary for economy and finance in the Chinese territory of Macao, said in a briefing Monday that casinos can reopen Feb. 20, though it will be conditional based on criteria that he didn’t specify.

The resumption could lift a sector already reeling from a slowdown in the Chinese economy and a shift to gambling operations in Southeast Asia. Fitch Ratings estimated that the crisis could wipe out $3.3 billion in cash flow for the six Macao operators, including the local units of Las Vegas Sands Corp. and MGM Resorts International.

A Bloomberg Intelligence index of Macao casino operators fell as much as 0.9% in trading Tuesday in Hong Kong. The gauge has climbed back 6% this month, after dropping 10% in January.

While the re-opening could provide some relief for casino operators, the move will have little impact on fundamentals, according to JPMorgan. Business will likely remain slow because of restrictions on visas and transportation, and Chinese players are probably unwilling to travel at this point, analysts led by DS Kim wrote in a note Monday.

Macao closed casinos for a 15-day period that began Feb. 5, in the longest shutdown ever for the world’s biggest gambling hub. MGM said it’s losing $1.5 million a day in Macao, while Wynn Resorts said it is losing about $2.5 million a day.