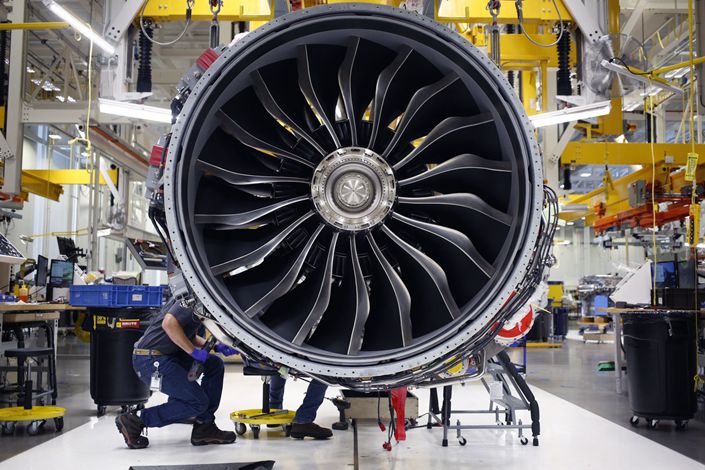 (Bloomberg) — President Donald Trump has intervened to stop his own administration’s developing plans to block sales of General Electric-made jet engines to China and other proposed restrictions on American exports, declaring that national security is being used too often by his own officials to limit American companies’ ability to transact with China.

“We don’t want to make it impossible to do business with us,” Trump said in a tweet on Tuesday. “That will only mean that orders will go to someplace else.”

The presidential intervention represents a rare public rebuke of some of the administration’s hardliners on China, who have been pushing stricter rules to curtail sales of U.S. technology to Beijing — from semiconductors to jet engines. It also comes as Trump is touting a “phase one” deal with China that is meant to spur a $200 billion Chinese buying spree of American exports including commercial jets and other manufactured products.

Senior officials were expected to decide by the end of this month whether to block exports to China of jet engines made by a General Electric Co. joint venture with France’s Safran SA for use in the Commercial Aircraft Corporation of China’s C919 single-aisle passenger jet now undergoing flight tests, according to three people familiar with the issue. They also have been considering broadening restrictions on sales by U.S. and overseas suppliers to Huawei Technologies Co.

The president indicated to reporters later on Tuesday that his concerns over the use of the “fake term of national security” extended to new proposed Huawei provisions, which are aimed at limiting its access to chips.

“I mean, things are put on my desk that have nothing to do with national security, including with chipmakers and various others,” Trump said as he departed Washington. “I’ve been very tough on Huawei. But that doesn’t mean we have to be tough on everybody that does something. We want to be able to sell all of this incredible technology — we’re number one in the world.”

Trump’s tweets Tuesday brought into public light what in recent years has been a bitter battle between two factions in his administration. One group sees China’s economic rise as an existential challenge to the U.S. and advocates a “decoupling” of the two economies. The other views any such move as too extreme, arguing it would present its own risk to U.S. power and American innovation.

The president’s comments also came as another crucial moment was approaching.

Both the GE and Huawei potential restrictions and other China-related policies were due to be discussed by senior officials on Thursday ahead of a cabinet-level meeting scheduled for Feb. 28, according to people familiar with the proposals. The measures appeared to have some backing from several agencies including the Department of Commerce, the people said.

“I have seen some of the regulations being circulated, including those being contemplated by Congress, and they are ridiculous,” Trump tweeted.

“We want to sell product and goods to China and other countries. That’s what trade is all about. We don’t want to make it impossible to do business with us. That will only mean that orders will go to someplace else,” he tweeted.

The intervention is not the first Trump has made against his China hardliners. In May 2018, he overruled his own Commerce Department on behalf of blacklisted Chinese telecommunications company ZTE after a call with Xi Jinping, the Chinese leader.

Derek Scissors, who tracks the U.S.-China economic relationship at the conservative American Enterprise Institute and has advised the Trump administration in the past, said Trump appeared in his tweets to be thumbing his nose at those in Congress and in his own administration who see limiting tech and other exports to China as a national security priority. “He cares about the trade balance right now,” Scissors said.

The president didn’t address directly Tuesday proposed changes also under discussion related to Huawei. But he has in the past opposed restrictions on sales by American suppliers to the Chinese company of non-sensitive products. “I like our companies selling things to other people,” he told reporters in Japan last year after a meeting with Xi in which he agreed to allow sales to Huawei.

Huawei, which has faced long-standing U.S. accusations of being a conduit for Chinese espionage efforts, was placed on a Commerce Department black list last year that effectively bans U.S. suppliers from doing business with it. Huawei has denied such claims.

The new measures under consideration are aimed in large part at semiconductor exports and part of a broader administration campaign to convince allies not to use Huawei’s equipment in new fifth-generation communications networks, an effort that heated up again at a weekend security conference in Munich.

The administration is now talking about closing a loophole that allows American companies to use overseas production facilities to sell materials with less than 25% U.S. content by lowering that limit to 10%. It’s also discussing changing something known as the “foreign direct product rule” to further restrict Huawei’s access to products based on U.S. technology manufactured overseas by non-U.S. companies.

Trump’s tweets on Tuesday were welcomed by the Semiconductor Industry Association, which has been lobbying against the new Huawei restrictions and arguing they would “unduly curtail” the ability of U.S. companies to sell products to China.

“As we have discussed with the Administration, sales of non-sensitive, commercial products to China drive semiconductor research and innovation, which is critical to America’s economic strength and national security,” said John Neuffer, the SIA’s president and CEO.

China’s foreign ministry earlier on Tuesday accused those pushing a ban on the GE engine exports of seeking to “wantonly oppress China.”

The discussions over banning the sale of the GE/Safran Leap 1C engine to China were first reported by the Wall Street Journal over the weekend. Some administration officials were considering whether sales could help Chinese companies reverse engineer the technology used and speed up the development of their own jet engine programs.

GE, which has lobbied heavily against being blocked out of what it sees as a promising new market, said in a statement Monday that it had decades of experience selling products internationally. “We aggressively protect and defend our intellectual property and work closely with the U.S. government to fulfill our responsibilities and shared security and economic interests,” a spokesperson for the company said in an emailed statement.

The engine has been approved for sale to China multiple times since 2014 and a dozen of the engines have already been shipped to Comac, Bloomberg reported Monday.