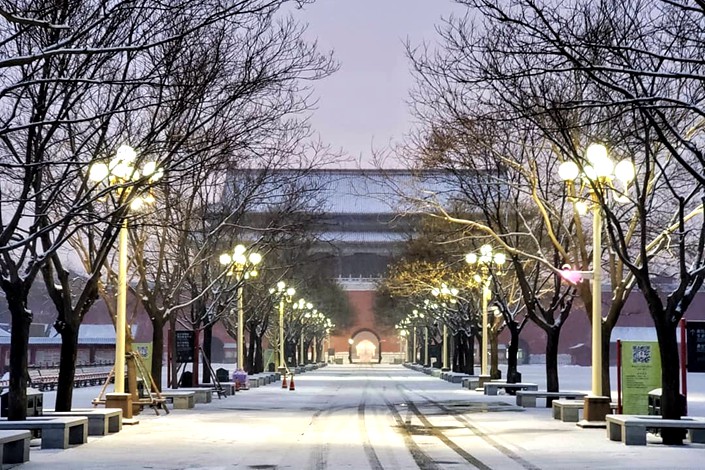 The moment I knew it was time to close the office was when our contractor vanished. Work stopped on our half-done office renovation, newspaper lying on the ground to catch paint drops, bags of cement leaning on each other in the center of the small courtyard. “I have to go home.” he texted me. “The buses and the streets are empty. It’s too dangerous in Beijing,” he said. He didn’t want to catch the virus.

The outbreak he was referring to was SARS, in 2003. Seventeen years later I’m in a similar situation with the new coronavirus, albeit scaled up multiple times on all fronts.

Back then, I spent two weeks talking to clients on the phone, canceling or rescheduling their trips. When the dust settled, we looked at the numbers and decided the company could survive for one year if I took no salary, we paid staff a quarter of the wages and sent everyone home. We hoped that would be long enough to outlast the crisis, and luckily we were right.

This time, cities around the country have been locked down, some for weeks at this point. The virus has sickened tens of thousands of people in over two dozen countries. My colleagues in the travel industry are waking up to a dizzying reality: We will have no business for the foreseeable three to six months, or even longer. What’s next?

While no one should underestimate the threat of a drawn out war on the virus, I do want to tell travelers and travel providers one thing, based on my experience: Defer, don’t cancel. We can come out of this stronger, together.

First, the allure of exploration is stronger than fear. People who love travel will always travel. They may take a break, but they’ll hit the road again as soon as possible.

When 9/11 occurred, my business was only in its second year. The phone rang nonstop and emails flooded in — all cancelations for the fall season of 2001. We were doomed, I was convinced. By December, a few adventurous travel agents were testing the water. By March, we were sending travelers all over the country. By May 2002, we were at our limit.

SARS followed in February 2003. I closed our office in May, and by July, clients were emailing us eager to get their fall travel sorted out.

A few other colleagues from other destinations share this experience. Karen Fedorko Sefer of Sea Song Travel in Turkey told how her company weathered a series of attacks in the country a few years ago, from a January 2016 terrorist attack to a military coup attempt in June, followed by a nightclub bombing on New Year’s Day in 2017. At the time, the industry saw no hope at all. But travelers returned, bit by bit, and 2019 was a bumper year.

Journey Mexico’s Zachary Rabinor recounted leading his company through the H1N1 epidemic in 2009. Travelers returned with pent up demand the year after.

So I urge my Chinese travel industry colleagues not to despair. Clients will return.

Knowing that travel will eventually resume, and knowing a China trip cannot be replaced by any old beach vacation, businesses should try to hold on to cash by persuading people to defer, not cancel. Deferring offers hope, while canceling signals danger.

Though of course, I am talking about appealing to travelers to help us through hard times within legal and ethical parameters.

Also, I fundamentally believe in the Chinese word for crisis — “weiji” — literally translated as crisis opportunity. Any crisis is an opportunity in disguise.

I’ve heard many colleagues complain of the difficulty in handling customer cancelations this week. Clients are angry, they say.  I can imagine why but I also believe this is where a huge opportunity exists.

For travel providers, a crisis like the coronavirus is a perfect time to build a much stronger bond with the customer. And for travelers, this is a terrific opportunity to have a better trip. How’s that possible?

My most memorable experience of the Forbidden City was during the peak of SARS. Beijing emptied out completely, but somehow the government kept the imperial palace open. So, my husband and I took our 10-month-old in a carrier and strolled through the spacious halls and courtyards, imagining the grand imperial ceremonies without a soul in sight. It was like viewing the Mona Lisa in the Louvre without the crowd.

This is what the Forbidden City looked like during the first week of February.

This time around, all tourist sites are closed, so I am not suggesting anyone to travel to China now. But if anyone has trips planned for May and June, I’d say, hold on to them. The virus may be completely over by then and there may be a once in a lifetime opportunity to see China without crowds.

Besides, cash-starved hotels may be willing to offer cheap deals, and also the best guides and restaurants may be available then. Don’t miss out.

I once had a brief exchange with a famed U.S. diplomat Richard Holbrooke. He invited my husband and me to a state dinner, then for security reasons he had to disinvite me when he found out that it was restricted to U.S. citizens. He called me personally to apologize. I was so impressed that such a busy person would go to the trouble to call that I didn’t mind at all. He told me, “I always deliver bad messages personally.”

So many of us hide behind computer screens when dealing with clients. This is a huge opportunity to be proactive and reach out to each individual client, provide some on-the-ground updates from China, tell them that we recommend they delay their trip to late spring or fall, assure them that the money paid will be there 100% for the future trip. Also, the guides and drivers need their support to make a living when the crisis is over.  I am often touched by how much empathy our clients have shown us at times like this. They want to help people as well.

One of the toughest decisions travel providers will have to face is what to do with the staff that now suddenly has no work to do. For this, my advice is do the best you can, act out of compassion, speak truthfully, and offer the best compensation package that won’t endanger the business. If you keep the best employees through hard times, they will save the business in times of need.

After that, I recommend all those staying home watch a documentary on Sir Ernest Shackleton, who led three British expeditions to the Antarctic. On one of the voyages, their ship got stranded on ice, they could not advance nor retreat. Facing a long idle winter, he exhibited extraordinary leadership to guide the crew out of danger.

At difficult times, when emotions are heightened, channel them toward compassion, not anger. As one of Shackleton’s famous quotes goes, “Difficulties are just things to overcome, after all.”

As my sister-in-law once told me, hardship can either be glue or a divider, depending on the approach. It’s up to each one of us to choose. I choose not to dwell on the gloomy news; I also choose to delay my trip back to China, instead, stay home, eat, exercise and bond with relatives and colleagues.