Opinion: After Abe, Japan Will Need Even Bolder Economic Reforms 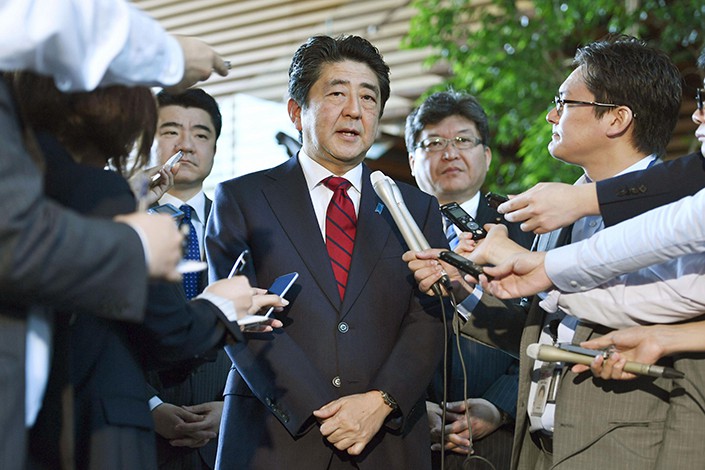 Since taking office at the end of 2012, Japanese Prime Minister Shinzo Abe has transformed the country’s macroeconomic management. But the “Abenomics” experiment may soon start drawing to a close. Although Abe’s term as head of the ruling Liberal Democratic Party does not end until the autumn of 2021, the succession debate has already begun. It is therefore an appropriate time to assess the effectiveness of his policies, and what might come next.

The hallmark of Abenomics has been aggressive monetary easing under Bank of Japan (BOJ) Governor Haruhiko Kuroda, whom Abe appointed in March 2013. Kuroda, previously one of the leading internationalists at the Ministry of Finance (MOF), has been instrumental in rapidly expanding the BOJ’s balance sheet — to a degree comparable to the BOJ’s American and European counterparts. This represents a clear break from the policies of his predecessor, Masaaki Shirakawa, who belonged to the BOJ’s mainstream conservative bureaucracy.

Under Kuroda’s watch, Japan’s average annual inflation between 2013 and 2019 was 1.1%, according to the International Monetary Fund. That represented a marked improvement from the previous five years under Shirakawa, when inflation averaged -0.2%. In fact, as Columbia University’s Takatoshi Ito and Takeo Hoshi of the University of Tokyo argue in their recent book “The Japanese Economy,” the BOJ’s tight monetary policy before Abe took office worsened Japan’s deflation problems.

Regarding fiscal policy, the Abe administration, under pressure from the mainstream fiscal hawks of the MOF, raised the consumption-tax rate from 5% to 8% in April 2014, in line with a 2012 agreement with the Democratic Party of Japan (DPJ). But the unexpectedly sharp economic slowdown that followed led Abe to postpone the next planned hike (to 10%) from 2015 to 2017, despite objections by MOF officials. The 10% rate eventually was introduced in October 2019.

Japan’s exceptionally high level of public debt — nearly 150% of GDP in 2018 — means that any government must consider revenue-increasing measures, while recognizing that they can be a severe impediment to economic growth. Fine-tuning the size and timing of such measures is therefore critical, and it requires a maestro’s touch to get it right.

The Abe administration approached October’s consumption-tax hike very cautiously, implementing it alongside counterbalancing measures such as reduced rates on foodstuffs. But that was not enough to offset the tax policy’s negative effects. Strained by the hike, as well as by the fallout from Typhoon Hagibis, Japan’s economy shrank by an annualized rate of 6.3% from the previous quarter in October-December 2019.

The longer-term effects of that contraction — which may be aggravated by the Covid-19 outbreak — remain to be seen. Nonetheless, the Abe administration has prevailed over Japan’s powerful policy establishment at the MOF and BOJ, not least because of the shift of political power to the Kantei (the name of the prime minister’s official residence) and the composition of Abe’s team: current and former government officials from outside the mainstream elite bureaucracy. Moreover, Abe was greatly helped by the lack of effective opposition in the Diet, as widespread disappointment with the previous DPJ-led administration enabled him to win one election after another.

But now, although Japan’s avoidance of deflation in recent years was no mean achievement, Abe’s successor will face two big challenges. The first is to boost economic growth, an area where Abenomics has underperformed. While monetary and fiscal policies have strengthened Japan’s insufficient aggregate demand, average annual 1.1% growth under Abe demonstrates that this alone is not sufficient.

In particular, Japan must implement supply-side policies that enhance productivity. BOJ estimates of potential growth rates between 2013 and 2019 show that much of the contribution came from expansion of the country’s workforce and capital stock, while the contribution of productivity gains has actually declined under Abenomics. Moreover, Japan needs higher growth to finance its mounting social-security costs. If pro-growth policies remain unfocused, the fiscal burden ultimately will destroy the economy.

The top priority must be to create a vibrant job market and accelerate the economy’s shift to more productive sectors. The next imperative is bold regulatory reform to encourage new market entrants; Japan still maintains strict, nontransparent regulations to protect its old-fashioned taxi industry from ride-sharing services, for example. Establishing a nurturing environment for startups that eventually can replace Japan’s old industrial behemoths is another challenge, requiring a new government agency devoted to innovation. Policymakers also must urgently upgrade the country’s education system for the digital age.

These policies will require political courage to overcome strong vested interests, and the wisdom to embrace continuous policy improvement. It is a pity that Abe did not spend his tremendous political capital on the critical economic agenda, with the exception of trade agreements such as the Trans-Pacific Partnership. His successor will have to make a much stronger long-term commitment to pro-growth policies.

The second challenge is to energize the government bureaucracy. In sharp contrast to the United States, where institutions and experts compete to provide policymaking services, Japan’s bureaucracy is a de facto monopoly supplier.

Following institutional reforms aimed at exerting effective political leadership over the silo-minded bureaucracy, a central personnel authority, controlled by powerful politicians in the cabinet, now vets senior Japanese civil servants. But many critics claim that this system encourages officials to tell politicians only what they want to hear, and stifles bottom-up initiatives.

That is too bad, because Japan urgently needs a new style of policymaking in which well-informed, open-minded civil servants offer expert options for decision-makers. But returning to traditional seniority-based personnel practices within ministerial bureaucracies is not an option. Instead, Abe’s successor must try to overhaul the bureaucracy by establishing a transparent, merit-based evaluation and appointment system.

Seven years of Abenomics have produced some notable results. But Japan’s next government must focus squarely on the supply-side and administrative reforms needed to accelerate and sustain economic growth.

Akira Kawamoto, a former deputy director general in Japan’s Ministry of Economy, Trade, and Industry and a former OECD principal administrator, is a professor at Keio University.