Opinion: A Pandemic of Deglobalization? 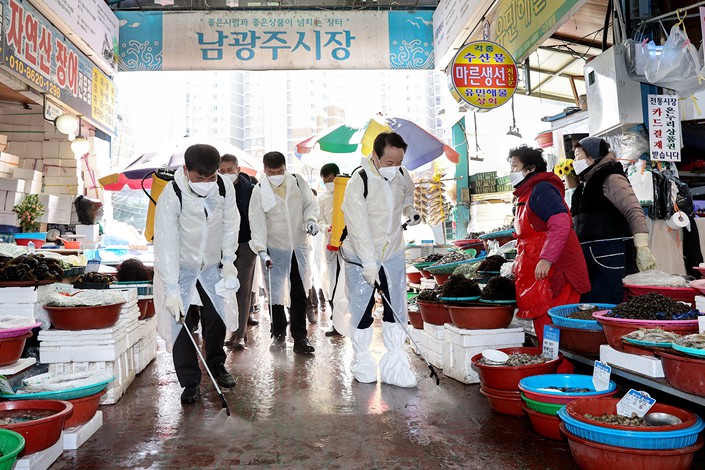 History offers intriguing precedents for what might come next from the Covid-19 epidemic.

The outbreak of the new coronavirus that began in Wuhan, China, may well turn into a global pandemic. More than 50 countries have confirmed cases of the virus, and some aspects of the transmission mechanism remain unclear.

Pandemics are not just passing tragedies of sickness and death. The omnipresence of such mass-scale threats, and the uncertainty and fear that accompany them, lead to new behaviors and beliefs. People become both more suspicious and more credulous. Above all, they become less willing to engage with anything that seems foreign or strange.

Nobody knows how long the Covid-19 epidemic will last. If it does not become less contagious with the arrival of spring weather in the northern hemisphere, nervous populations around the world may have to wait until a vaccine is developed and rolled out. Another major variable is the effectiveness of public health authorities, which are significantly less competent in many countries than they are in China.

In any case, factory closures and production suspensions are already disrupting global supply chains. Producers are taking steps to reduce their exposure to long-distance vulnerabilities. So far, at least, financial commentators have focused on cost calculations for particular sectors: automakers worried about shortages of parts; textile makers deprived of fabric; luxury goods retailers starved of customers; and the tourism sector, where cruise ships, in particular, have become hotbeds of contagion.

But there has been relatively little reflection on what the new climate of uncertainty means for the global economy more generally. In thinking through the long-term consequences of the Covid-19 crisis, individuals, companies, and perhaps even governments will try to shield themselves through complex contingent contracts. It is easy to imagine new financial products being structured to pay out to automobile producers in the event that the virus reaches a certain level of lethality. The demand for novel contracts may even fuel new bubbles, as the money-making possibilities multiply.

History offers intriguing precedents for what might come next. Consider the famous financial crisis following the “tulip mania” in the Netherlands between 1635 and 1637. This episode is particularly well known because its lessons were popularized by the Scottish journalist Charles Mackay in his 1841 book, Memoirs of Extraordinary Popular Delusions and the Madness of Crowds.

To Mackay, the tulip crisis seemed to prefigure the speculative surges of capital into railroads and other industrial developments in North and South America during his own time. Throughout the book, he milks the episode for all its humor, recounting stories of ignorant sailors literally swallowing a fortune by mistaking tulip bulbs for onions.

But as the cultural historian Anne Goldgar reminds us, Mackay neglected to mention that the mania coincided with the exceptionally high mortality of the plague, which was spread by the armies fighting the Thirty Years’ War in Central Europe. The plague hit the Netherlands in 1635, and reached its peak in the city of Haarlem between August and November 1636, which is precisely when the tulip mania took off.

The rush of speculative capital into flower bulbs was fueled by a wave of cash windfalls accruing to the surprised heirs of plague victims. Tulips served as a kind of futures market, because the bulbs were traded during the winter when no one could examine the character of the flower. They also became the subject of complex contracts, such as one that stipulated a price to be paid if the owner’s children were still alive in the spring (otherwise, the bulbs would be transferred gratis).

The financial speculation in this wild, apocalyptic environment was born of uncertainty. But it has often been reinterpreted as evidence of craven materialism, with the bust representing an indictment of godless luxuries and foreign exotica. Tulips, after all, originally came from the alien culture of Ottoman Turkey.

Like today, early modern Europe’s plague epidemics spawned vast conspiracy theories. The less obvious the origin of the disease, the more likely it was to be attributed to some malign influence. Stories circulated about sinister hooded figures going door to door “anointing” surfaces with contagious substances. Outsiders ⁠— foreign merchants and soldiers ⁠— as well as the marginalized poor were fingered as the culprits.

Again, a nineteenth-century source offers powerful lessons for today. In Alessandro Manzoni’s 1827 novel “The Betrothed,” the plot reaches its high point during the plague outbreak in Milan in the 1630s, which was considered a scourge introduced by foreigners, not least the foreign Spanish Habsburg monarchy that ruled Milan. The novel became a potent catalyst for Italian nationalism during the Risorgimento movement for Italian unification.

Not surprisingly, the Covid-19 epidemic is already playing into today’s nationalist narratives. To some Americans, the Chinese origins of the disease will simply reaffirm the belief that China poses a danger to the world and cannot be trusted to behave responsibly. At the same time, many Chinese will likely see some US measures to combat the virus as being racially motivated and intended to block China’s rise. Conspiracy theories about the US Central Intelligence Agency creating the virus are already circulating. In a world flooded with disinformation, Covid-19 promises to bring even more.

As the Dutch historian Johan Huizinga showed, the period following the Black Death in Europe turned out to be the “waning of the Middle Ages.” For him, the real story was not just the economic aftereffects of a pandemic, but the mysticism, irrationalism, and xenophobia that eventually brought an end to a universalist culture. Likewise, it is entirely possible that Covid-19 will precipitate the “waning of globalization.”

Harold James is a professor of history and international affairs at Princeton University and a senior fellow at the Center for International Governance Innovation.