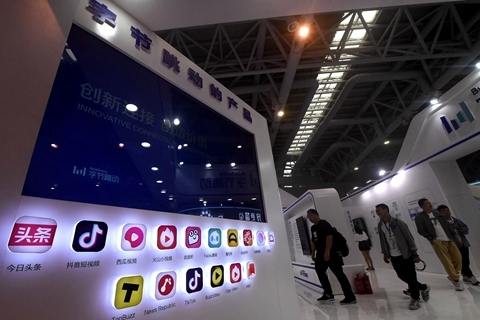 It marks the latest example of Tencent obstructing rivals from its ubiquitous platform. The company has a workplace app similar to Feishu called WeChat Work.

Feishu said in a notice Saturday that it received complaints from some of its users, who said that they could not access the app’s links shared on WeChat, because they allegedly contained “misleading” content. Instead, Feishu users have to copy the links and open them in a separate browser.

Feishu said that it had not been informed of problems in advance, saying that the barriers have disrupted the work efficiency and experience of its users.

A source close to Tencent claimed that the company’s move to curb Feishu stems from its own policy introduced in October, which barred links from third-party websites or apps that redirect users, misleads them or compels them to download or share content.

Users of Alibaba’s DingTalk, another collaboration app, are also unable to directly share name cards on WeChat, but can open links to the app’s website and live broadcast rooms.

WeChat’s move comes as remote working software gains traction in China amid the Covid-19 outbreak, forcing many of the country’s companies to move business activities online.

As of Mar. 2, DingTalk was the most downloaded app in the business category on Apple’s App Store. WeChat Work and Feishu ranked 3rd and 15th respectively.