Opinion: In Fight Against Covid-19, It’s Not Too Late for Japan 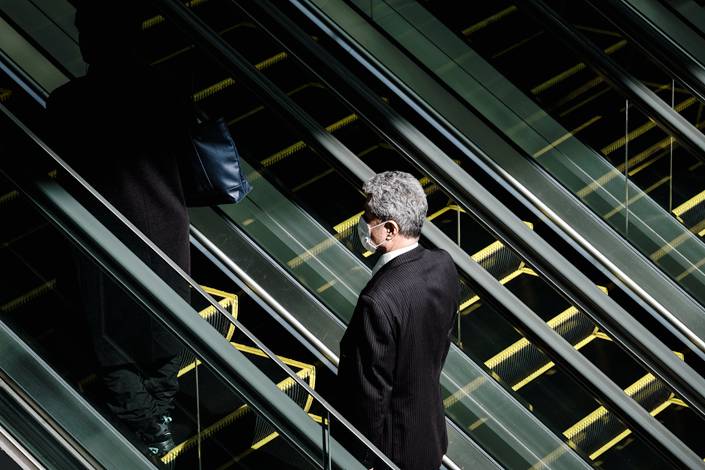 A man wearing a mask rides an escalator in Nagoya, Japan. The Japanese government is considering emergency legislation to deal with the growing global coronavirus outbreak. Photo: IC Photo

It is said that China’s disease control measures managed to buy time for the rest of the world.

Measures including suspending public transport, restricting people from leaving their homes, and locking down cities including Wuhan, ground zero of the epidemic, both figuratively and literally quarantined millions in China.

If a pandemic still takes place, it means that the world wasted this ounce of time, having spent it all on going over old disease prevention methods.

As Covid-19 spreads globally, Japan is among the countries that will be tested next. Will patients overwhelm its hospitals? If so, when?

Over the course of its own outbreak, Japan, which has experienced some community transmission, has adapted only some of these strategies. It continues to provide care mainly for those with acute illnesses, allowing suspected cases and those with mild symptoms to be quarantined at home. To try and slow down the spread, it has cut down on public events and dialed up public health education and warnings.

Yet the country continues to limit the number of tests being done.

Whether or not the medical system can support the volume of patients and whether the public continues to accept health directives are two ways to assess whether Japan’s measures are successful.

Luckily, those with severe illnesses have not yet overwhelmed hospitals.

To prevent this from happening, the number of infected must be kept low. Spacing patients out both geographically and chronologically also reduces the impact on the medical system, and measures to cut down on public gatherings, or potential concentrated outbreaks, will be helpful.

There are also countries from which Japan can draw lessons.

What failed in China

Looking back, the lesson learned in Wuhan is that the right measures were not in place in time, only their pretense. In reality, both internal medical protocols and outward-facing public health measures were lax, when both should have been tightened and implemented by both health professionals and the community.

In most countries, the concentrated quarantines of suspected cases or those with mild symptoms is not acceptable. If a pandemic is inevitable, Japan will have to be vigilant against cross-contamination in hospitals, prepare makeshift quarantine facilities, and speed up manufacturing of equipment used to provide life support for critically ill patients.

But Japan has key differences compared with China. First, its measures to prevent cross-contamination will be more adequate. Second, it has cut down on public activities in step with the epidemic situation. Third, it has shared ample public information. Now it remains to be seen how much of a difference this has made.

What worked in Singapore

Transparent public information, clear guidance, strict implementation. For a city-state like Singapore, several hundred cases isn’t insignificant, but thanks to these measures, all have clear origins, appropriate controls, all while the country maintains sensible allowances.

For such breathing room to be feasible, public information is a prerequisite, as is trust between the people and the system.

What could work in the U.S.

Starting this week, the U.S. Centers for Disease Control and Prevention (CDC) has decentralized nucleic acid testing for Covid-19. The country’s Food and Drug Administration (FDA) has said that within the week, there will be enough capacity to test nearly 1 million people. This is a staggering number.

The reason that the U.S. is able to unleash this much capacity is because it is allowing private businesses and research labs to develop and verify the tests used for Covid-19, bypassing the government’s bottleneck.

The country’s own evolving situation, including community transmission, six deaths in Washington state and roughly 600 or more infections forced it to switch up its existing disease control measures. I think, as a result, the number of detected cases in the U.S. could exceed 1,000 within the week.

While I’m personally not optimistic about Japan’s strategy, I don’t believe that, just because Japan’s measures are akin to those used in Wuhan in its early days, that the country or those with similar measures will incur heavy losses.

Japan has about 2,000 beds reserved for infectious disease and can handle 20,000 simultaneous acute illnesses if they are sufficiently spread out throughout the country. If these cases can be spread out over time as well, the country’s chances will be even better.

I hope Japan can pass this test, because it will mean one less calamity in the world.