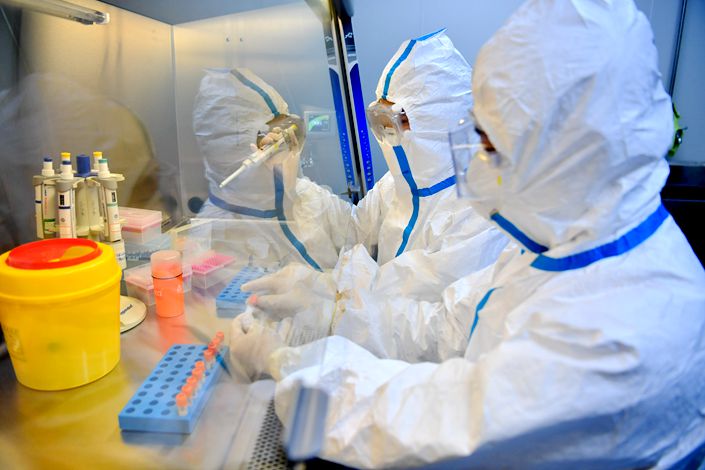 A new study by Chinese researchers suggests not only that two major strains of the deadly new coronavirus exist, but also that China’s intrusive lockdown measures at the center of the outbreak may have concentrated the more infectious strain in the disease-hit city of Wuhan.

The study was published this week in the National Science Review, a peer-reviewed journal affiliated to the Chinese Academy of Sciences. It compared 103 publicly available genomes of SARS-CoV-2, the virus that causes the pneumonia-like illness called Covid-19.

Researchers concluded that the ongoing epidemic may be caused by two main virus strains, one of which spreads faster and replicates more rapidly inside the body than the other. They also suggested that human intervention may have restricted the spread of the more infectious variety beyond Wuhan, and that infection by multiple strains of the virus at once may be possible.

By analyzing the 103 genomes, scientists found that the virus has evolved into two main types, which they called “S” and “L.” The “ancestral” S type accounted for 30% of the samples, while the L type, which seemingly evolved from it later, made up the remaining 70%.

That led researchers to conclude that the S type is less transmissible and slower to replicate than the “L” type, which also had a much higher number of derived mutations, suggesting a higher rate of replication.

“Thus, our results suggest the L might be more aggressive,” the study’s authors wrote.

It remains unclear whether the L type is more harmful to human health and whether it evolved from the S type in humans or in an intermediate host, researchers said.

Evidence also suggests the L and S types do not account for all infections. For instance, a virus isolated from one Covid-19 patient in Shenzhen had traits belonging to neither type, the researchers noted.

Wuhan: A hotbed for L-type infections?

According to data in the study, 26 out of 27 viruses isolated from patients in Wuhan were of the L type while only one was S type. But outside Wuhan, only around 60% of the viruses researchers obtained were L type.

In addition, chronological data shows the L type was more prevalent in the early stages of the outbreak and that its frequency decreased after early January 2020, the study said.

Based on that information, the authors hypothesize that L type is significantly more prevalent in Wuhan than in other places and may have been prevented from spreading farther out of the city by the effective lockdown and quarantining of large parts of Hubei, the province where Wuhan is located.

“These human intervention efforts might have caused severe selective pressure against the L type,” researchers wrote.

However, the study’s authors cautioned that the analyses were based on “very patchy” collections of genomes and that more comprehensive data and further testing of the hypothesis were necessary before drawing conclusions.

Infections may result from multiple strains at once

The researchers cited one example of a U.S.-based patient whose virus sequence, isolated Jan. 21, had seemed to feature characteristics of both L and S types of SARS-CoV-2.

“Although novel mutations could lead to this result … we inferred this patient might have been infected by at least two different strains of SARS-CoV-2,” the researchers wrote, adding that while a few other examples appeared similar, they did not find any other instances of co-existence of the two strains of the novel coronavirus, and that further study was necessary.

The virus’ animal hosts remain a mystery, but this is different from SARS

According to the study, the new coronavirus only bears about 79% similarity to the one that causes severe acute respiratory syndrome (SARS), which infected thousands of people in southern China and killed 774 globally between 2002 and 2003. It is also only about 50% similar to the pathogen that causes the deadly Middle East respiratory syndrome.

Based on genome comparisons with other coronaviruses, scientists ranked a bat-borne SARS-like pathogen called “SARSr-CoV; RaTG13” most similar (96.2%) to the Covid-19 virus. That was followed, in order of decreasing similarity, by two pangolin-borne viruses, two more bat-borne viruses, the human SARS virus, and finally another bat-borne virus.

The scientists cautioned that the genetic variations between SARS-CoV-2 and other viruses were greater than they appear. Despite its overall similarity with the bat-borne RaTG13, the virus at the center of the current outbreak seems to behave more like one of the pangolin-borne pathogens in the way it enters human cells.

Still, the authors concluded that, based on their analysis, the similarities to the pangolin virus may be “coincidental” evolution based on a high mutation rate and “strong natural selection” rather than as a result of recombination.