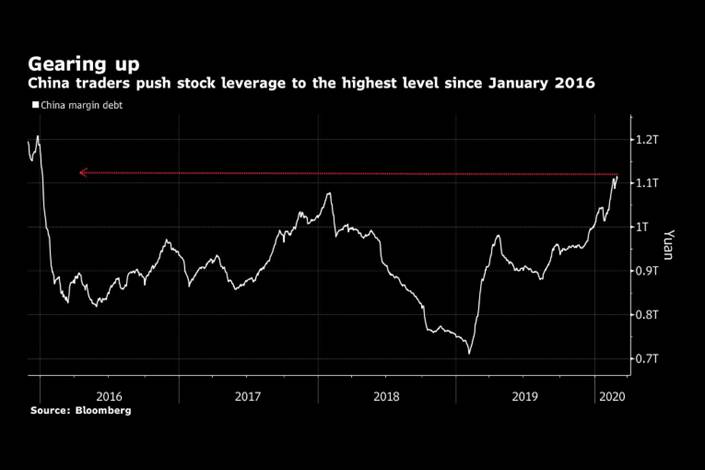 (Bloomberg) — The recent buoyancy in the world’s second-largest stock market in China was under threat Monday after oil plunged and U.S. index futures tumbled.

A gauge of stocks in Shanghai and Shenzhen fell 2.1% as trading opened, led by oil producers. An index of Chinese shares traded in Hong Kong dropped as much as 4.3%, its biggest loss on a closing basis in two years. Midway through the morning session the Shanghai benchmark index was down 2.5%, while Hong Kong's Hang Seng Index was down 3.6%.

China's three oil majors were all down sharply, led by a 15% drop in Hong Kong-listed shares of China National Offshore Oil Corp. (CNOOC), which relies heavily on developing and selling crude oil. Oil prices earlier dropped 31% after the disintegration of the OPEC+ alliance, in their worst decline since the 1991 Gulf War. PetroChina's Hong Kong-listed shares were down 9%, while Sinopec was down 5.6%.

China’s CSI 300 Index touched a two-year high last week, rebounding as much as 14% from its coronavirus low, as speculators took advantage of easier liquidity conditions to bet on sweeping government stimulus. Such optimism was a glaring contrast to the gloom enveloping global markets: the CSI 300 beat the MSCI Inc. measure of global shares by more than 4.5 percentage points for a third week, unheard of since 2014.

With China’s $1.2 trillion stock rally fueled mostly by hope and leverage, the risk for Communist Party officials now is that fear becomes the dominant emotion, sending markets spiraling down. That would undermine efforts to ensure financial stability as authorities try to restart an economy that’s been mostly shuttered for more than a month.

Data over the weekend showed the impact of the virus on China’s trade with the rest of the world. The drop in exports was a bigger-than-expected 17.2% in dollar terms, while imports declined 4%, according to a statement from Chinese customs Saturday.

Recent gains had been led by technology shares, with the ChiNext gauge surging 22% this year through Friday. The index slid 1.8% on Monday.

“Pundits believe that Chinese stocks, especially the ChiNext at extremely overbought levels, can offer risk shelter for the extremely oversold global stocks,” Hao Hong, chief strategist of Bocom International Holdings Co., wrote in an email Monday. “It is a reckless call. The Chinese stock market is diverging from fundamentals. And a ChiNext bubble is looming.”

Low valuations may support Chinese equities. The Shanghai Composite trades at less than 11 times its members’ projected earnings, versus a peak of 19 times in 2015. In the U.S., the S&P 500 Index currently trades at about 17 times profit. The government can also count on largely state-owned brokerages and insurers to limit selling, while the largely closed off nature of China’s markets makes it more immune to swings in other markets.

There was little sign of concern toward China in the currency market on Monday morning, with the offshore yuan strengthening 0.3% against the dollar in its 11th day of gains out of the past 12.