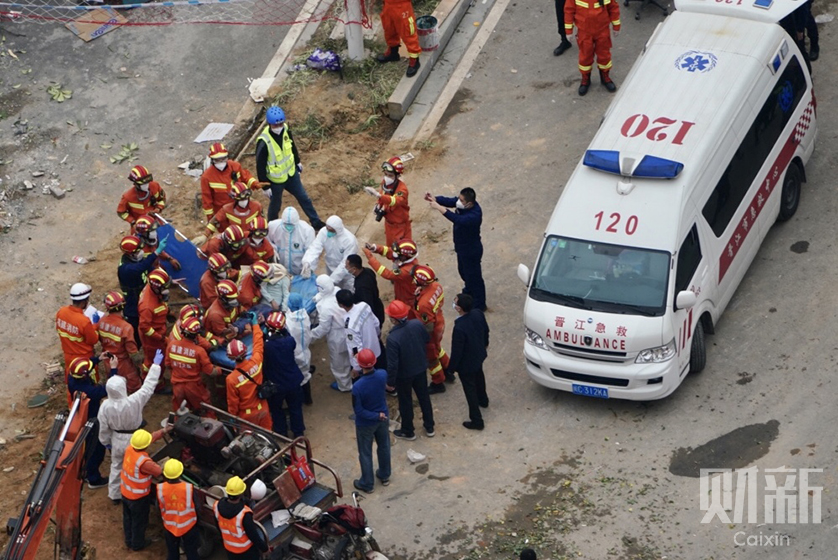 The rescue team continues to search for over 20 people who are thought to still be trapped in the debris. Photo: Wei Shumin/Caixin

A hotel being used as a coronavirus isolation facility in eastern China collapsed on Saturday evening, leading to at least 12 deaths and trapping dozens, according to the local authorities.

Xinjia Hotel in Quanzhou, a city in the province of Fujian, collapsed on Saturday evening, with 71 people initially trapped in the debris, according to a notice released by the local district government.

As of early Monday afternoon, 50 people had been found by the rescue team, according to the official People’s Daily (link in Chinese). Eleven people died at the scene, while one later died in hospital. Nine other people managed to free themselves from the rubble.

Rescuers are still searching for the 21 people still thought to be trapped.

The hotel was being used as an isolation facility for people who had come into close contact with Covid-19 patients or who needed to be quarantined for other reasons, several local residents told Caixin.

At the time of the accident, a total of 58 people were quarantined in the hotel, and they had all previously tested negative for the coronavirus, according to the local government.

Though no official reason has been given for the collapse, Caixin has learned that the interior of the building had recently been renovated.

The seven-story hotel was reopened in 2018 after extensive construction work, with about 80 guest rooms from the fourth floor to the seventh floor, according to a third-party hotel booking platform.

A structural engineer close to the accident investigation team told Caixin that the owner had built mezzanines that were too heavy for the structure to bear.

The hotel was built around a four-story steel frame structure, but the engineer said the investigation team had found that the owner added three extra floors.

A person involved in the rescue also said that the hotel owner used a large amount of bricks to build the mezzanines. “Just imagine how many bricks you need if you want to put in three floors in the middle,” the person said.

Since November 2018, the hotel had twice been cited by the police for violations pertaining to guest registry, and was listed as an “abnormal operation” as it had failed to submit an annual report.

The source also said that half of the building’s ground floor had a hollow structure with ceilings nearly six meters high. “The main problem could be that the calculated bearing capacity couldn’t hold the weight after renovations,” the source said.

An advertiser who had installed an outdoor billboard on the building told Caixin that the building had shop signs and external air conditioners and other equipment installed on the outer wall of the building and that a row of steel billboards were also installed.

A document filed by the hotel to the local fire department, which has been obtained by Caixin, showed that the project was described as “interior renovation” and was designed and carried out by Guangdong Hongye Architectural Design.

However, a technical director at Guangdong Hongye told Caixin on Sunday that the company has no record of working on the Xinjia Hotel and that the company doesn’t allow others to file such applications using its name.

This disaster has put a spotlight on a gap in how these kinds of renovation projects were until recently overseen by local authorities. Prior to April, an “interior renovation” project would need to be registered separately with both the local housing authorities and the fire department.

However, a source familiar with the construction industry said filing an application with the housing department is troublesome and the department has little ability to proactively track down new projects, so many property owners simply skipped this part of the process. Most however do register with the fire department, but it only checks if a building meets fire regulations, not its structural condition.

This system was changed in March 2019, when housing departments nationwide were told to take over fire inspections and renovation supervision duties.

The structural engineer said that if this change had been made earlier, this tragedy would not have happened. “For a large-scale construction project like the Xinjia Hotel, there’s a large chance that the housing department would not approve it. Even if it did, it would first ask the owner to reinforce the structure, which could be costly,” the engineer said.

This story was updated with additional information.