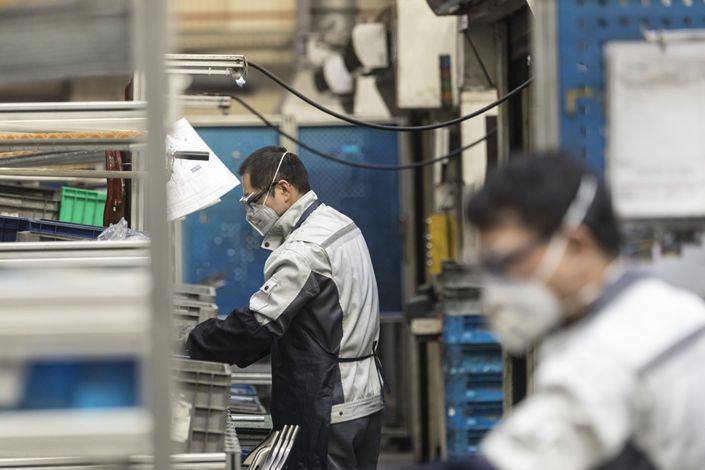 (Bloomberg) — Just as China’s factories get back on their feet after being laid low by the coronavirus, a drop in demand from their biggest trading partners around the world is coming back to give them another hit.

Manufacturing firms across China told Bloomberg News that they are close to being able to resume full production as domestic infections slow to a trickle, but are now facing canceled orders and fewer opportunities to gain new customers as the virus grips elsewhere.

“We are actually more worried about the development of the epidemic in Europe and the U.S., which will affect their domestic consumption,” said Mark Ma, owner of Shenzhen-based Seabay International Freight Forwarding Ltd. The company relies on those regions for 80% of its business, with about one-third of the goods it handles being sold on Amazon. “China’s manufacturers have no big problems taking orders and producing, the main problem now is how the epidemic is contained overseas.”

Weaker demand from developed markets is now posing a fresh risk to China’s restart, with the world’s second-largest economy already facing its first quarterly contraction in decades and the weakest year since the early 1990s.

That could feed a global vicious cycle, which in a worst-case scenario, adds to recessions in the U.S., the euro area and Japan to chop some $2.7 trillion off global output, according to Bloomberg Economics.

“The feedback loop is emerging,” said Trinh Nguyen, Hong Kong-based senior economist at Natixis. “As China recovers and resumes its supply chains, it will be hit by demand shocks from its own subdued demand and an increasingly infected world.”

Almost 81% of 2,552 Chinese companies involved in trade have resumed operations, according to a customs administration survey released on Saturday. Export data for January and February published at the weekend gave a taste however of what may lie ahead: Sales abroad dropped more than expected, by 17.2% in dollar terms.

David Ni runs a Nanjing-based company that buys aluminum alloy car wheels from Chinese producers and exports them to U.S. retail outlets, and he was planning to showcase his products at the Inspired Home Show in Chicago in mid-March. It was canceled last week, handing him a demand-side problem to match the supply-chain difficulties he already faced in China due to factory closures.

“I’d booked hotel, flight ticket, and a booth — everything was ready,” said Ni, who’s based in Los Angeles. “But seeing the situation in the U.S., I began to feel afraid of going on business trips.”

Producers are being squeezed as well. Jing Yuan is the CEO of a company making capacitors, a vital part of electronic circuit boards, in Anhui province. He said that his firm has been fully back at work since the end of February, but suppliers of its raw materials in South Korea have raised prices by 50% and delivery time has more than doubled. South Korea has been one of the worst-hit nations by the virus outside China, with more than 7,000 cases.

A survey by Made-in-China.com — one of the main platforms connecting Chinese suppliers and global buyers — found that by late February, 80% of manufacturing firms had resumed operations. By late April, says general manager Li Lei, production capacity should be back to normal.

But there are knock-on effects. The overseas companies they supply are only now feeling the effects of the time those Chinese factories spent offline, according to Ben Chu, the website’s editor-in-chief. “Due to the lagging effect, the other parts of the global supply chain outside China are now in the midst of difficulty,” said Chu.

The risk that the outbreak isn’t actually under control in China also can’t be discounted. With the return-to-work process as yet incomplete, China could face a resurgence in cases once workers are fully back, and doubt remains over whether the government statistics show the full picture.

A manager for overseas business at a Zhejiang-based lighting company, who asked not to be named, said the virus has forced them to cancel or postpone client visits and exhibitions, meaning a likely drop in orders from countries that have been hardest hit by the epidemic including South Korea, Italy and Germany.

Despite the grim outlook, China’s policy makers are sticking to a relatively modest roster of stimulus so far, which has focused on trimming market interest rates and cutting fees and taxes for companies. At the official level, there’s little talk of a package of the scale that followed the global financial crisis in 2008. That may yet change as the policy making cycle in Beijing resumes.

The economy “will have to grapple with waves of secondary shocks from the rest of the world even as the primary shock” is being contained, he said.