Over 100 Builders Go Bust in China as Virus Strains Deepen 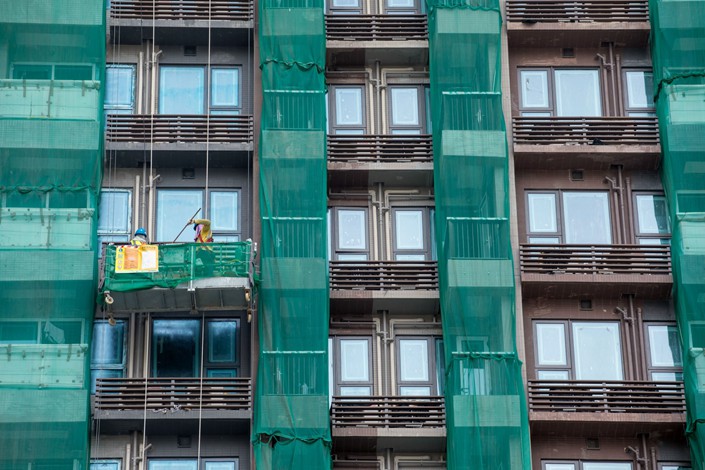 Worker labor on a construction platform at a residential building site in the Yuen Long district of the New Territories in Hong Hong on July 23, 2019. Photo: Bloomberg

(Bloomberg) — The coronavirus epidemic is accelerating a shakeout in China’s property sector as a cash crunch forces distressed developers to throw in the towel.

With lockdowns across the world’s most-populous nation entering their third month, smaller home builders are being pushed to the brink because they can’t get enough money from pre-sales of apartments to cover their costs. In the first two months of this year, around 105 real estate firms issued bankruptcy filing statements, after almost 500 collapses in 2019, data compiled by Bloomberg show.

“A vast number of mid- to small-sized developers will face a choice no one wants to make — either sell their property assets and start another business, or be bought out,” China Index Holdings Ltd. Research Director Huang Yu said. “The shakeout is just beginning.”

Even before the new coronavirus, China’s housing market was under pressure. Home prices rose at the slowest pace in almost two years in January and several developers, saddled with debt they’re struggling to service, had begun to dial back on construction. S&P Global Ratings said in a note Tuesday that as Covid-19 spreads, the squeeze may be felt most acutely by Chinese banks and property firms.

As a result, mergers and acquisitions among the nation’s almost 100,000 real estate companies will ramp up again in 2020, Yu said, declining to put a number on the expected deal value.

“Declining sales will hurt developers’ liquidity as the proceeds still form the largest and most important funding source,” S&P credit analyst Christopher Yip said, noting that with construction largely paused, delivery schedules and revenue recognition are being pushed further out. “Several companies already in the CCC category or with low ratings with negative outlooks may face liquidity issues.”

“There’ll be more bargains appearing on the market,” said Wang Yifeng, Avenue Capital’s Shanghai-based head of China. “If you see a distressed seller among the country’s top 100 firms, don’t be surprised.”

According to S&P, new home sales in China will register their first drop in 12 years this year, with transactions down as much as 15%. That’s if the virus reaches a turning point this month. If the nadir isn’t until April, sales could be down around 20%, akin to the hit taken during the 2008 global financial crisis.

Fusheng Group Co. is one of the first mid-sized developers to falter. The debt-laden company, based in China’s eastern Fujian province, was in talks to sell a 70% stake to a consortium led by Shimao Property Holdings Ltd., people familiar with the matter said in December.

Local media reported in January that a new joint venture has been established, with Fusheng injecting its jettisoned property projects into the fresh vehicle. Shimao is one of the nation’s biggest developers.

Cashflows of less competent players have been sliding for years and the virus is only making matters worse, according to Wu Rui, an executive director of nonperforming assets at private equity firm CDH Investments Fund Management Co. Asset-management companies are teaming up with top developers and eyeing such businesses, he said.

In Hubei alone, the epicenter of the virus, there are around 4,300 developers. Home prices in Hubei’s provincial city Wuhan rose at one of the fastest paces in the world last year, Knight Frank LLC data show.

To the north, in Central China’s Henan province, the general manager of one small developer said the only target his company had set, in early February, was to make all of its debt repayments over the next six months.

Another manager at a small developer based in Zhejiang, a province in China’s east, said the firm was two months away from bankruptcy. Its four projects under construction are halted because of the virus, he said.

“The epidemic could actually be a fresh opportunity for big developers,” said Liu Ce, who’s in charge of growth strategy at another large homebuilder, Shenzhen-based Kaisa Group Holdings Ltd. “We can pull many levers to alleviate cashflow stress. Once you live through that, you see the wave of asset offloading by small players as a good chance.”

Kaisa became the first, and only, Chinese developer to default on its U.S. dollar debt in April 2015. It went through a huge debt restructure and spent years rebuilding its balance sheet and credit rating.

Now, it’s regained investor confidence; Kaisa has already sold $1.2 billion of bonds this year and in January, bought a site in Hong Kong’s New Territories for HK$3.5 billion ($451 million) to expand its foothold in the city.

But while the likes of Kaisa, Shimao and China Evergrande Group have hundreds of property projects nationwide, the majority of China’s developers are small and unlisted, with sometimes just a handful of projects in one city. They’re the ones most at risk from the twin forces of coronavirus and a slowing market.

Smaller developers also typically don’t rely on bank loans or bond sales to alleviate funding concerns. Instead, they count on inflows from apartment sales, as well as shadow financing.

Policymakers have so far refrained from unleashing wholesale monetary stimulus measures for real estate firms, fearing that could result in a surge in home prices. Most support has come from marginal easing by local governments. The central bank reiterated earlier this month that real estate “definitely” won’t be used to stimulate the economy.

Shenzhen on Wednesday allowed builders to draw on some cash deposits, which are usually held in reserve by banks during construction to ensure developers don’t abandon projects. Still, local officials stressed the current home-buying restrictions won’t be loosened.

Coronavirus may be the “straw that broke the camel’s back for many small builders,” said Xie Yangchun, an analyst at China Real Estate Information Corp. “A new wave of industry consolidation has started.”