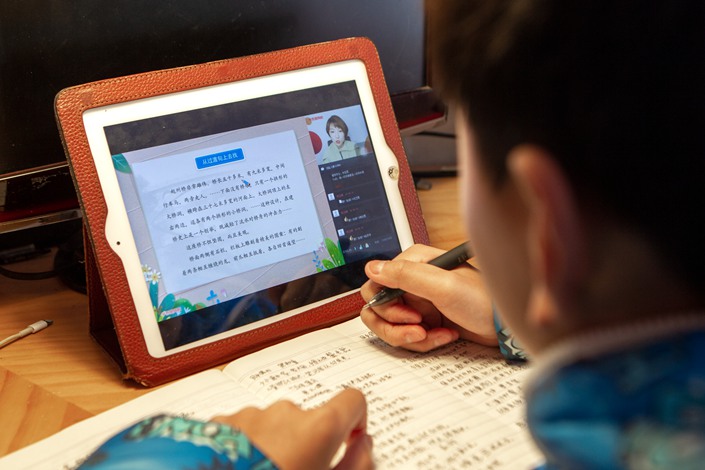 To help pupils keep up with their studies, Beijing has encouraged schools to move their courses online. Photo: IC Photo

(Nikkei Asian Review) — Stocks of Apple’s iPad are running low in China as families snap up the tablets to help with e-learning at home in response to coronavirus-related school closures.

The extra demand has come as suppliers across the country are struggling to meet production demands amid labor shortages that are also related to the virus.

Demand had been rising strongly since January when Beijing began insisting on quarantine in response to the coronavirus outbreak, sources have told the Nikkei Asian Review. One source with direct knowledge of the matter said Apple recently ordered a 20% increase in production of the latest version of the iPad for the first half of this year, compared with the production forecast the company gave to its suppliers in January before the outbreak.

“Later the need surged even higher when China opened schools but asked students to take the courses online,” one person familiar with the situation said. “The shortage of the iPad range is up to four weeks of waiting, especially for the cheaper models. The supply could not meet the pace of the demand at all.”

The unexpected robust demand for iPad series is positive news for Apple, although the U.S. company said in early February that it could not meet its revenue guidance for this quarter because of the material impact from the epidemic.

Apple and its suppliers have been severely affected by the spread of the coronavirus. Apple had to close its stores across the country for weeks, while suppliers face major challenges of constrained labor and component supplies amid the epidemic prevention efforts in the factories.

The coronavirus epidemic has killed more than 3,100 people in the country and infected tens of thousands more in China. Classes from primary school to university level have been closed since late January, with no clear timeline for re-opening.

To help pupils keep up with their studies, Beijing has encouraged schools to move their courses online, with at least 50 million students now taking classes on Alibaba’s telecommunication app DingTalk, for example.

Major Chinese e-commerce platforms, such as T-Mall operated by Alibaba Group Holding and JD.com, show most products in the iPad series as being out of stock, with waiting times for shipment ranging from a couple of weeks to one month. T-Mall allows consumers to buy up to only six iPads at a time for certain models.

JD.com and T-Mall both show that tablets made by Huawei, the second-largest tablet maker in China after Apple, are still in stock, although T-Mall is limiting purchases to one tablet per person for some models.

Apple’s iPad production in China is spread across various locations including Chongqing, Chengdu in Sichuan province, Nanjing in Jiangsu province, and Shenzhen in Guangdong province. All those plants are struggling to find enough production line workers to meet demand, another person familiar with the situation said.

“The current situation is similar to every year’s peak season to produce new versions of iPhones when production line staff need to work overtime,” the person said. “It’s still a common scene that almost everyone is struggling to recruit enough manufacturing operators at the moment.”

For the Chengdu facility, the production utilization has reached 50% of its total capacity and would increase further if the company could secure the supply of raw materials and components, a third source familiar with the matter said.

The rush to boost production at this time is rare. The first quarter of the year is traditionally a low season for iPad assemblers, when less than half of the production capacity is needed.

“China’s e-learning has sparked the demand,” the source said.

Apple, the world’s biggest tablet maker, shipped more than 48 million units of iPads globally and took more than 37.6% market share in 2019, followed by Samsung Electronics’s 16.3% and Huawei Technologies’ 10.8%, according to IDC’s data. But in China’s, where shipments of tablets and 2-in-1 pads hit 20 million, Apple took a 42.7% share while Huawei controlled 36.7%. Lenovo and Microsoft took around 3.8% and 3%, respectively, IDC data showed.

“Normally for the tablet market, if users are used to Apple’s iOS system, it’s not very easy for them to switch to other platforms such as Android tablets,” said Joey Yen, an analyst with IDC. “If there is a boom for the online learning and enterprise demand to work from home, for the education market, some cost-effective tablets run on Google’s chrome OS could take some shares, and for enterprise needs, Microsoft’s Surface tablets that run on Windows would be a favorable option besides iPads.”

Beijing is desperate to control the coronavirus outbreak and get the economy back on track. On March 10, China reported 24 new confirmed cases and 22 additional deaths, far less than the situation in some countries in Europe, and Iran. On Tuesday President Xi Jinping visited Wuhan, the epicenter of the coronavirus outbreak, in an apparent signal of official confidence that the worst could be over.

Beijing has asked its local governments to help the resumption of production and work and has demanded that some regions where infection risks are lower should not “review and suspend” companies’ plan to resume, while reviews in some higher-risk regions should be limited to two days, according to Xinhua.

The central government’s aggressive measures are to help China battle the slowest economic growth in several decades for 2020.

Caixin Reporter: Our 70 Days and Nights in Wuhan (In Chinese)