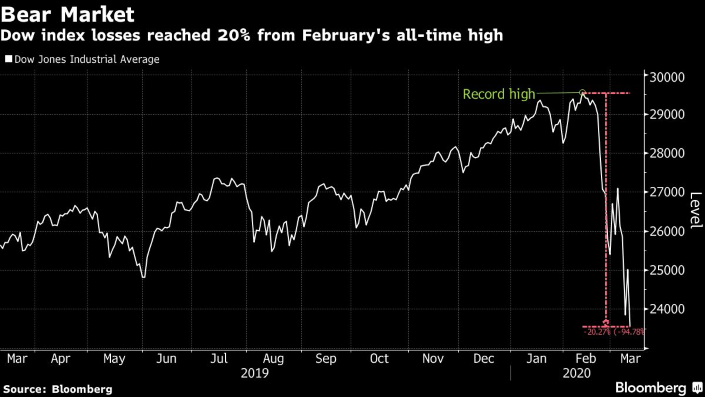 European equity futures tumbled more than 7% and Dow Jones and Nasdaq contracts slumped by the daily limit, while Hong Kong shares headed into a bear market. Investors were underwhelmed by Trump’s prime-time address where he announced a number of stimulus measures, including urging Congress to approve an undefined payroll tax relief measure, saying he is confident the U.S. will reduce the threat to people. Shares in Japan lost 5% and Australian equities extended losses to 7%, getting little respite from that nation’s stimulus package. South Korea’s won led a slide in emerging-market currencies.

Trump’s brief address on Wednesday night appeared to give little confidence to investors that the U.S. is tightening its grip on the deadly virus. The World Health Organization earlier called the virus spread a pandemic and the Dow Jones Industrial Average tipped into a bear market, ending the longest bull-run in history for U.S. shares. Oil resumed declines.

“When you constrict travel or encourage social distancing you effectively curtail a great deal of economy activity, as we’ve seen in China and we’re seeing in Italy now,” Timothy Moe, chief Asia-Pacific equity strategist at Goldman Sachs in Hong Kong, told Bloomberg TV. “If more of that comes to the U.S., which looks as though it is the case, you get near-term concerns about a downturn in the economy in the short-term.”

Signs that companies in the hardest-hit industries were drawing down credit lines to battle the effects of the virus on their businesses added to anxiety. In the latest sign the virus is curtailing consumer activity, the NBA said it's suspending the remainder of the basketball season.

“The ferocity of the sell-off reflects a massive swing in investor sentiment from complacency to panic,” said Paul O’Connor, head of multi-asset at Janus Henderson Investors. “Whereas just a few weeks ago, investors were anticipating a V-shaped recovery in global growth, they are now pricing in a high probability of a global recession.”

Meantime, investors continue to question the response of policy makers. The European Central Bank has indicated it may move as soon as this week, the Bank of England cut rates on Wednesday and German Chancellor Angela Merkel has pledged to do “whatever is necessary” to bolster the economy.

Here are the main moves in markets: