Reporter’s Notebook: I Wore a Mask to Trump’s Press Conference and Accidentally Became the Story 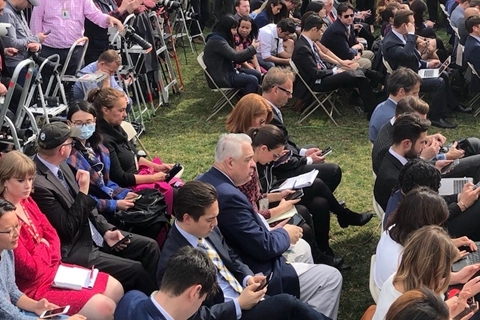 I never expected the act of wearing a mask to the White House to turn into a kind of performance art.

When U.S. President Donald Trump tweeted on Friday morning that he was going hold a press conference that afternoon, I was surprised. My first question was how many people would be there.

There were already competing claims circulating online about whether Brazilian President Jair Bolsonaro had contracted Covid-19 (he later reportedly tested negative). All we knew for sure was that a spokesman for Bolsonaro, who had recently taken a photo with Mr. Trump, had definitely tested positive.

The day before, National Institute of Allergy and Infectious Diseases Director Anthony Fauci testified before Congress that the U.S. health system was not capable of large-scale coronavirus testing. He also told CNN that whether you feel ill or well, you could be shedding virus.

If it’s impossible to distinguish between who is sick and who is healthy, how does that square with advice from the U.S. Centers for Disease Control and Prevention that only sick people should wear masks?

And so I found myself at a press conference in the White House Rose Garden, mask on, doing what I thought was the responsible thing for my own health and also the health of the people around me.

Then I became the news.

“Only sick people wear masks — you’re making me nervous,” said a reporter from a European outlet while we were queuing.

“I’m feeling fine,” I responded. “This just makes me feel safe since I don’t know who’s healthy and who's not.”

Then a photographer who gave his name as David approached and asked if he could take a picture. “Is it because I’m wearing a mask?” I asked. It was, he said.

While waiting for the press conference to begin, I saw another reporter in the same row who worked for an American TV station shooting me on his cell phone. I asked him what he was going to do with the photos, and he said he wanted to post them to Twitter.

“I just find it interesting,” he said. “You’re the first person to wear a mask at a Rose Garden press conference.”

I’ve had friends in the U.S. mocked for wearing masks before — I know it’s unusual. But I thought people in the U.S. would become more cautious as the epidemic got worse, and especially given concerns about the president's history of potential exposure to the disease.

It turned out that I was wrong. A few of my peers later admitted they had brought masks in their bags, but didn’t have the guts to put them on.

Is it a cultural difference or a scientific issue? I still don’t know. I was going to ask about it at the press conference, but nobody called on me.

Maybe it’s because I was wearing a mask.