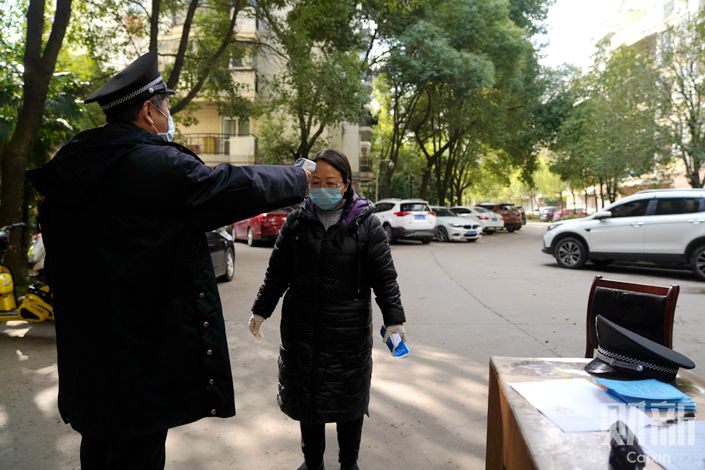 A woman in a residential community in Wuhan, Hubei province, gets her temperature taken on Thursday. Photo: Ding Gang/Caixin

(AFR) — Australian citizens and university students trapped in Wuhan, the city at the center of the coronavirus outbreak, say they now feel safer in China than they would be in Australia as the infection rates rise in their home cities of Sydney and Melbourne.

In an ironic twist to the plight of dozens of Australians who were unable to leave on Qantas evacuation flights out of the quarantined city, some who stayed behind said they were now worried about returning home.

“Before the global growth in the epidemic, my friends in Australia were very worried about me because I was at the center of the outbreak,” Melbourne photographer Moko Yong said by telephone from Wuhan, where he has been living in a hotel for almost two months.

“Now, I am worrying about my friends in Australia,” he said. “We feel quite safe in Wuhan at the moment. People going back to Australia are in a more dangerous situation than us.”

Yong said there were still around 300 Australian citizens and permanent residents in Wuhan who did not take either of the two evacuation flights out of the city last month.

They have been unable to leave because the Chinese government locked down the entire province to stop the spread of the virus. Wuhan, a city of 11 million people, was at the center of the health crisis which has killed 3,194 people and infected 81,029 in China.

Michael Hu, a 24-year-old Chinese student at a Melbourne university, has also been unable to leave Wuhan but is now worried about returning to Australia even when is allowed to leave. “I feel China is safer than Australia at the moment. My university has found one infection and I hope it will be closed soon,” he said.

“It is safer to take more preventative measures; otherwise it will put many Australians’ lives at risk,” he said. “Returning Chinese students are really worried about the situation in Australia. My parents now feel relieved that I’m staying in Wuhan with them.”

A man surnamed Yang, the father of another Chinese student, told a social media group he was worried about his son returning to Australia. “I’m worried that Australia will be a second Italy. Wuhan is the safest place in the world; it will have zero infections soon,” he wrote.

China said last week the number of new cases being reported in Wuhan had fallen to single digits. There are also signs it is preparing to lift travel restrictions and quarantine rules, which would allow the Australians there to leave.

China said last week the outbreak, which started in Wuhan and overwhelmed local hospitals, had peaked at the same time countries such as Australia, the United States and much of Europe was reporting a surge in new cases.

Yong, who arrived in Wuhan shortly before the lockdown on a photography assignment, said he would still return to Melbourne when the quarantine was lifted as he still had to pay rent there and get back to work — but he has concerns.

“I’m not optimistic with the public health situation in Australia and the government’s efficiency. It would take Australia five months to achieve what the Chinese government has done in two months,” Yong said.

He said the situation in Wuhan had improved and the local government was supplying enough food for residents.

Many of the other Australians stranded in Wuhan left on evacuation flights last month before being quarantined for two weeks on Christmas Island. Yong did not leave on the first flight because there were families and others who he said needed the seat more than he did.