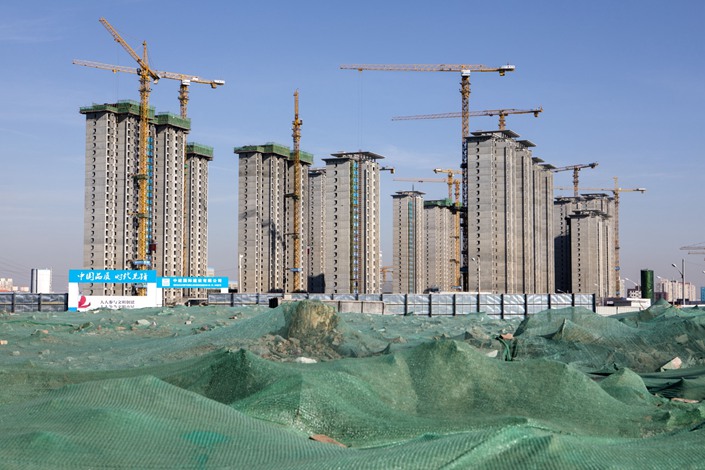 Buildings under construction in Shijingshan district in Beijing on Jan. 17, 2019. Photo: Bloomberg

(Bloomberg) — China home-price growth stalled last month and sales plunged as large swathes of the country were locked down amid the height of the coronavirus outbreak.

The coronavirus epidemic “dealt a blow” to the property market, the bureau said in a separate statement.

Home sales had the steepest plunge since at least 2013, down 35% by value in January and February from a year earlier, a separate data set showed.

Home sales slumped last month as more than 100 cities went into lockdown to contain the virus. Developers were forced to close display units to avoid gatherings of large numbers of people, and almost 50% of showrooms were still closed at the end of February, according to Citic Securities Co.

The real picture may be more lackluster than the data show. Nineteen cities, including epidemic epicenter Wuhan, had no transactions last month, so prices there were considered to be unchanged, the statistics bureau said.

“Home prices have been gaining more slowly for almost four years, and it makes cities with weaker fundamentals more vulnerable to the sudden shock,” said Xia Dan, a property analyst at Bank of Communications Co. Smaller tier-three and tier-four cities may see a decline in prices this year if there aren’t any major policy support measures, she said.

Moves to discount apartments to keep sales ticking over also helped fuel the slowdown. China Evergrande Group offered discounts of as much as 25% at many of its projects last month, and while sales surged, its average selling price declined 3%.

The question now is whether the downturn will be long-lasting, or the market will snap back quickly as the lockdowns are lifted and life returns to normal.

Property bear Larry Hu, head of China economics at Macquarie Securities Ltd., says the market was already weakening before the virus outbreak, and government support measures won’t be enough to turn it around.

Analysts at Jefferies Hong Kong Ltd. have an opposite view, saying sales will improve substantially in March and may even record year-on-year growth in April.