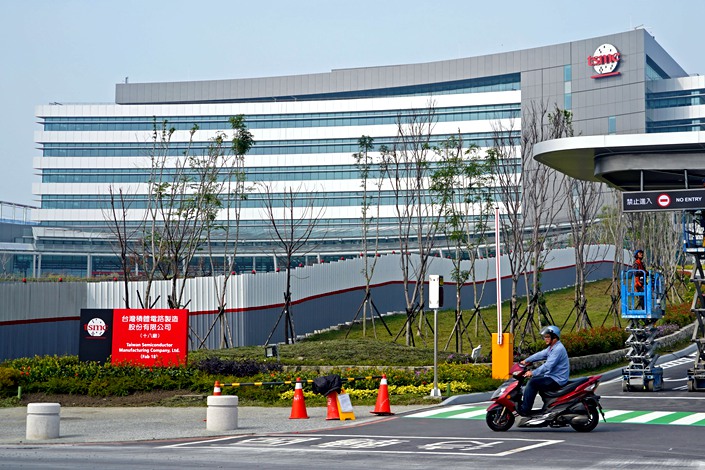 (Nikkei Asian Review) — Taiwan Semiconductor Manufacturing Co. Ltd. is stepping up its evaluation of whether to build an advanced chip facility in the U.S. in response to pressure from Washington, which wants the world’s biggest contract chipmaker to produce on American soil over security concerns.

TSMC, which makes chips for U.S. F-35 fighter jets and supplies almost all global chip developers, including Apple, Huawei, Qualcomm and Nvidia, is actively considering a U.S. plant, two sources briefed on the plan told the Nikkei Asian Review. A new plant would aim to be the world’s most cutting-edge, producing semiconductors more advanced than the 5-nanometer (nm) node chips that Apple will adopt in its latest 5G iPhones this year, they said.

The proposal shows how the Taiwan chipmaker is trying to assuage U.S. alarm over the supply chain for military-use chips. The company also faces being caught up in Washington’s hostility to China’s Huawei Technologies, a key TSMC customer that President Donald Trump’s administration views as a security threat.

Washington has stepped up pressure on TSMC before the U.S. presidential election in November, as the Nikkei Asian Review first reported in January.

A plant would be TSMC’s first in the U.S. for more than 20 years. However the proposal is still subject to change amid geopolitical uncertainty and concern over costs, which for TSMC would be much higher in the U.S. than in Taiwan.

A third person familiar with the company’s deliberations said it was “not possible” to be as profitable in the U.S. unless TSMC’s American clients and state governments helped to shoulder some of the billions of dollars that a plant would cost. TSMC’s latest 5 nm chip plant in Taiwan will cost more than $24 billion, including research and development costs.

Any U.S. plant would be on the West Coast, one person briefed on the matter said.

A West Coast plant would put TSMC closer to clients, another source familiar with the issue said, adding that “there are more suppliers and more talent compared with the East Coast.”

The U.S. has long worried about the risks of offshore production for some military-use chips. Last year the Pentagon contacted several TSMC customers, warning them about the security implications of relying on a company in democratic Taiwan, which China views as part of its territory and has not ruled out taking by force.

TSMC has also been caught in the crossfire in the U.S.-Huawei dispute. The Chinese tech company has been blacklisted by Washington over accusations that it spied for the Chinese government. Huawei denies the allegations.

Huawei relies on TSMC for the production of almost all of its advanced processor and modem chips used in its smartphones, servers and other telecom equipment. Huawei has become TSMC’s no. 2 client behind Apple, contributing more than 10% of the chipmaker’s total revenue.

The Trump administration has not given up the option of further restricting the use of American technologies by Huawei’s foreign suppliers, including TSMC. The Taiwan group still relies extensively on equipment provided by U.S. vendors.

“TSMC is facing a strategic decision of whether it wants to later focus more on the U.S. market or the Chinese market,” Su Tze-Yun, director of Taiwan’s Institute for National Defense and Security Research, told the Nikkei Asian Review. “Building an advanced chip plant [in the U.S.] could be one solution.”

“The U.S. is concerned that any of its high-security chip design blueprints could fall into Chinese hands,” Su continued. “Meanwhile, the U.S. is also concerned that TSMC’s Chinese customers could secretly help the Chinese army build chips targeting the U.S.”

A source briefed on TSMC’s plans said the chipmaker was considering producing 2-nm chips in the U.S. The smaller the nanometer size of a chip, the more advanced and expensive it is to build.

The latest generation across the chip industry will be the 5-nm chips that TSMC will put into production this year; development of 3-nm and 2-nm technology is underway. TSMC has decided to produce 3-nm chips in the southern Taiwan city of Tainan and will break ground this year on a plant expected to become operational in 2022. It is still looking for locations to produce its 2-nm chips.

“The most preferable location will definitely still be in Taiwan,” a source familiar with the matter said. “However, it’s also quite difficult to find a place for such a plant, as Taiwan is also short of land, electricity and water, as well as facing growing environmental concerns.

“It’s inevitable that TSMC has to look for overseas production, also for long-term planning purposes beyond geopolitical factors.”

TSMC’s plan, if it materializes, would mark another example of a multinational company adjusting its business strategy in the wake of geopolitical tensions. ASML, the Dutch company that is Europe’s biggest chipmaking equipment producer, last year suspended a shipment of an advanced production tool to China’s state-backed chipmaker Semiconductor Manufacturing International Co. due to U.S. pressure, Nikkei first reported.

TSMC’s only U.S. factory, in Washington state, went into operation in 1998. Most of TSMC’s chip production is in Taiwan, where the semiconductor titan has said it is more cost-effective and efficient to operate.

“The cost in Taiwan is the lowest among all regions across the world,” Mark Liu, TSMC’s chairman, said in January when asked if his company would build a plant in the U.S. “We have been studying it continuously. And that decision is made to the best interests of our customers. Yes, the geopolitical [condition] is evolving, but we still listen to our customers as the priority.”

TSMC told Nikkei on Monday that it is constantly studying and assessing whether to expand production in the U.S. “TSMC has never ruled out building or acquiring a fab [chip plant] in the United States, but currently there is no concrete plan,” spokesperson Nina Kao said. “It all depends on customers’ needs.”

TSMC also has an important presence in China, where it makes 12- and 16-nm chips at a plant in Nanjing that is considered the most advanced in China. It started mass production in 2018.

The Nanjing factory became even more strategic amid the tech battle between Washington and Beijing. Last year Huawei asked TSMC to allocate more advanced production to China, the Nikkei reported.

This story originally appeared in the Nikkei Asian Review

4
EU May Open Borders to Chinese Travelers if Beijing Reciprocates