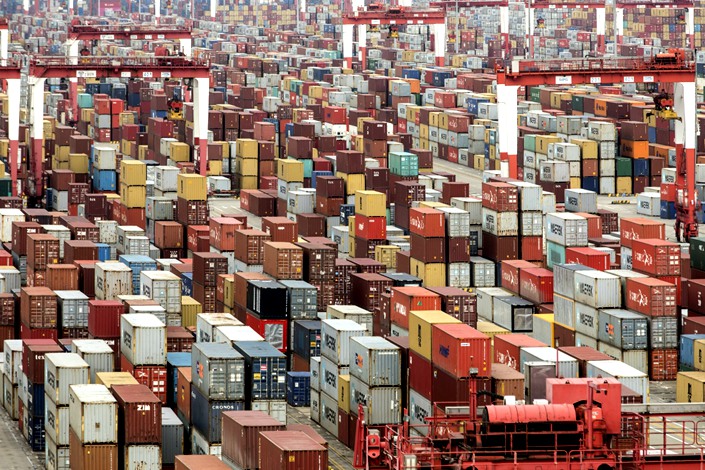 Shipping containers sit stacked next to gantry cranes at the Yangshan Deep Water Port in Shanghai on Feb. 4. Photographer: Bloomberg

(Bloomberg) — The port of Fuzhou in eastern China is restricting vessels arriving from nine countries including the U.S. and Singapore in efforts to limit the spread of coronavirus by visiting ships and their crew.

Vessels arriving from Japan, South Korea, Iran, France, Germany, Spain, Italy, the U.S., and Singapore won’t be allowed entry into the port until they’ve completed a mandatory 14-day quarantine, said people with knowledge of the terminal’s decision. The countdown begins when ships depart from those nations, said the people, asking not to be identified because they’re not authorized to speak publicly.

The mandatory quarantine will particularly hit cargoes from Asian countries that typically take a week or less to sail to China. It will also raise fears of similar steps by much bigger ports in the world’s second-biggest economy, notably the major cargo hubs of Guangzhou, Shanghai and Tianjin that serve the country’s biggest coastal populations.

Fuzhou’s measures follow similar steps taken by other countries as the virus spread. In February, Australia’s maritime safety body intensified checks on incoming foreign vessels while Kuwait prohibited all its ports from receiving foreign ships arriving from or departing to some coronavirus-hit nations, with the exception of vessels shipping hydrocarbons.

A spokesperson from Japanese shipowner Mitsui OSK Lines Ltd said the company was aware of Chinese restrictions on vessels sailing from high-risk countries with large numbers of coronavirus infections, without confirming if Japan was one of those countries.