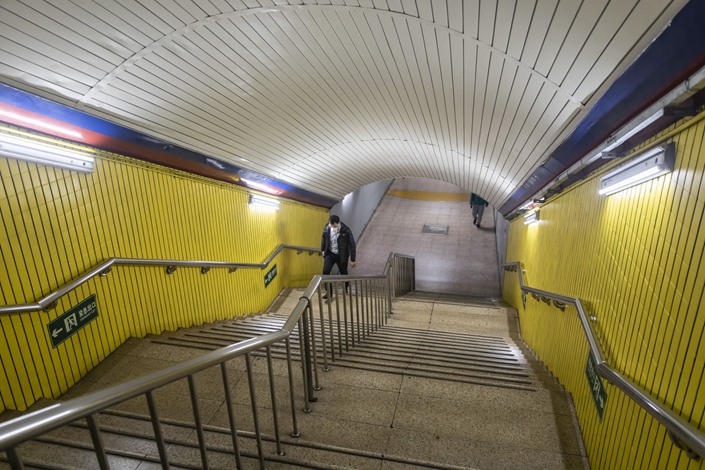 A commuter wearing a protective mask climbs a flight of steps in a subway station in Beijing. Photo: Bloomberg

The one-year loan prime rate was kept at 4.05%, according to a statement from the central bank Friday. Some analysts had predicted a cut of at least 5 basis points after the People’s Bank of China reduced the reserve-requirement ratio and added liquidity to the financial system this month. The five-year tenor was also unchanged at 4.75%.

The move in the loan prime rate — a market indicator of the price that lenders charge corporates and households for loans — was limited by the lack of a policy interest-rate cuts since February. Just this week, the central bank injected about $14 billion into the financial system via medium-term loans but kept interest rates unchanged. That’s despite data showing an across-the-board slump in manufacturing, retail sales and investment in January and February, with all the numbers hitting historic lows.

Until now the PBOC has been restrained by high inflation, said Wen Bin, a researcher at Minsheng Bank in Beijing. “An appropriate and timely cut to the benchmark deposit rate would noticeably push down the LPR. As inflation goes down and central banks of major economies are returning to QE, the policy room for China has widened.”

The weakness in activity prompted at least 12 banks to start forecasting a contraction in the current three-month period. The economy will grow 3.4% this year, according to a Bloomberg survey. That would be the slowest pace since a contraction in 1976 — the final year of the Cultural Revolution that wrecked the economy and society.

The LPR has been considered China’s de facto benchmark funding cost since a reform last year. The rate decided by a group of 18 banks is released on the 20th of every month and is reported in the form of a spread over the interest rate of the central bank’s medium-term loans. The steady decline in the LPR since August last year has led to lower borrowing costs in the wider economy. The rate was reduced by 10 basis points in February.

Chinese bank margins are already being squeezed by government efforts to combat the economic impact of the virus outbreak, which include lending to some firms at preferential rates. That’s made loans increasingly less profitable.

At the same time, the loan prime rate also reflects the PBOC’s policy stance as it is linked to the medium-term lending rate. The Chinese central bank has been markedly more restrained than global peers in recent days. More than 30 central banks have eased policy in response to the spreading coronavirus crisis.

“They may be trying to send the message China doesn’t need to follow the global easing deluge,” said Stephen Chiu, an Asia currency and rates strategist at Bloomberg Intelligence. “But even so, more easing should still come in the form of further broad-based or targeted reserve ratio cut in the second quarter.”