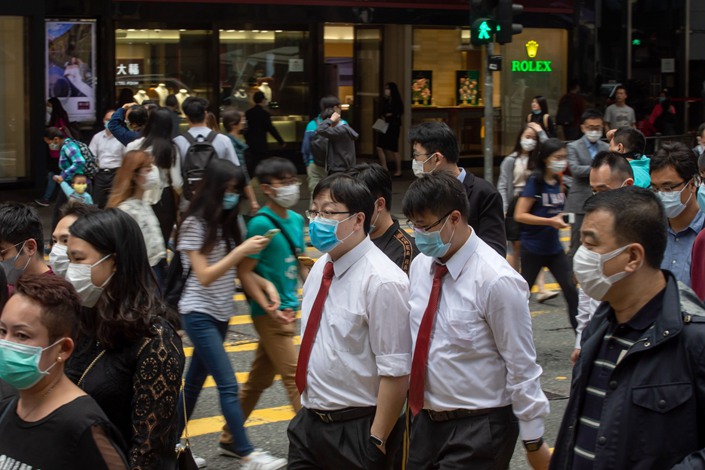 (Bloomberg) — Simon Kavanagh never thought he’d be so happy to go to work. The investment banker rode the elevator to the 20th floor of his office on Queen’s Road Central in Hong Kong recently after spending a couple of weeks cooped up in his apartment as the coronavirus raged across Asia.

Working from home is nice for a few days, “but for week-long periods when you live in very small Hong Kong apartments it quickly loses its novelty,” said Kavanagh, a managing director at BDA Partners. “Returning to the office indicated a return to normalcy.”

Kavanagh is among a growing cadre of bankers and other office workers slowly returning to work in Hong Kong and across greater China following a stretch when new virus cases slowed. While most offices aren’t 100% staffed — some are still rotating at home — the gradual return to normal offers some comfort for workers in Europe and North America who are just starting to see their lives turned upside down by the virus.

Signs of the return are everywhere. Kavanagh’s BDA team in Shanghai was back at work last week. Traffic jams are becoming the norm again in China’s financial capital. In Hong Kong, hot lunch spots in the financial center like Simply Life are sporting line-ups. Most bank branches in Beijing have reopened. Singapore, the Southeast Asian financial hub, has barely missed a beat.

“We are about 3 to 4 weeks ahead of where the U.S. is in terms of dealing with the outbreak,” Chris Brankin, chief executive officer of TD Ameritrade Asia, told Bloomberg Television on March 12. “People are coming back to the office, they are out and about in public, whereas the U.S. and Europe are in scramble mode.”

Back at work doesn’t mean back to normal for most bankers, and a recent uptick in cases in Hong Kong and Singapore has authorities cautioning against complacency. While some deals and equity sales are starting to get done, travel restrictions and the surge in cases throughout Europe and the U.S. are putting major transactions on hold. Announced deals involving Chinese and Hong Kong companies plunged by almost a third in the first quarter to $65 billion. Initial public offerings in Hong Kong however have picked up in March after a plunge in February, according to data compiled by Bloomberg.

“Business has slowed down, but we’re still closing deals, including one in China just now, and we have a few more to close in the coming weeks,” said Kavanagh, whose firm has offices across Asia.

While New York and Los Angeles have shut down most bars and limited restaurants to take-out, Hong Kong eateries are filling up again. On a recent evening, four different restaurants including Birdie and Casa Lisboa in the Lan Kwai Fong area of the finance district had no tables available.

Lan Kwai Fong is “thriving again,” said an investment banker named Larry who works for a European firm and didn’t want his last name used. He said the Dragon-I nightclub, not far from the offices of UBS Group AG and JPMorgan Chase & Co., was packed on the weekend. His whole team is back at work though business has been slow, leaving more time to hit the gym, and Lan Kwai Fong.

Most bank branches are operating. HSBC Holdings Plc opened nine outlets last Monday after they were closed as a precautionary measure. BOC Hong Kong Holdings Ltd., which has the biggest branch network in Hong Kong, has more than 140 branches open, though it closed an additional 16 on Monday given the recent spike in cases. In all, about 80% of the city’s bank branches were open, the Hong Kong Monetary Authority said on March 13.

While bankers are slowly getting back to the office, many are now subject to new marching orders from their global parents. JPMorgan recently ordered all staff to split their time between home and office. Macquarie Group Ltd., the Australian bank, asked all global staff to work from home.

One JPMorgan banker in Hong Kong said he joined five conference calls the other day: not one was about a deal, they were all about internal protocol and coping in the coronavirus era.

In an example of how the virus fallout has turned on its head, one senior investment banker at a European firm who sent his kids to Madrid when the Hong Kong schools closed in January, is now bringing them back to Hong Kong.

The lines are forming again at the Tim Hortons coffee shop and the Shake Shack burger joint in Shanghai’s Lujiazui financial district, where global banks including Citigroup Inc. and HSBC have offices. Traffic jams have returned to China’s financial hub of 24 million people and 1,700 finance firms. Line 2 of the metro, one of the busiest in Shanghai, was packed last week, with commuters lining up to transfer to Lujiazui station. Overall, China Inc. is ramping up, with industry running at about 70% to 80% of capacity, according to an analysis by Bloomberg.

Business is “more or less” back to normal in Hong Kong and Shanghai as most people are in the office, said a money manager named Liu who works for a Chinese firm and recently returned to Hong Kong from Shanghai.

Lanny Li, a debt banker at one of the largest brokerages in China, said a travel ban at his firm was lifted in early March, allowing him to visit clients that are in need of financing. His firm is now issuing about 30 bonds a week.

In a small sign of the acceleration, Li noticed that after he left a recent meeting with a finance executive in Chengdu, Sichuan province, there were 10 other people outside the office waiting for meetings.

The capital city is also showing signs of life, albeit at a slower pace than Shanghai. The Forbidden City remains forbidden — the former Imperial Palace has been closed since January. The Great Wall is also off limits and restaurants cap seating at two per table. Yet, dealmakers at UBS and elsewhere who are preparing for China’s further opening of its capital markets on April 1 are increasingly back in the office. Chinese banks are generally more fully staffed in offices than foreign firms.

As of mid-March, more than 92% of the city’s office buildings had reopened, with about 38% of people back to work, according to the official Beijing Daily.

For Kavanagh, the Hong Kong investment banker who lived through the SARS outbreak in 2003, the gradual return to normal offers some solace for younger colleagues or those in London and New York wondering if this crisis will ever end.

“Some of us still remember SARS, so the coronavirus is a bit of a flashback, whereas for the more junior people it is something new,” he said. “We just tell them to stay calm, be cautious and hang in there as this too shall pass.”