China’s Beer King to Quit Making Brew for the Masses 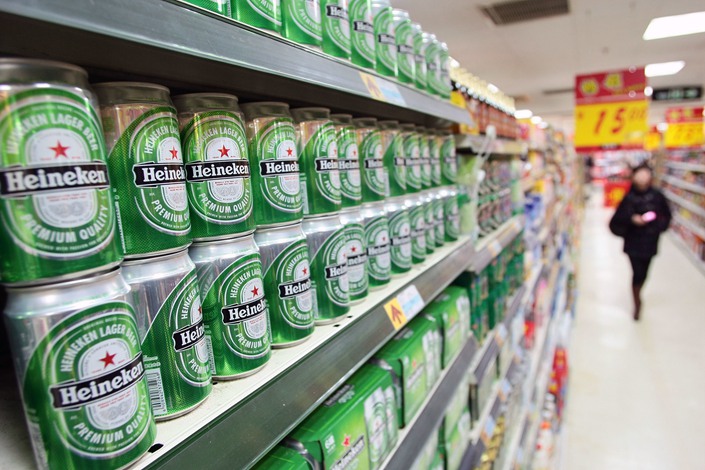 Heineken beer on sale at a supermarket in Shanghai.Photo: IC Photo

The brewer will shut down three to five plants every year over the next five years, CEO Hou Xiaohai said in an earnings call for the year ended in December.

The company acquired the Chinese operations of Dutch brewer Heineken NV, the world’s No. 2 player, in April. Of the three sites making Heineken in China, the facility in Zhejiang province will have its annual output capacity increased by 50% to 300,000 kiloliters at a cost of 300 million yuan ($40 million) in 2021. And a new Heineken product is slated to be released around the end of April.

China Resources Beer’s popular Snow beer sells online for 4 yuan to 5 yuan per can, compared to 10 yuan for a Heineken.

China Resources Beer will continue to close breweries making low-end products. The group now has 74 plants, 24 fewer than at the end of 2016, with its annual production capacity down 7% to 20.5 million kiloliters. But it still has excess capacity amid a decline in demand in China, with annual sales totaling about 11.4 million kiloliters.

Demand for beer at restaurants has dropped sharply due to the novel coronavirus. China Resources Beer’s sales in January and February fell 26% on the year, but recently the number of new infections in China has been declining.

“If the current situation continues, restaurants will likely resume business in April and can be expected to return to normal by May,” Hou said.

Beer sales in China fell about 10% from 2013 to 45.49 million kiloliters in 2018, according to Euromonitor, as young people drink less beer and consumers increasingly enjoy other types of alcoholic drinks such as wine. Meanwhile, the popularity of premium beer has led to higher unit prices, with beer sales up about 37% to roughly $93 billion in value terms.