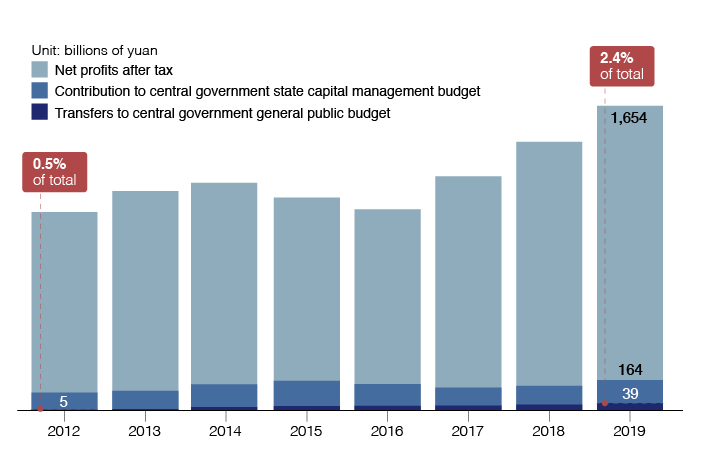 Despite Beijing’s recent signal that it is ready to launch a larger-scale fiscal stimulus to help battle the economic fallout from the coronavirus pandemic, its fiscal space is tight.

For the Chinese government to control its growing deficit — estimated by the International Monetary Fund to be 9% of GDP in 2019, including both on-budget fiscal deficit and off-budget spending — it has to find a way to collect more nontax revenue. One rightful way to do so is to make its state-owned enterprises (SOEs) pay their fair share.

In 2019, only 2.4% of the after-tax profits of the central SOEs — those under the direct control of Beijing—in the nonfinancial sector went into China's central general public budget used to fund social programs.

If 30% had been turned over, as was the goal set by the Chinese leaders in 2013, at least another 450 billion yuan ($63.5 billion) would have been added to the general public budget. This would have eased the government’s fiscal constraints greatly. China therefore must ramp up its long overdue campaign of raising more dividends paid by its SOEs.

In 2007 the State Council introduced a dividend policy for state firms directing them to turn over SOE dividends, but only a modest increase took place.

Prior to that order, most state firms had historically paid little to no dividends to the government entities that owned them, even though the 1994 taxation reform outlined the dividend rates for such payments. While some publicly-listed SOEs did pay out a share of their earnings in dividends, they did not go to the Chinese government.

Dividend payments differ between nonfinancial and financial firms. Nonfinancial firm payments go to a separate state capital management budget and are partially transferred to the general public budget later. These payments have been surprisingly small.

From 2012 to 2019, these nonfinancial central state firms made an impressive after-tax net profit of 1.27 trillion yuan annually, or 1.7% of China’s GDP. But only 11% of this profit supported the state capital management budget. Of that amount, only 16% was transferred to the central general public budget. This means that only 1.7% of the after-tax profits of nonfinancial central SOEs actually went into the Chinese government’s main public budget during this period.

The State-owned Assets Supervision and Administration Commission, or SASAC, which manages most nonfinancial SOEs controlled by the central government, opposes these transfers, insisting instead that they be used for the SOEs themselves.

On the other hand, dividends by state-owned financial institutions do not have to go through a cumbersome budget transfer and have been able to contribute more money to the central general public budget.

Thanks to the huge increase in the dividends paid by the state financial institutions in 2019, the contribution made by the whole state sector under the central government exceeded 800 billion yuan, more than double that of 2018, but it was still under 10% as a share of the central general public budget.

Premier Li Keqiang of China in his 2019 Government Work Report said these payments “should be increased.” The mounting pressures of the economic fallout from the Covid-19 pandemic could make that happen.

Tianlei Huang is a research analyst at the Washington-based Peterson Institute for International Economics. The article was first published on the think tank’s website.