Blog: As a Foreigner In Beijing, I Never Felt So Unwelcome Before 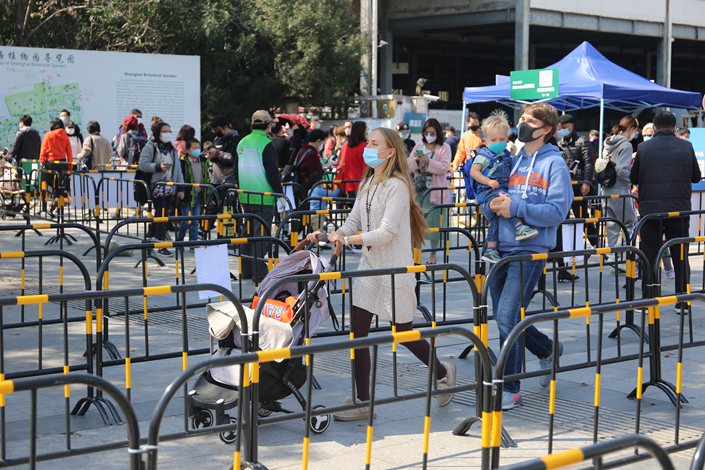 The soothing warm but at the same time cool weather; the yellow, white, pale pink buds beginning to bloom. Spring has arrived in Beijing. After a heavy winter lockdown due to the outbreak, the arrival of spring has brought a whole new level of appreciation.

As Beijing gradually reopens, cars start bustling through the avenues, scooters start zigzagging through the streets, people start feeling confident and safe to be outdoors. Nonetheless, the guard is not let down. Precaution hygiene reminders are everywhere you go — on the elevator, on the subway, on billboards and on signs in the park. Nowadays, the mask has become another extension of ourselves.

We decided to visit the Beijing Botanical Garden, it was the first time I had seen so many people gather around in the same area after several weeks of lockdown and strict preventive measures. Despite the amount of people, everyone was very cautious and there were still many areas restricted in order to prevent large clusters of people.

Although the park’s skyline was mostly naked branches since the cherry blossoms have yet to fully bloom, taking a break from the concrete urban lifestyle, surrounding ourselves with nature’s simplicity and filling our lungs with fresh air was worth the trip.

When you are an expat living in China, it’s normal for people to sometimes stare at you out of pure curiosity because you are a foreigner. From my experience, in big cities like Beijing, it does not happen as often. But in other provinces it can be highly visible since it may be the first time they’ve ever seen a foreigner in person. As we strolled through the park, we noticed gradual stares. However, this time we noticed something different — stares where curiosity was not the underlying cause but instead worrisome rejection, people stepping further away from us and a security staff following our every move.

The most shocking incident was when a grandma grasped her granddaughter and said, “Don’t go near them.” I had never felt so unwelcome like I did in that precise moment.

I have been living in Beijing for almost two years. Despite the language barrier at first, I have always felt welcome. I have always been fascinated and eager to learn about Chinese culture and traditions. Beijing had become my home. At that moment, I felt like I was perceived as a threat, when actually I had been there throughout the entire time since the epidemic started in China.

During the peak of the outbreak, the strength and perseverance of the Chinese people had helped me cope with the anxiety inside of me. I gained a whole new level of admiration towards Chinese society. I felt proud living in China and being able to witness the historic efforts to contain the virus through the contribution and solidarity of every single citizen. However, that day I felt rejected.

Talking to other foreigner friends, we realized we have all been experiencing similar situations the past few days: people refusing to go on the same elevator even if it’s empty; hearing phrases such as “foreigner stay away”; and denied entry to certain places. These dismissing attitudes to foreigners are becoming more and more visible all over China.

The number of rising cases abroad and growing number of “imported cases” in China have been triggering a new type of stigma within the country. At the same time, we continue to see the dreadful constant physical and verbal attacks on people of Chinese or East Asian descendant living abroad. The coronavirus racism can be even more threatening than the outbreak itself.

Social media plays a key role in shaping people’s views. It provides a space where people can interact and express themselves. It can also be a dangerous tool to spread rumors, trigger panic and fuel discrimination. The pace of spreading misinformation and stigma can be as fast as how the virus moves from person to person.

One of the main issues that must be addressed to prevent discrimination is communicating facts in order to understand the virus and its effects. The virus does not have a face; it does not have a nationality or ethnicity. It has no borders. On the other hand, we have also witnessed that solidarity can defeat the limits of borders, culture and languages. By far, the most positive outcomes of the pandemic outbreak have been the “global chain of human solidarity,” as mentioned by the UN Secretary General. We must join forces as humanity, gain strength from each other.

We should fight the common enemy (the virus) not as an individual country or nationality, but rather by coming together as humanity to defeat the pandemic.

Maria Paz Osella is an intern at the UNAIDS China Office. She was studying Chinese and working toward a postgraduate diploma in Advocacy in International Affairs from the Geneva Graduate Institute.

Caixin Global publishes a diverse range of opinions as letters to the editor on our blog. We'd like to hear what you are thinking or experiencing around the globe. Please submit your thoughts in publishable format to our email: blogen@caixin.com.