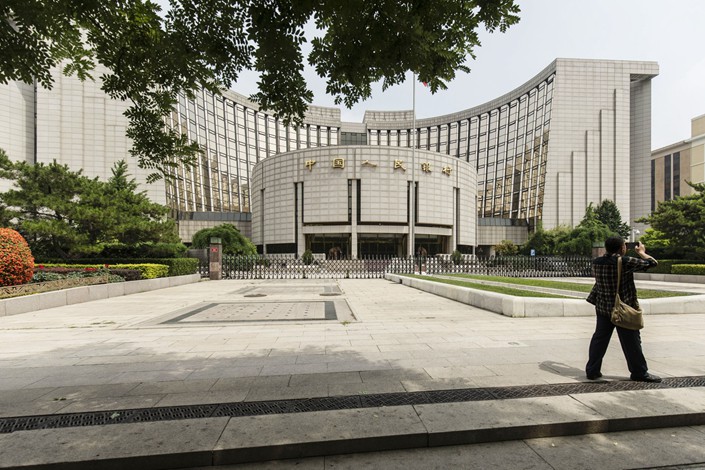 A pedestrian takes a photograph in front the People's Bank of China headquarters in Beijing on June 7, 2019. Photo: Bloomberg

(Bloomberg) — China’s central bank injected medium-term funding into the financial system Wednesday and cut the cost of the funds as expected, bolstering measures aimed at countering the economic fallout from the coronavirus pandemic.

The People’s Bank of China offered 100 billion yuan ($14 billion) via the one-year medium-term lending facility, cutting the rate to 2.95% from 3.15%. The reduction was expected as the central bank already cut the rate on 7-day market operations in late March and the different interest rates tend to move together.

The cut to the interest rate was widely expected by markets as it’s a “follow-up reduction” after the PBOC lowered the 7-day reverse repurchase rate in March, said Liu Peiqian, a China economist at Natwest Markets in Singapore. “The move shows the central bank is rather neutral and it doesn’t plan to flood the market.”

She added if the PBOC were to withdraw MLF liquidity on Friday, that “might impact market sentiment as the news would come out along with the GDP data, which won’t be good-looking.”

China’s central bank cut the interest rate of its short-term funding by 20 basis points on March 30th, a move described by monetary policy adviser Ma Jun as a signal of increasing counter-cyclical easing. First-quarter gross domestic product data will be released Friday along with other economic data, and is expected to be the worst result in decades.

China’s 10-year government bond futures pared gains to as little as 0.04% after the announcement, but the advance quickly returned to 0.2%. The onshore yuan remained slightly weaker for the session, trading around 7.0540 per dollar at 11:34 a.m., while stock indexes were little changed.

The operation can help guide next week’s loan prime rate fixing lower and counters the bad GDP numbers due Friday, said Tommy Xie, an economist at Oversea Chinese Banking Corp in Singapore. Conducting the rate cut and reserve ratio cut on the same day signals “the PBOC is more flexible to support the economy,” he said.

The MLF announcement follows the central bank’s surprise announcement earlier this month that it will cut the interest rate it pays on banks’ excess reserves and reduce the amount of cash that selected lenders need to hold.

The two-step reduction will in total free up about 400 billion yuan of liquidity in the financial system including that released Wednesday. Another reserve ratio cut is due in mid May and will release 200 billion yuan.

The PBOC didn’t inject liquidity with short-term reverse repurchase agreements Wednesday, the 10th straight day it has refrained from doing so.