Opinion: Luckin Will Cast Doubt on Chinese IPOs in America 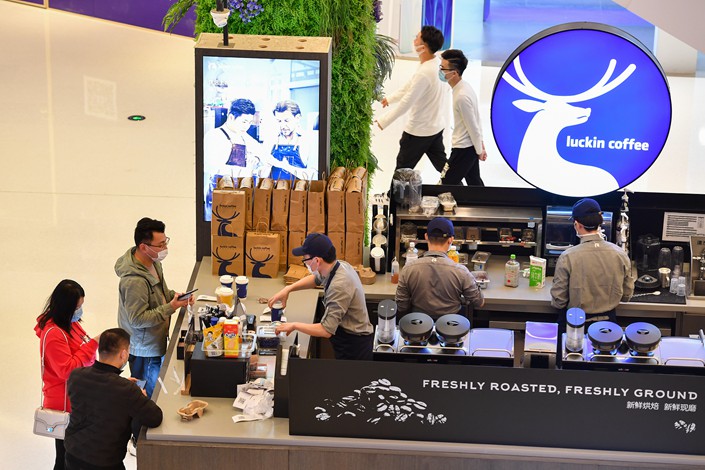 Customers wait at a Luckin Coffee store on April 3.

Luckin Coffee Inc.’s debacle over fictitious sales and subsequent collapse in its stock price comes at a most inopportune time given the coronavirus-induced slowdown in China’s economy, and its effects will reverberate far beyond the company to other Chinese firms with dreams of listing their shares on a U.S. stock exchange. Add to the mix Washington’s penchant for zealously scrutinizing every aspect of the Sino–American relationship coupled with previous calls for limiting capital market access, and it creates an environment where it may soon become prohibitively restrictive for Chinese firms to conduct IPOs in America.

Touted as China’s answer to Starbucks, Luckin relies on an appealing blend of a user-friendly app, cutthroat pricing, ubiquitous locations, and convenient pick up service. This corporate recipe allowed it to grow to over 4,000 stores since first opening its doors in 2017 — a hyper-fast growth rate, symbolic of a nation where the word “fast” takes on a different meaning, seen nowhere else in the world. This is no easy feat in a nation of tea connoisseurs that is just discovering coffee, where the average consumer drinks about of five cups a year, compared to 500 in the U.S. and 1,000 in Europe.

The speed of light, grow-at-all-costs business model has been adopted by countless startups all over the country, where winning market share from an incumbent business, whether Chinese or foreign, is a primary goal in an attempt to trounce larger rivals at their own game. But this strategy, fraught with amped up head-scratching forecasts, comes with inherent limitations and (at least for the purposes of an IPO in the U.S.) may be cast off as unworkable at best and false-hearted at worst.

Luckin’s meltdown has unnerved investors and will have serious implications for the next wave of Chinese IPOs in America.

For starters, expect firms to encounter lengthened timeframes to list and come under closer examination when they file their F1 form with the Securities and Exchange Commission (SEC). As part of the due diligence process, external auditors reviewing a company’s financial statements will be expected to ask much tougher questions covering footnotes, disclosures, risks faced and the effectiveness of controls that mitigate those risks.

Additional actions by Washington may include a full review of all Chinese firms listed on U.S. bourses, and delisting companies with suspect financials and questionable business models that are repeatedly unable to turn a profit. More extreme measures may include temporarily barring Chinese firms from listing in the United States.

Seemingly lost in the discussion is that Luckin relied on a group of top-notch advisors — Ernst & Young as auditor, Morgan Stanley and Credit Suisse as bankers, and Davis Polk as legal counsel — that brings into question the effectiveness of the larger infrastructure currently in place to bring Chinese firms to market and whether investors can take reasonable assurance in the work performed by these and other companies. In Beijing, the Chinese Securities and Regulatory Commission will begin a formal investigation and that may include questioning two local investment banks involved in the deal — CICC (China International Capital Corp) and Haitong Securities International.

Earlier this year, I argued that Chinese companies who want to list in America should proceed cautiously amidst heightened scrutiny by lawmakers and regulators. The Luckin scandal has now cast a pall over the entire IPO process and may set off an indiscriminate dragnet that ensnares all future Chinese listings, including many that are legitimate businesses with viable and sustainable business models. This regrettable episode will serve as bait for China hawks just aching to pass additional anti-China resolutions. “A continuing theme from Washington will be that you can’t trust what they say or numbers they put out,” according to Peter B. Walker, senior partner emeritus at McKinsey.

So, what options do Chinese firms have? First, assuming the response from Washington is measured and not extreme, the result will be tougher reviews while not barring capital market access. IPO candidates will have no choice but to comply with lengthier due diligence requests and probing examinations from the entire chain of actors — auditors, bankers, consultants, exchanges, lawyers, regulators and other interested parties.

If this becomes too onerous, Chinese firms can turn to traditional bourses in their home market in Shanghai, Shenzhen and Hong Kong, and the newly launched STAR market. But this option presents other challenges. In particular, stock markets in Greater China have stricter requirements for profitability (compared to laxer rules on the Nasdaq) and limits on price-to-earnings ratios.

A third option is for Chinese firms to consider other international bourses such as the London AIM or Nordic exchanges, who may not toughen regulatory assessments of foreign companies, if only tacitly acknowledging that they will pay closer attention. Lastly, if all else fails, firms can stay private longer, refine their business models, boost their top and bottom lines and delay listing until they reach a level of corporate sophistication and business model maturity that would permit a successful IPO.

The Luckin Coffee case may turn out to be a seminal event in that cross-border finance — one of the last few spheres spared from spillover effects of the trade war — may now become a front and center concern for lawmakers. While a review of foreign listings in America might be required, politicizing capital market access would be a mistake and using it as a bargaining chip to extract concessions from the other side would be a miscalculation.