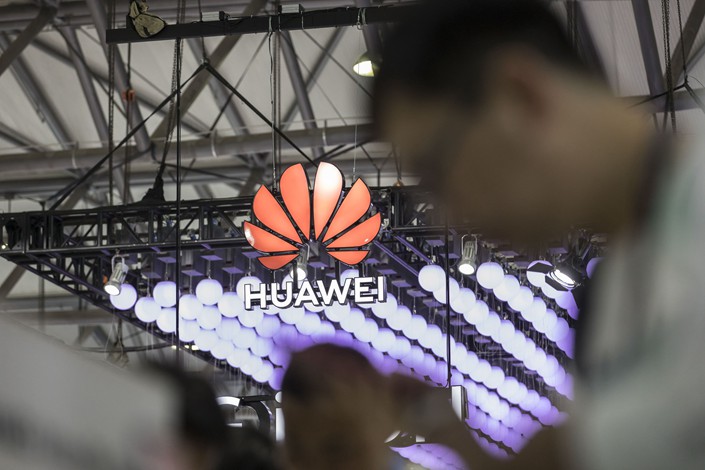 Signage is displayed at the Huawei Technologies Co. booth at the MWC Shanghai exhibition in Shanghai on June 27, 2019. Photographer: Bloomberg

(Bloomberg) — Huawei Technologies Co. Ltd. is emerging as the runaway winner in China’s $170 billion effort to build out its fifth-generation wireless networks, part of a concerted effort by Beijing to seize the lead in a key technology from the U.S. while rebooting a virus-stricken economy.

Since the beginning of the year, Huawei has secured 28.4 billion yuan ($4 billion) worth of 5G equipment orders from the country’s largest carrier, China Mobile Ltd., beating out competitors like Ericsson AB and ZTE Corp. to win more than half of the 5G contracts awarded by the operator during the period, according to an analysis of procurement data by Bloomberg News.

Huawei is relying on its home market more than ever, at a time its growth has all but evaporated. The 5G contract haul shows Huawei is benefiting from the domestic market and building its telecommunications expertise despite the Trump administration’s blacklisting last year. Beijing has forcefully defended Huawei, and the country’s three wireless operators — all state-backed — have added support through network contracts.

While China has spent years striving for leadership in 5G, the effort took on greater urgency after the coronavirus led to the nation’s first economic contraction in decades. In a meeting with senior officials in March, Chinese President Xi Jinping singled out the technology’s importance for rebooting the economy. Weeks later, the country’s telecom regulator said China will “make every effort” to hasten the expansion of 5G coverage.

“The focus on buildouts, handsets, and other metrics misses the fact that 5G will be a platform where innovative Chinese companies such as Alibaba, Tencent, Baidu, and a host of new tech unicorns will be able to build new applications and use cases,” said Paul Triolo, head of global technology policy at Eurasia Group. “Beijing wants Chinese companies to lead in this race to innovate on top of 5G.”

China is entrusting Huawei to galvanize 5G tech, a cornerstone of a national “new infrastructure” blueprint that covers nascent technologies from the Internet of Things and autonomous driving to surveillance and factory automation. An early and successful rollout could help solidify Huawei’s position as a world leader in 5G.

More deals are on the horizon. China has earmarked 1.2 trillion yuan to build 5G networks in the next five years, directly creating more than 3 million jobs in related sectors, according to the China Academy of Information and Communications Technology, a government think tank. IDC telecom analyst Cui Kai said 5G investment will continue to climb and peak in 2022 or 2023.

This year, China’s three state-owned telecom carriers will spend a total of 180 billion yuan on 5G-related projects, including base stations and smartphones. China Telecom and China Unicom still have to announce bidding results.

The 5G contracts give Huawei a much-needed boost as some projects in Europe grind to a halt because of Covid-19. Huawei this week reported revenue growth slowed to 1.4% in the first three months — down from 19% over all of 2019 — following pressure from the U.S. and dampening demand brought about by the outbreak.

The Shenzhen-based company clinched deals to build more than 132,000 base stations for China Mobile across the country worth 21.4 billion yuan. The telecom carrier awarded rival ZTE Corp. 5G base station contracts worth 10 billion yuan, while Ericsson’s haul was around half of that. Nokia Oyj, which runs its China business via a joint venture with a local partner, didn’t get any of the business.

Huawei won 56% of total orders by China Mobile for slicing packet network construction, or SPN, responsible for 5G data transmission between base stations and the core network. This brought in another 5.6 billion yuan in revenue.

Huawei and ZTE also split 5G data management orders worth 1 billion yuan, leaving a fraction of the order to Ericsson, according to two separate procurement documents from China Mobile.

In addition to 5G infrastructure, China Mobile placed orders with Huawei’s consumer electronics unit from the beginning of the year, including for about 70,000 units of the latest 5G smartphones and 140,000 5G portable Wi-Fi devices, without providing the procurement price. Most 5G phones in China cost around 4,000 yuan retail but carriers usually buy popular smartphone models from vendors at a discount.

China Mobile had 31.7 million 5G package subscriptions nationwide as of March, more than doubling the subscription number in February, according to its website. 5G smartphone sales are expected to increase as more telecom carrier branches around the country place orders. Not all will be Huawei sales. So far this year, the carriers purchased more than 130,000 units of 5G smartphones from rivals Oppo and Vivo, the data show.

Huawei’s 5G boost has benefited its suppliers. Shares of printed circuits board maker Shennan Circuits Co. Ltd. jumped more than 60% since the beginning of the year. Wuhan Fingu Electronic, a maker of radio frequency components used in base stations, increased by about 25%.

Still, some doubt that 5G will be the savior that China is seeking. Gavekal Dragonomics analyst Dan Wang said that 5G doesn’t look like a big factor in moving the economy. “It’s a build-first-and-ask-questions later approach led by the state,” he said. “There’s not yet a killer app.”

Huawei has put up a fierce fight since Washington banned the Chinese company from getting key American technologies last year. In the latest development, the Trump administration was said to consider imposing restrictions on the sale of semiconductors to Huawei by chipmakers such as Taiwan Semiconductor Manufacturing Co. and Samsung Electronics Co., a move that would effectively deprive the Chinese giant of using the most advanced chips.

“There’s no question that China’s state-owned telecom operators can direct a lot of business to Huawei,” said Wang. “The company’s problem, however, is on the supply side. Escalating U.S. sanctions might be highly disruptive.”