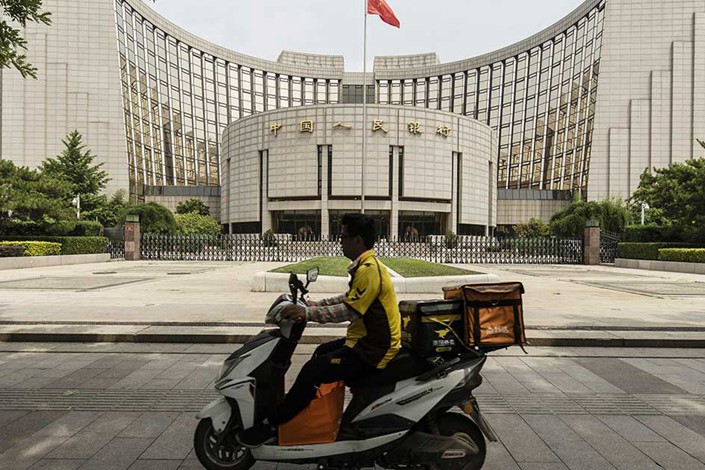 A motorist rides past the People's Bank of China headquarters in Beijing on June 7, 2019. Photo: Bloomberg

(Bloomberg) — China’s central bank rolled over some of the targeted funds due Friday while cutting interest rates on the loans, the latest in a string of measures aimed at ensuring sufficient liquidity.

The People’s Bank of China injected 56.1 billion yuan ($7.9 billion) into the banking system via the targeted medium-term facility, just as 267.4 billion yuan of the debt comes due. The one-year funding was offered at an interest rate of 2.95%, lowered from the 3.15% of the last operation in January. Analysts had expected a cut after the central bank lowered rates on some of its other policy tools to all-time lows.

It skipped offering short-term funding via open market operations for a 17th consecutive day, according to a statement. The yield on 10-year government bonds extended declines to 2.46% after the announcement, the lowest level since 2002. Futures of the same tenor gained 0.32% as of 10:18 a.m. in Shanghai.

A flurry of measures in recent months have kept liquidity ample to support China’s weakened economy, with data last week showing the first contraction in decades in the first quarter. Friday’s rate cut puts the TMLF back in line with other monetary tools, part of policymakers’ wide-ranging response to cushion the economy and bolster investor confidence. Lockdowns to contain the coronavirus are set to result in the country’s slowest annual economic growth since the 1970s.

“The size of the offering shrunk quite a bit,” said Becky Liu, head of China macro strategy at Standard Chartered Bank Ltd. in Hong Kong. “That suggests that the TMLF facility is no longer very attractive to banks, given the availability of alternative funding channels including the relending and rediscounting channels.”

Created in 2019, the TMLF has been used by the central bank to channel liquidity to specific parts of the economy while avoiding a flood of money in the interbank markets. That mindset, however, has changed drastically since the virus outbreak called for much-broader monetary easing.

The PBOC’s relending and rediscounting tools are “more attractive to many of the small banks” now as they offer funding at cheaper levels than the TMLF has, according to Xing Zhaopeng, a market economist at ANZ Bank China Co. in Shanghai.