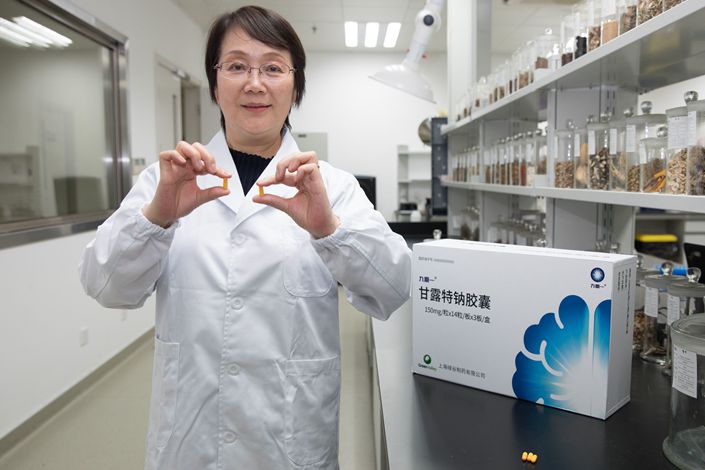 Geng Meiyu, key inventor of the drug GV-971, also a researcher of Shanghai Institute of Materia Medica under Chinese Academy of Sciences, shows the sample model of the new drug in Shanghai on Nov. 3. Photo: Bloomberg

(Bloomberg) — A Chinese drugmaker has received approval from the Food and Drug Administration to start clinical trials in the U.S. for a breakthrough Alzheimer’s drug as it seeks global validation for the controversial therapy.

Shanghai Green Valley Pharmaceutical Co. got clearance on April 8 for the U.S. part of a global trial that seeks to enroll more than 2,000 patients with mild-to-moderate Alzheimer’s across North America, Europe and Asia, according to a company statement Sunday.

The drugmaker, which didn’t disclose the size of U.S. trials and still needs permission from other countries, aims to file for FDA approval to sell the drug by 2025 after the trial concludes. The start of the U.S. trial may be delayed by the coronavirus pandemic but will not impact its long-term timeline, said Li Jinhe, the company’s vice president of global operations.

FDA’s move to let Green Valley go straight to late-stage large-scale trials is a boost to its bid for global legitimacy after the experimental drug oligomannate received conditional approval in China late last year. It’s the first new medicine for the incurable neuro-degenerative disorder in nearly 17 years but there’s been skepticism from researchers over its unusual approach and efficacy.

Global drugmakers have invested billions of dollars in over 190 experimental drugs to treat Alzheimer’s, which affects 10 million people in China and 5.8 million in the U.S., with little to show for it.

Green Valley is “cautiously optimistic” about the clinical tests and the U.S. approval is just the first step in the global multi-center Phase III trials, Li said in a statement. “It won’t be a success until the drug gets approved.”

The trial will be conducted for a year during which neither investigators nor patients will know who’s been given the medicine and who’s on placebo to avoid bias when interpreting results. This will be followed by six months of open study when all the patients will receive the drug.

Researchers estimate there are 50 million people worldwide living with dementia, with Alzheimer’s the cause in as many as 70% of cases. Drugs that halt the debilitating disease could be a market worth as much as $30 billion in the U.S. alone, according to an estimate by analysts at Sanford C. Bernstein & Co.

The FDA has allowed the Chinese drugmaker to skip earlier phases, where the drug is studied on smaller groups of patients, and go straight into the large-scale phase III trials that precedes filing for regulatory approval. The go-ahead highlights the urgent need for an Alzheimer’s treatment, as well as the American regulator’s comfort with data recorded from clinical trials in China.

Oligomannate’s unusual method of slowing down Alzheimer’s has been controversial as it still lacks sufficient evidence in human studies. The drug aims to readjust the microbiome in the gut, which Green Valley says ultimately leads to reduced neuron inflammation in the brain, thus slowing the progression of the disease.

The approach breaks from the pack: in their efforts, global drugmakers like Roche Holding Ag and Biogen Inc. have focused on a protein called beta amyloid, which forms clumps of plaque in the brain and is thought to be a cause of the disease. But a lack of progress has led to calls from researchers to rethink the industry’s fixation on beta amyloid.

Roche scrapped its drug trials in 2019 after concluding they would fail. Biogen said in October that it planned to file for FDA approval for its experimental Alzheimer’s therapy after re-looking data from clinical trials that had earlier seemed disappointing.

It now plans to file for approval in the third quarter, a delay from its earlier goal of an early 2020 submission.

Green Valley, meanwhile, is pressing ahead.

“Good results coming out of the drug trials in China have boosted our confidence,” said Li. ‘We believe it will eventually be launched globally to benefit more patients.”