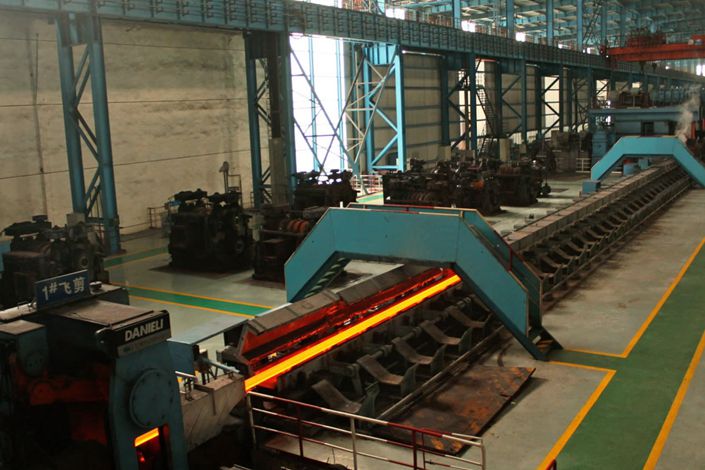 (Nikkei Asian Review) — Although China is the world’s leading steel producer, no single Chinese steelmaker has made it to the top spot, until now.

China Baowu Steel Group surpassed ArcelorMittal in the production of crude steel in 2019, according to publicly available data, ending the reign the European heavyweight has held since 2001. Putting Baowu over the top was its takeover last September of China’s Magang (Group) Holding, which was then the country’s ninth-ranked steel supplier.

The outcome underscores the dominance China wields in the global steel industry. At the same time, the country has yet to rein in excess capacity in any meaningful way, setting the stage for steel prices to fall off a cliff.

Baowu, the parent of Baoshan Iron & Steel, has made clear its intentions to shake up the industrial landscape. “We aim to become a global leader in the steel market,” in technology and profitability, said Chairman Chen Derong after the company became the world’s largest steelmaker.

At the moment, Baowu mostly sells steel domestically. But the company has indicated that it will actively compete with international rivals. Back in February of last year, Chen told employees that overseas operations will be essential to securing the company’s future.

Baowu was born in 2016 from the merger of Baosteel Group and Wuhan Iron & Steel Group, then China’s fifth- and 11th-largest steelmakers, respectively. The consolidation came about as China weathered international criticism for churning out too much steel.

The ostensible purpose for creating Baowu was to slim down production capacity. But pressure from the government drove the company to continue adding scale.

China has reduced the number of major steelmakers from 130 in 2010 to about 100 now. The government maintains that it slashed excess capacity by 150 million tons through 2018, equal to about 10% of the total.

At the same time, merged entities are installing high-capacity blast furnaces under the guise of updating equipment.

Japanese steelmakers in particular wonder if China’s ultimate purpose is to create a supersize steel supplier capable of beating international rivals. Baowu is Exhibit A of those concerns.

The cost of raw materials, such as iron ore, accounts for 70% of the price of steel. Procuring raw material by scale, then mass-producing the final product at giant steel mills provides a valuable competitive edge.

Chinese steelmakers plan to establish more than 50 million tons worth of additional capacity in Southeast Asia alone, according to the Japan Iron and Steel Federation. The scale is on a par with the entire domestic capacity of the Nippon Steel group, and the expansion is expected to continue ramping up.

Baowu churned out 95.22 million tons of crude steel last year, up 41% from 2018. ArcelorMittal’s output shrank 7% to 89.8 million tons due to soft demand from the automobile industry, a result of the stagnant economies in Asia and Europe.

With the impact of the coronavirus pandemic setting in, the mismatch between Chinese steelmakers and their global rivals is being felt in the international market.

Steelmakers around the world are cutting production in response to disruptions in auto manufacturing. In Japan, Nippon Steel decided to suspend operations at three blast furnaces. JFE Steel will also idle some blast furnaces. Furnaces in the U.S. and Europe are suspending operations as well.

In China, steel production in March dipped just 2% to 78.98 million tons, according to the World Steel Association. It appears authorities are prioritizing job security over adjusting the supply-demand balance.

In fact, blast furnace utilization at Baowu and other major Chinese steelmakers has essentially returned to normal levels this month, said the Japan Iron and Steel Federation.

Chinese producers keep making steel despite the drop-off in internal demand. That has produced an unnatural market situation in which the price of raw materials has climbed but the price of finished steel has come down.

China’s steel inventories are bursting at the seams. Members of the China Iron and Steel Association logged an all-time high of 21.4 million tons on March 10. If those stockpiles end up being exported cheaply, a less-stable steel market would result.

The global steel industry has attempted to address the overcapacity by holding an international forum since 2016. But China forced the forum’s dissolution last year, citing disagreements.

Multiple nations seek to maintain the international dialogue on excess steel production, even with the absence of Beijing.

“I prefer the continuation of the multilateral framework toward the resolution of surplus capacity,” said Hiroshi Kajiyama, Japan’s minister of economy, trade and industry.

But without China’s participation, there is little prospect of attaining that goal. With Chinese steelmakers accounting for six of the globe’s top 10 producers in 2018, according to the World Steel Association, China holds outsize leverage.

“The risk that prices will fluctuate in a fashion disconnected from market principles will continually grow as Chinese enterprises scale up,” said a source at a major Japanese steelmaker.

Chinese enterprises are able to ship products without regard to profitability due to generous government support, as well as differences in tax and accounting systems. Such dynamics have driven rivals in the liquid crystal display and solar panel industries into a corner. The same scenario is playing out for global steelmakers, too.