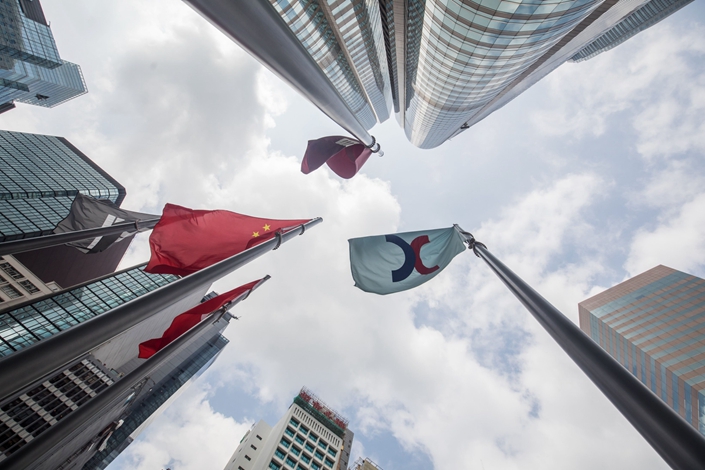 (Bloomberg) — Chinese e-commerce giant JD.com Inc. has filed confidentially for a second listing in Hong Kong, according to people with knowledge of the matter, joining rival Alibaba in tapping the city’s stock market for funds.

The offering could raise at least $2 billion, the people said, asking not to be identified because the information is private. The Beijing-based company, which currently trades on Nasdaq, has a market value of $64 billion.

The deal comes after Alibaba Group Holding Ltd. raised $13 billion in a Hong Kong share sale last year. That much larger deal was hailed as a homecoming for Chinese companies and a win for Hong Kong Exchanges & Clearing Ltd., which lost these deals to its U.S. counterparts a decade ago because it didn’t allow dual-class share voting at the time. The bourse, which relaxed the rule in 2018, was up as much as 2.4% Wednesday.

JD’s listing could come as early as the second half of the year, according to one of the people. Deliberations are ongoing and the size of the offering could still change, the people said. A representative for JD.com didn’t immediately respond to requests for comment.

JD’s decision comes after the Chinese online retailer’s forecast for at least 10% revenue growth in the March quarter suggested its business was proving more resilient to the epidemic than anticipated.

It may fare better than its peers because it employs a direct-to-consumer sales and in-house logistics model that may prove more resilient to short-term disruptions than platforms that connect merchants with buyers, some analysts say. Away from the outbreak, JD continues to win more consumers from smaller Chinese cities and towns, while demand for the electronics it depends on should rebound after the outbreak subsides.

The company’s shares slid 4.4% Tuesday, but have risen more than 23% this year while the S&P/BNY Mellon China ADR Index, which tracks U.S.-listed Chinese companies, is down 5.2% during the same period. IFR Asia reported earlier Tuesday that the company had filed for a Hong Kong listing confidentially.