Pascal Lamy: China Must Take Leadership on Protecting the Environment 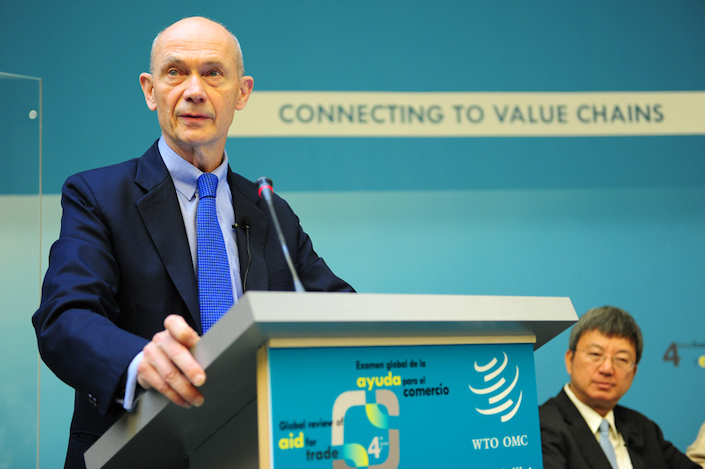 Pascal Lamy is a former director-general of the World Trade Organization and currently president of the Paris Peace Forum.

The global Covid-19 pandemic has paralyzed our way of life, causing hardship, misery and suffering the world over. It has shown how vulnerable our economic system is to these kinds of shockwaves and highlighted the undeniable link between biodiversity and climate crises.

As we start to envision a world post-coronavirus — no doubt a key topic of discussion at China’s coming National People’s Congress — China’s fundamental role and responsibility is to take leadership on environmental action, including protecting the world’s oceans. This must be recognized more than ever before.

Healthy ecosystems on land and sea support economic growth. This is part of China’s principle of “Ecological Civilization,” written into the constitution in 2012. There is increasing awareness, including at the highest levels of leadership, that environmental protection does not have to come at the expense of the economy. In fact, earlier this month President Xi Jinping said, "The environment itself means the economy. If you protect the environment, you will receive rewards from the environment."

Environmental protection is also important to the Chinese people, according to a new public opinion study prepared by Kantar, a leading data and insights company. Of those surveyed in China, 99% said they “support marine protected areas — areas off limits for fishing and commercial use — to support wildlife and habitat.”

Given what we know now, it will be impossible for humanity to go back to a business-as-usual approach that favors a destructive, extractive economic model. Doing so would continue to expose us to further environmental, social and economic instability. On the contrary, we need investment in nature because this will generate huge environmental, social and economic benefits. There is much to gain from preserving nature, especially for an economy like China’s, which has the world’s highest absolute amount of GDP in nature-dependent sectors at $2.7 trillion.

As the world comes to understand that there will be no full return to pre-Covid-19 ways of life, we have a unique moment and opportunity to reshape not just the way humanity engages with itself, but how we engage with the most important global resource we have — the natural environment.

The ocean is often overlooked and undervalued, but it is an important contributor to the global economy. If it were a state, the ocean would be the world’s seventh-largest economy with a GDP equivalent to $2.5 trillion, or 5% of global GDP. Its assets are valued at more than $24 trillion; it supports the livelihoods of more than 3 billion people; and it provides the primary protein for more than 2.5 billion people. An economy this large should be safeguarded, and yet climate change and unsustainable global practices are damaging its health.

The global ocean economy could more than double by 2030. Infrastructure investment of as much as $90 trillion is expected globally over next 20 years, much of it along coastlines and in ocean sectors such as aquaculture, tourism, marine energy and offshore installations.

China is the world’s largest fisher and ocean farmer and is building power plants in the sea. It is therefore in China’s interests as well as those of the rest of the world to provide leadership to ensure that as this global ocean economy expands we do not make the mistakes of the past. The science is clear — safeguards and strong conservation rules, such as marine protected areas, need to be enforced to ensure that the ocean can continue to provide crucial goods and services for future generations.

We cannot underestimate the critical importance of China’s leadership role on environmental action at this moment. As hosts of the next United Nations Convention on Biological Diversity Conference of Parties, China has a huge responsibility as well as a timely opportunity in the current crisis to ensure that a strong, 10-year recovery plan for nature is agreed. This conference was originally set to take place in Kunming Oct. 15-18 but has been postponed because of the pandemic.

Even so, a key opportunity for major and long-lasting nature protection remains in what some have been calling “The Super Year for Nature and Biodiversity.” In November, the global body responsible for conserving the waters surrounding Antarctica, an area critical to the world’s oceans, will meet to consider agreements on three large-scale marine protected area proposals.

The decision-making body for the Southern Ocean is the Commission for the Conservation of Antarctic Marine Living Resources. It is a consensus-based body composed of 26 member states including the European Union. It meets once a year to consider conservation measures, including proposals for protection.

Progress on this year’s proposals for marine protected areas depends on China moving them forward. Protection of these areas in the East Antarctic, Weddell Sea and Antarctic Peninsula would amount to nearly 4 million square kilometers of ocean protection in the threatened waters surrounding the southernmost continent, removing stressors that harm these fragile ecosystems and marine wildlife, building resilience to climate change and restoring valuable marine biodiversity.

As the world recovers from the current crisis, more than ever we need strong global leadership. Antarctic Ocean protection would be an excellent opportunity for China to demonstrate this leadership and would result in one of the largest acts of environmental protection in history.