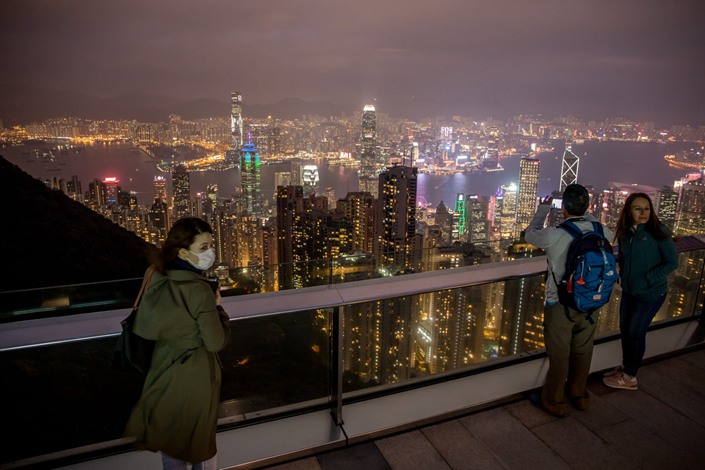 People look at the city's skyline from a viewing terrace at Victoria Peak in Hong Kong on Feb. 3. Photo: Bloomberg

(Bloomberg) — China’s financial regulators unveiled a sweeping plan to facilitate cross-border transactions and investments between Hong Kong, Macao and several other cities in southern China as part of the government’s ambition to transform the coastal region into a high-tech megalopolis to rival California’s Silicon Valley.

The People’s Bank of China, together with the nation’s banking, securities and foreign exchange regulators, on Thursday announced a slew of potential measures to support the so-called Greater Bay Area, including allowing Hong Kong and Macao residents to buy wealth management products issued by Chinese mainland lenders in the region and vice versa.

China’s policymakers are seeking to turn the area into a global innovation hub, boost infrastructure connectivity between cities and strengthen Hong Kong’s role as an international center of finance, shipping and trade as well as the center for the offshore yuan business.

Hong Kong, Macao, Shenzhen and Guangzhou are the four key Bay Area cities, driving the region’s economic development, according to the blueprint announced earlier last year. HSBC Holdings Plc has estimated the region — with more than 67 million residents — would encompass a trillion-dollar economy and eclipse Japan as the world’s fourth-largest exporter.

Other key points in the financial plan include:

• Setting up a futures exchange in Guangzhou