Reopening China’s Economy: Tracking the Heartbeat of a Recovering Nation

By Cheng Li and Jian Chen 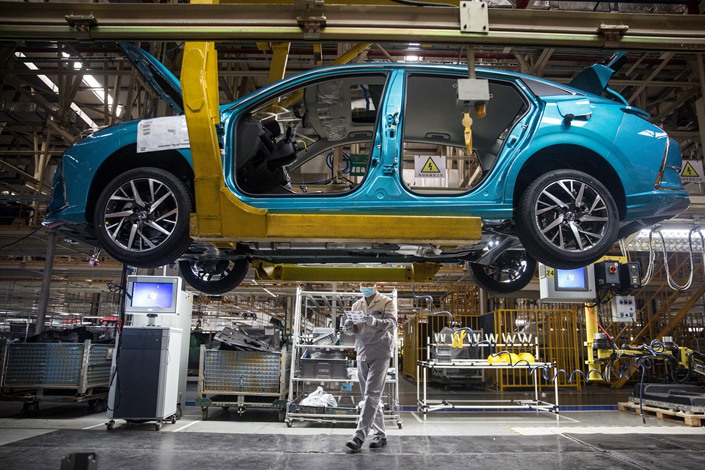 Any comparative analysis of China and the United States — and any lessons or experiences that either country may learn from the other –– should recognize the profound differences between these two nations in terms of their political systems, economic structures, social fabric and cultural norms. Yet, as the world’s two largest economies, with vast territories and substantial populations, China and the United States often confront similar challenges. When it comes to the impact of the novel coronavirus, both countries have been devastated by its outbreak and the searing speed of its spread, though the developments have been experienced at different time intervals.

The spread of coronavirus in China began to plateau around mid-February when the country reported 75,567 confirmed cases and 2,239 deaths. At that time, only 1,152 cases had been diagnosed outside of China, resulting in eight deaths. At the time of this paper in mid-May, the number of recorded cases in the United States has accounted for around one-third of infections and 28% of Covid-19 deaths globally. These are astonishingly high proportions considering that the United States constitutes only around 4% of the world population.

All of the 31 province-level entities in China reported infections, as did all 50 states in the United States, which were simultaneously placed under a federal disaster declaration for the first time in history. The closures in China began during the week of January 20th, including a tight lockdown across the Wuhan metropolitan area and nearby regions beginning January 23. Facing significant growing pressure to combat negative growth rate, the rapid rise of unemployment and the potential disastrous resulting domino effects, both China and the United States have been striving to reopen their economies. It should be noted that, by late April, as a result of the continuing growth in infections and deaths in the United States, the U.S. economy had been shut down for a longer period than China’s economy. But a series of premature reopenings in the United States could potentially have catastrophic health and economic outcomes.

Given the currently widely held perception that the outbreak of Covid-19 in China occurred a few months earlier than in the United States, an empirical analysis of the measures China pursued throughout its economic reopening in March and April could be helpful to understanding the possible situation in other nations. No country, especially those with economies as colossal as China and the United States, could expect to completely reopen overnight. Therefore, the regional variations and sectoral priorities employed––either intentionally or spontaneously––in the economic reopening of China deserve particular attention.

Table 1 provides an overview of the return-to-work rate in all of China’s 31 provinces and first-tier metropolises. It arranges localities by their share of national GDP, reflecting their respective economic weight. The table also provides relevant information about the population of each province/city, the reported number of infections and the number of people infected per million. The highlighted columns compare the return-to-work rates on average in March and April 2020, with January 24, 2020 serving as the control. The original research also includes data on the categories of stock market-listed companies and hospitals. For the sake of the length limits, this paper focuses on only three important sectors. The return-to-work rate is retrieved from the Mastercard Caixin BBD China New Economy Index, compiled by Caixin Insight Group, by recording the daily flow of people across the virtual perimeters around manufacturing facilities, office buildings, and shopping malls. There are three important observations that can be made based on the data.

In examining the return-to-work rate across different provinces and first-tier cities, we found that the rate is negatively correlated with infected case numbers (per million people): this signifies the higher the infection rate, the lower the subsequent rate for workers who return-to-work. For example, Hubei and Beijing, the two localities that had the highest infection rate, also had the lowest return-to-work rate in March (with the exception of shopping malls in Tianjin). Yet, the correlation between these two variables in April is lower than it had been in March, which indicates that, over time, infection rate has a declining impact on return-to-work rate. This indicates that the gradual improvement in the Covid-19 situation over these two months enabled people to return to work at increasing rates.

This gradual trend toward increasing economic activities is particularly evident in Chart 1, which provides nationwide information on a daily basis from the government’s order of closure of work around January 24 to the last week of April when a considerable number of manufacturing factories resumed, office clerks returned to work, and shopping malls reopened. The deep V-shaped valleys reflected weekly on the chart represent the drop-in work over weekends. In a sense, this chart — which some might find reminiscent of an echocardiogram — has graphically tracked the “heartbeat” of a recovering economy.

This data, as presented in Table 1 and Figure 1, shows that manufacturing firms have the highest return-to-work rates, followed by office buildings and subsequently shopping malls, with the lowest rates. This observation reflects a clear priority order in the approach to reopening the economy: High-impact, low-risk businesses are reopening more quickly (indicating their higher priority), while low-impact, high-risk business are reopening at a slower speed. Figure 2 shows the nationwide changes in the return-to-work rate between March and April 2020, reaffirming the sectoral priority order. By late April, the flow of people at manufacturing firms and office buildings had already reached 81.3% and 74.7%, respectively, of their pre-lockdown peaks in early 2020. China’s official data tracking the return-to-work rate of 84% of the country’s small and medium-sized manufacturing enterprises in mid-April is similar to the findings of this study.

In comparison, the recovery rate of shopping malls was relatively low at 65.8% in April despite some expectations that Chinese domestic consumption would have a “strong rebound” after consumers had been sequestered at home for two months, especially considering that they had largely missed the Spring Festival shopping season. The relatively low rate of shopping mall traffic observed in this study is very much in line with a Financial Times report that customer traffic in Chinese cities was about half of its normal levels for both small brick-and-mortar stores and large Walmart stores during the same period.

Two factors may have contributed to this phenomenon. First, Chinese urban dwellers have remained cautious after the pandemic, and they have tended to reduce nonessential activities. And second, with the world’s most advanced e-commerce systems, China has much a higher number (but lower percentage) of internet users than the United States. In 2020, China had 904 million internet users (64.5 % of China’s population) while the United States had 313 million users (89.8 % of the U.S. population). Similarly, 583 million people used mobile payment applications in China last year, almost ten times the number using similar applications over the same time in the United States (62 million). It has been widely noted that, during China’s battle against the coronavirus, “stores had to quickly adjust their ideas about e-commerce in order to stay afloat.” In addition, some Chinese cities have also promoted drive-through pick-ups and other alternative shopping procedures.

The Chinese emphasis on the reopening of manufacturing facilities is clearly driven by concerns about economic growth and unemployment. But this does not necessarily contradict the government’s pronounced position and more general sentiment that public health should be the most important priority. A review of the GDP share of China’s 31 provinces and first-tier cities and their return-to-work rates does not show any significant correlation. For example, in terms of their share of national GDP, those provinces with the highest share (Shandong, Zhejiang, and Fujian), mid-range share (Chongqing), and lowest share (Gansu, Ningxia and Tibet) all experienced a high return-to-work rate in the manufacturing sector in April. Some provinces with a relatively high share of national GDP — such as Henan, Hubei, Anhui and Jiangxi — had the lowest return-to-work rate (see Table 1).

It is widely known that, out of fear of a possible “second wave” of Covid-19 and an increase in imported cases from overseas, Chinese authorities implemented far more restrictive rules and requirements than U.S. local governments during both the lockdown and economic reopening periods. Also, China’s local governments and manufacturing enterprises, especially in coastal regions such as Guangdong and Zhejiang, have also adopted multi-step guidelines to gradually move toward full-scale reopening. However, more recently, given the continuing decline of infections, the country has begun to promote domestic tourism, including to Hubei province during the May holiday season, reflecting a new phase in China’s reopening.

It is still too early to forecast the degree of success and limitations of China’s economic recovery. The expected drastic decline in exports, the uncertain nature of global supply chains and industrial realignment, the potential for a large-scale exodus of foreign companies, and U.S. export controls and other restraints on China constitute some of the new challenges that China will likely confront. Unemployment pressures will continue to be a primary concern for the Chinese leadership. It was officially reported that only roughly 5 million people lost their jobs during the first two months of 2020, with an urban jobless rate of 6.2% in February. These figures are remarkably lower than those in the United States at present. However, within both countries it is likely that the real rate of unemployment is significantly higher than reported, having failed to capture workers who are underemployed or have left the job market entirely in the midst of the Covid-19 economic slowdown.

China’s promotion of domestic consumption, strengthened by the new drive for urbanization, a growing middle class, advantages in e-commerce, and an ongoing emphasis on innovation, green development, public health, social welfare and financial opening, will likely make China even more competitive in the global economy in the years to come. It is in the interest of Washington to have an accurate and balanced assessment of this tremendously important economic competitor and partner.