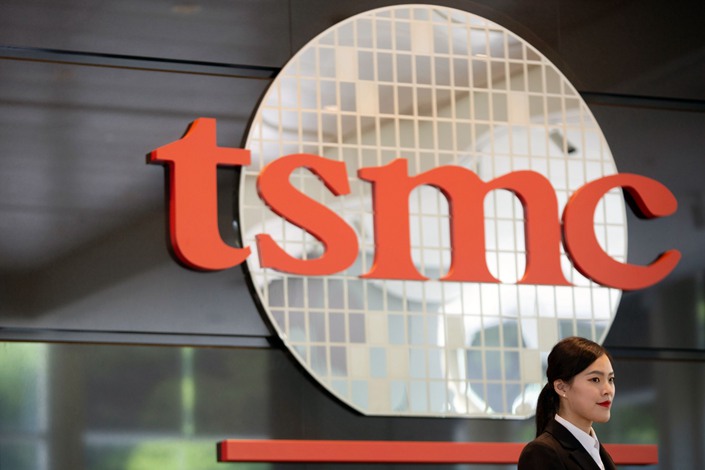 Signage for Taiwan Semiconductor Manufacturing Co. is displayed at the company's headquarters in Hsinchu, Taiwan, on June 5, 2019. Photo: Bloomberg

(Bloomberg) — Since its founding more than three decades ago, Taiwan Semiconductor Manufacturing Co. has built its business by working behind the scenes to make customers like Apple Inc. and Qualcomm Inc. shine. Now the low-profile chipmaker has landed squarely in the middle of the U.S.-China trade war, an incalculably valuable asset that both sides are vying to control.

The Trump administration opened up a new front in the conflict on Friday by barring any chipmaker using American equipment from supplying China’s Huawei Technologies Co. without U.S. government approval. That means TSMC and rivals will have to cut off Huawei unless they get waivers from the U.S. Commerce Department. TSMC has already stopped accepting new orders from Huawei, the Nikkei newspaper reported Monday.

The move threatens to wreak havoc throughout the complex ecosystem that produces technology for consumers and companies around the world. An attack on Huawei threatens not just its workers and its standing as a world leader in making smartphones and telecom equipment, but also hundreds of suppliers. The Chinese government has vowed to protect its national champion, with threats of retribution against U.S. companies that depend on China like Apple Inc. and Boeing Co.

“China likely will retaliate, and investors should brace themselves for a possible trade war escalation,” Sanford C. Bernstein & Co. analysts led by Mark Li wrote in a research note on Friday.

Huawei suppliers across Asia fell on Monday, with AAC Technologies Holdings Inc., Q Technology Group Co., Sunwoda Electronic and Lens Technology all sliding 5% or more. TSMC, which gets an estimated 14% of its revenue from Huawei, dropped as much as 2.5%.

The U.S. already blacklisted Huawei last year, preventing American companies from supplying the Chinese company unless they got a license. The latest move tightens those restrictions to prevent chipmakers — American or foreign — from working with Huawei and its secretive chip-design unit HiSilicon on the cutting-edge semiconductors they need to make smartphones and communications equipment. The Trump administration sees Huawei as a dire security threat, an allegation the company denies.

“We must amend our rules exploited by Huawei and HiSilicon and prevent U.S. technologies from enabling malign activities contrary to U.S. national security and foreign policy interests,” Commerce Secretary Wilbur Ross said in a tweet.

Huawei countered by accusing the U.S. of ulterior motives.

“The so-called cybersecurity reasons are merely an excuse,” Richard Yu, head of the Chinese tech giant’s consumer electronics unit wrote in a post to his account on messaging app WeChat. “The key is the threat to the technology hegemony of the U.S” posed by Huawei, he added.

The U.S. decision is likely to hurt not just Huawei and TSMC, but also a clutch of American players including gear-makers Applied Materials Inc., KLA and Lam Research Corp. themselves, Morgan Stanley analysts wrote. Disruptions to Huawei’s production will also hurt U.S. customers from Micron Technology Inc. and Qorvo Inc. to Texas Instruments Inc., they said. But “it bears repeating that any escalation of trade tensions is negative for the stocks overall,” they wrote in a research report.

It would have been impossible to imagine TSMC becoming such a coveted chit between the world’s great powers when it was founded in 1987. Morris Chang, born in on the Chinese mainland and trained in the U.S., started the company as a so-called foundry, manufacturing semiconductors for any customer that didn’t want to construct its own fabrication facility, or fab.

At the time, the business wasn’t nearly as glamorous as making chips yourself. Dominating the industry at the time were companies like Intel Corp. and Advanced Micro Devices Inc., which made processors for personal computers. “Real men have fabs,” AMD co-founder Jerry Sanders would say, making clear that was an insult.

But in the intervening years, the foundry industry has become far more strategic for the technology industry. Customers from Apple and Huawei to Qualcomm and Nvidia Corp. have found they can innovate more quickly if they focus on chip designs and then turn to foundries like TSMC to produce them. Innovators in emerging technologies like artificial intelligence or the internet of things also depend on foundries to crack open new markets.

Today, many of the chips for mobile phones, autonomous vehicles, artificial intelligence and any other key technology are made at foundries. TSMC has become the leading foundry in the world by investing heavily in ever more advanced fabs, with annual capital spending of about $16 billion this year.

It can now manufacture at 5 nanometers, about twice the width of human DNA, while China’s top foundry, Semiconductor Manufacturing International Corp., or SMIC, is at 14 nanometers. That makes TSMC’s chips far more powerful and energy efficient.

Huawei and HiSilicon will have few good options if they are cut off from TSMC. One possibility is to procure off-the-shelf chips from Taiwan’s MediaTek Inc. and South Korea’s Samsung Electronics Co., an option Huawei’s rotating Chairman Eric Xu mentioned in late March. But even that may no longer be viable under the new Commerce Department restrictions.

SMIC itself is keen on moving up the technology ladder, eyeing a secondary share listing that could raise more than $3 billion on top of a large capital infusion from the state.

But that’s a longer-term endeavor and Huawei’s products meanwhile are likely to suffer, putting them at risk of falling behind those of rivals like Apple or Xiaomi Corp.

For TSMC, it’s growing ever more difficult to remain neutral amid the growing tensions between the U.S. and China. The company brands itself “everybody’s foundry,” effectively the Switzerland of the tech industry. It supplies Chinese customers like Huawei and the American military, while relying on U.S. producers of semiconductor-making equipment like Applied Materials and Lam Research.

TSMC did take one step closer to the U.S. last week, saying it would build a $12 billion chip plant in Arizona. The Department of Defense has expressed concern that overseas fabs may be vulnerable to cyberattacks and domestic manufacturing would assure a more reliable supply of chips.

The proposal appears to be carefully calculated to address such security issues without too much damage to profits or its political balancing act. Suppliers to the military, such as Xilinx Inc., would be able to use the U.S. fab, but the facility would likely account for less than 5% of revenue so margins won’t be compromised.

It’s not clear if the plans for a U.S. plant will win TSMC leniency in supplying Huawei, however.

“TSMC will not be granted or granted a license based on their intent to build a 5 nanometer fab here in the United States. That’s not part of it at all,” Keith Krach, undersecretary for economic growth, energy and the environment at the State Department, told reporters on a call. “There’s no assurance on that and we don’t anticipate that.”

Meanwhile, China appears to be preparing to retaliate for the new restrictions on Huawei. On Friday, the Global Times — a Chinese tabloid run by the flagship newspaper of the Communist Party — reported Beijing was ready to initiate countermeasures, including imposing restrictions on Apple, suspending the purchase of Boeing airplanes and putting U.S. companies on an ‘unreliable entity list.’

The list will cover “foreign entities that cause actual or potential damage to Chinese companies and industries,” the newspaper said.