By Zhang Qizhi and Gavin Cross 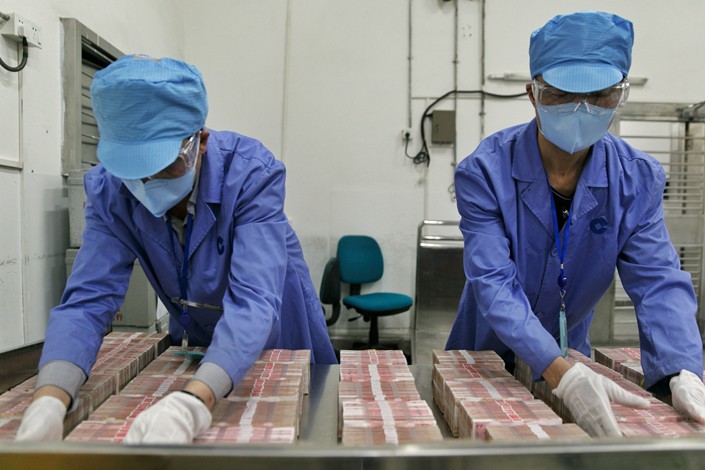 A quite heated debate over monetization of China’s fiscal deficit and special treasury bonds (STB) has erupted since May 14, with heavy hitters on both sides. It is unusual for a relatively theoretic debate to enter the public’s view. Perhaps because there is so much at risk — a truly “trillion dollar” question, as the government work report issued today announced 1 trillion yuan ($140 billion) quota for STBs this year.

Liu Shangxi, president of the Academy of Fiscal Sciences, began the discussion with a call (link in Chinese) for deficit monetization to provide greater fiscal policy space given the need to increase spending on the “six guarantees.” His camp argues that traditional fiscal expansion is likely to actually bring greater risks, and that we should rethink existing monetary and fiscal policy theories to improve coordination between the two.

This viewpoint has been roundly rejected (link in Chinese) by PBOC monetary policy committee member Ma Jun and others including Wu Xiaoling, Zhang Wenkui, Zhong Zhengsheng (links in Chinese) and more ... like we said, it’s been heated. This camp cautions against throwing fiscal discipline out the window, and allowing so-called “voodoo economics” to push China down a slippery slope of inflation, real estate bubbles, and government malinvestment crowding out of the private sector.

Given that Modern Monetary Theory (MMT) is still fairly far outside the mainstream, it is remarkable that Liu’s opinion has drawn such a strong response.

One reason for such fierce reaction is that it touches upon the years old problem of policy coordination between China’s fiscal and monetary authorities. In fact, this recent debate echoed the one between the central bank and the Finance Ministry back in July 2018, where both sides urged the other side to bear more burdens of providing economic stimulus.

Another reason is the significant divergence between the two camps’ view of the current state of the economy. Some pro-monetization economists admits the extreme and dangerous nature of monetization, however they point to the grave damage the Covid-19 pandemic has caused and argued that in extreme times like this, extreme measures are needed. The camp that rejects monetization argues that China’s policymakers still possess ample policy “ammunition” to help steer China’s economy amid the negative impact of the pandemic, and therefore monetization is unnecessary.

Unfortunately, however, focus has shifted away from the basic principles of MMT, fiscal and monetary policy coordination or the state of China’s economy, and turned more into a discussion of fiscal discipline.

Of course, that conversation is also an important one. Just like Caixin’s editorial has pointed out, China learned the dangers of monetization the hard way. But we’re eager to see if the debate comes back around to Liu’s original assertions about the nature of money and impact of treasury bonds on China’s liquidity environment.

On May 22, the Premier Li Keqiang announced the issuance of 1 trillion yuan of special treasury bonds, shunning market expectation of 3 trillion. It is not clear whether or not these STBs will be monetized by the central bank yet, but the relatively small size of the STB issuance has given us a hint about the mindset of top policymakers. It seems that these policymakers are very cautious when issuing STBs, which are outside the constraints of normal fiscal discipline, and therefore are unlikely to support the idea of dumping fiscal discipline altogether.