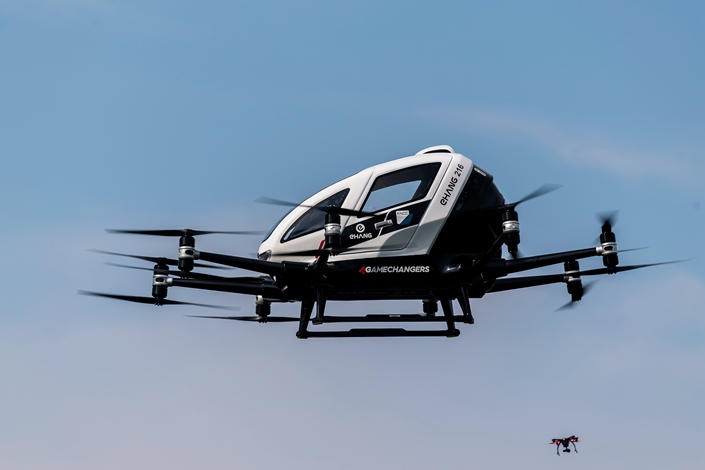 EHang, a drone operator that has pioneered the use of self-driving “air taxis” for sightseeing trips in China, is seeking to move into air cargo transportation.

The Guangzhou-based company has obtained approval from the Civil Aviation Administration of China (CAAC) to use its autonomous aerial vehicles in a commercial pilot program for heavy-lift air logistics, according to a company statement released Wednesday.

The trial will be conducted in the city of Taizhou in eastern China’s Zhejiang province, using EHang 216 passenger-grade autonomous aerial vehicles. Those drones will be authorized to transport up to 150 kilograms of goods per flight “between ground and hilltop and between shore and islands”, the statement said.

EHang said that the approval is based on the Pilot Operation Rules (Interim) for Specific Unmanned Aircraft introduced by the CAAC in 2019, when the company was also allowed by the government agency to pilot programs aimed at exploring the country’s airworthiness standards and management systems for autonomous aerial vehicles.

The Nasdaq-listed company is also planning to gradually expand the air logistics pilot project to other parts of China after it collects enough operational data, the statement added.

EHang’s foray into air logistics comes a month after it announced plans to build an “airport” in a southern Chinese city popular among tourists for its karst topography. Construction of the facility is set to be completed by the end of this year, when some 20 EHang 216 two-seat autonomous aerial vehicles will take tourists for sightseeing trips, the company said.