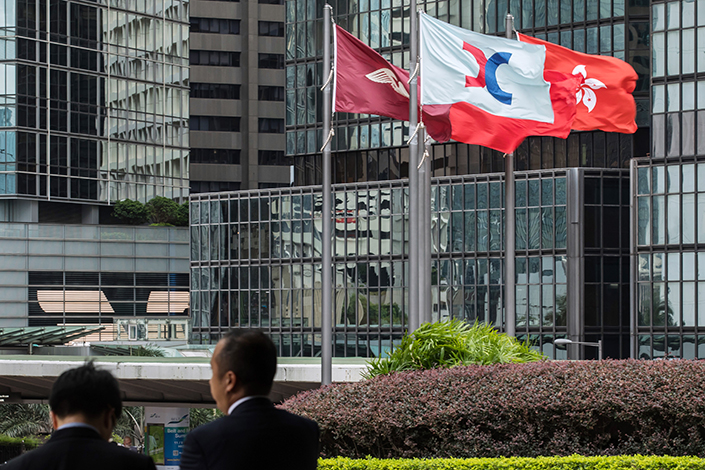 On May 29, U.S. President Donald Trump announced that the country would “revoke Hong Kong’s preferential treatment as a separate customs and travel territory from the rest of China.”

There are now three major privileges that Hong Kong enjoys: it has independent tariff status; it can receive technology transfers from the U.S., and Hong Kong dollars can be freely exchanged with U.S. dollars. Other, less important policies include the U.S. encouraging its companies to invest in Hong Kong and recognizing its passports.

We think the U.S. may abolish Hong Kong’s independent tariff status in the future, but it is unlikely to end free exchange between the two currencies. The latest announcement looks to be “much cry and little wool.” In part, we can see this from how short-lived the markets’ reaction was, bouncing back — even to a marginal extent — not long after.

First, revoking Hong Kong’s independent trade status and putting tariffs on the city would have limited impact on Hong Kong’s own exports to the U.S. which are mostly intermediary trade. Hong Kong’s domestic exports to the U.S. annually amount to less than HK$4 billion ($516 million), accounting for only 0.13% of Hong Kong’s gross domestic product. But Hong Kong’s imports from the U.S. have reached over HK$200 billion, making the city one of the U.S.’ largest sources of trade surplus. If Hong Kong decides to impose tariffs on U.S. goods, they could have a substantial impact on American exporters. However these tariffs are unlikely to be imposed, given that the Hong Kong authorities may not want to change the city’s niche as a free port. Currently tariffs between Hong Kong and the U.S. are basically zero.

On the second privilege, technology transfers, Hong Kong Financial Secretary Paul Chan Mo-po has said that importing advanced technologies from the U.S. has been difficult for a long time as the White House has increasingly restricted Chinese firms’ access to U.S. tech on national security grounds in recent years. However, there are Japanese and European alternatives for some technologies which are not the most cutting-edge. So importing tech won’t be a big problem for Hong Kong as long as its relations with its other trading partners remain cordial. Therefore, if the U.S. restricts technology transfers to Hong Kong, neither Hong Kong nor the mainland will be affected significantly.

If Washington abolishes free convertibility between the Hong Kong and U.S. dollars, we might face a “lose-lose-lose” situation. Hong Kong’s linked exchange rate system would be shaken and its status as a global financial center could also be weakened. Lots of capital may flow out of the city. Turbulence in the Hong Kong financial system could cause pain for the mainland in foreign direct investment, the internationalization of the yuan and the financing of mainland enterprises in overseas markets. The U.S. could also face some pain, as there are over 1,300 American enterprises in Hong Kong and 85,000 American citizens work in the region. Also the impact of decoupling on the dollar’s status should also be considered as Hong Kong uses the U.S. dollar as its reserve currency.

Amid social unrest which could impact the presidential election in November, Washington may adopt a “say more but do less” Hong Kong policy, which would only upset market sentiment in the short term. After Trump’s Friday speech, many markets around the world rebounded after a dip, as the bad news was digested.

The U.S. will likely abolish Hong Kong’s privileged tariff status in the future. It sounds terrifying, but the actual impact on the economy and market fundamentals would not be that great. Chinese stock markets are likely to quickly digest the bad news after short-term fluctuations and remain relatively stable, as China’s economy has been recovering post-pandemic, the government has unveiled a macro policy package, and the returns of yuan assets remain relatively strong.

But the U.S.’s changing Hong Kong policy and the possibility of a broader escalation in Sino-U.S. tension may exert pressure on market’s expectations and risk appetite for some time. It’s unlikely that the two dollars will decouple, but some Hong Kong enterprises may face sanctions similar to those placed on Huawei Technology Co. Ltd. These could have a major impact on some firms and their stock prices.

There have been some changes recently in China-U.S. relations. On May 1, Trump accused China of mishandling the Covid-19 outbreak and said he was considering retaliatory measures against China. Raising tariffs on China was one of the options. On May 15, the U.S. Department of Commerce announced plans to limit Huawei’s purchase of semiconductors that are the direct product of certain U.S. technologies. On May 20, the U.S. Senate passed a bill which could affect Chinese firms’ listing in the country.

But generally speaking, the direction of China-U.S. relations has not changed, and Trump’s China policy remains focused on the economy, trade and technology. Hong Kong is only one of many issues in the two countries’ relations, and it is not yet the major battleground.

Zhong Zhengsheng is a former director of macroeconomic analysis with consultancy CEBM Group Ltd., a subsidiary of Caixin Insight Group.