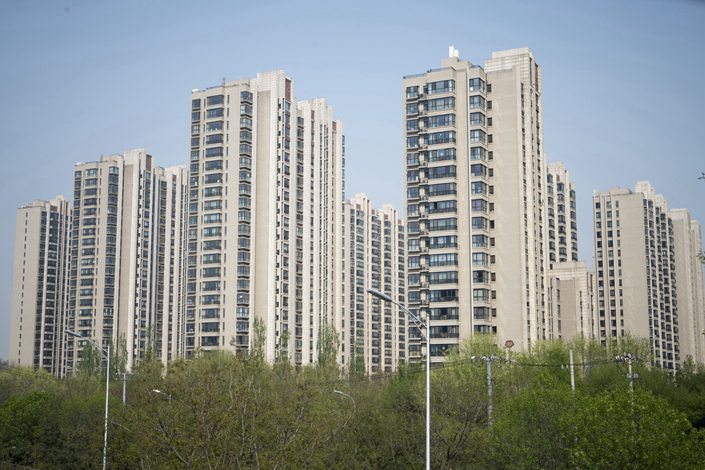 Residential buildings stand in the Taiyanggong area of Beijing in April 2018. Photo: Bloomberg

(Bloomberg) — For the longest time, the only way to get exposure to China’s real estate market, for mom and pop investors at least, was to buy a house.

That’s all set to change with the advent of real estate investment trusts (REITS).

China kicked off a REIT trial in late April that will initially focus on pooling capital to fund infrastructure projects like highways and airports. If successful, the program may be expanded to include traditional real estate, exposing individual investors to a market Goldman Sachs Group Inc. estimates could one day be worth as much as $3 trillion.

For retail investors, it would be a whole new world. A lack of investment options has meant Chinese families have around 78% of their wealth tied up in property, more than double the U.S., a 2019 study by Chengdu’s Southwestern University of Finance and Economics showed. Less than 1% is invested in stocks.

Authorities in Hainan in southern China’s said Monday that the development of REITs would be supported and indicated that financing channels for rental properties may be expanded.

REITs are like “owning a slice of the property and reaping a steady income from the rental, which is out of reach of most mom and pop investors,” said Sigrid Zialcita, the Singapore-based chief executive officer of the Asia Pacific Real Estate Association Ltd. “Retail investors in China have had few investment opportunities like this before. REITs are less volatile than stocks, but investors can still enjoy growth from increased dividends or asset appreciation.”

Talks about starting a REITs market in China have been ongoing since 2008, but never came to fruition on concerns they may further fuel home prices, which have risen exponentially over the last 20 years.

The pilot program includes a number of rules to ensure prudence. Retail investors can only buy 16% of any one REIT’s securities and cornerstone retail investors have to hold at least 20% of their investment for a minimum of five years. Institutional investors will control the rest.

To prevent against funds being misused, REITs can only obtain leverage of up to 20% and any money borrowed has to be used for maintenance and renovation rather than acquisitions.

Infrastructure assets must also have been operational for three years, and located in one of six designated economic zones, one of which includes the Greater Bay Area that links Guangdong, Hong Kong and Macau. The ability to generate stable cash flow is also a prerequisite.

“For a brand new product, top policymakers are going to be paying substantial attention to financial stability and safety,” said Stanley Ching, the head of real estate at Citic Capital Holdings Ltd. “When the government feels confident enough REITs won’t flare up the property market, they may expand the trial.”

Until then, infrastructure-only REITs make sense for another reason — they’ll help get China’s battered economy back on its feet.

Encouraging equity fundraising for public projects like highways, bridges and business parks will alleviate the debt strain on local governments. Sinolink Securities Co. Ltd. forecasts China will need to spend about 1.5 trillion yuan ($201 billion) on infrastructure this year to achieve economic expansion of between 5.5% and 6%.

The potential scale of a new infrastructure REIT market is dizzying. Assuming only 1% of existing infrastructure projects are securitized, at least 1 trillion yuan will be released onto equities markets, according to a report last year by Peking University’s Guanghua School of Management.

The biggest obstacle is a legal one.

In Asia, REITs are usually structured so that a trust or a fund holds the assets. But in China, trust products can only be sold to a maximum of 200 qualified investors, while mutual funds can only invest in stocks and bonds.

The trial gets around this by allowing individual investors to buy shares in a mutual fund, which then invests in asset-backed securities that indirectly hold the infrastructure assets.

“It’s an attempt to roll out a REIT framework without modifying existing laws,” Citic Capital’s Ching said. “It’s the first step to a public REITs market and that’s a breakthrough.”