Vietnam to Resume Flights to Guangzhou, Taiwan, Seoul and Tokyo 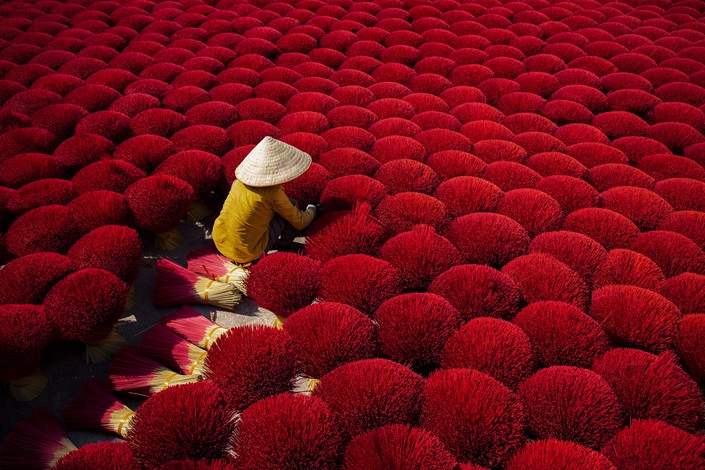 A worker sits surrounded by thousands of incense sticks in Quang Phu Cau, a village in Hanoi, Vietnam, where the sticks have been traditionally made for hundreds of years.

(Nikkei Asian Review) — Vietnam said on Thursday it is preparing to resume international flights to the Chinese mainland, Taiwan, South Korea, Japan and Laos in a bid to sustain growth, with the first flights set for early July, according to sources.

“Regarding the reopening of international flights, ministries will first select some locations to open soon, such as Guangzhou, Taiwan, Seoul, Tokyo and Laos, depending on the general situation,” the government posted to its website on Thursday.

The first flights between tier-1 cities in Asia are expected to cater to business passengers.

Hanoi has assigned the National Steering Committee for Covid-19 Prevention and Control to list overseas “safe zones.” However, the destinations must have reported no new infections of the virus for 30 straight days — a tall order for Tokyo, where 22 new cases were reported on Thursday.

Restarting international flights is crucial for Vietnam, which hopes to shake off the effects of the pandemic to achieve its 2020 economic goals.

“The government didn’t ask to adjust the growth target this year, but said it would strive for the optimal outcome,” National Assembly Chairwoman Nguyen Thi Kim Ngan said on June 8.

Demand for commercial fights in Vietnam is rising as the economy reopens. Many overseas business communities in Vietnam — including those from Japan, Korea and Europe — have urged Hanoi to ease entry restrictions for investors, managers, tech experts and other business-related travelers.

In parallel with preparations for the resumption of international flights, Vietnam is promoting individual negotiations with other countries. On May 9, 68 Japanese businesspersons flew into Vietnam. After entry, they took polymerase chain reaction, or PCR, tests and quarantined for 14 days at the hotel. The Vietnamese government plans to accept several hundred more Japanese businessmen by the end of this month.

The prime minister agreed to the request in Thursday’s statement. Moreover, a large number of Vietnamese stranded overseas, such as students, the elderly, and tourists, are pushing the government to resume international flights.

Hanoi is also working to relax entry restrictions on a country-by-country basis as it tries to ramp up trade, tourism and investment, all of which have stalled due to the pandemic.

The tourist industry — a key economic driver accounting for 9.2% of GDP — is also preparing to receive foreign arrivals. The sector has suffered the most from the pandemic, losing as much as $7 billion and hitting more than 40,000 businesses and 4.5 million jobs. To alleviate this, the government wants to reopen Phu Quoc Island, a popular destination for Chinese tourists.

In May, Hanoi announced e-visas for people from 80 countries entering at eight international airports from July 1. Foreigners will also be allowed to enter the country via 29 land and sea crossings.

However, the aviation experts said the country is moving cautiously in its efforts to reopen.