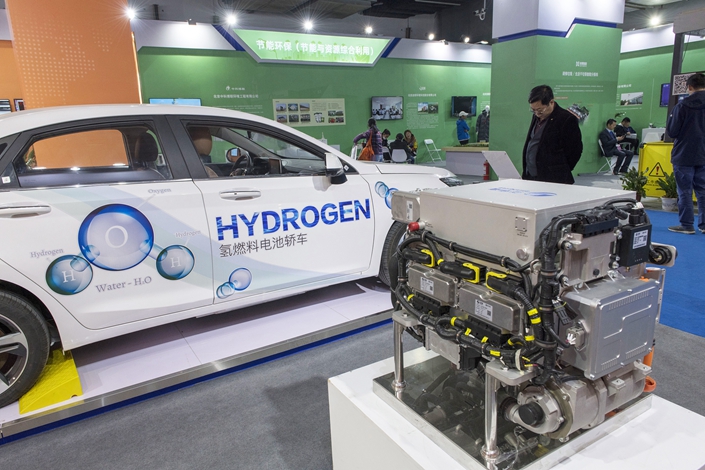 Don’t count out hydrogen-fueled cars just yet in China’s move to cleaner vehicles.

That’s the word from Beijing, where the Ministry of Housing and Urban-Rural Development has just rolled out its latest draft regulations governing the transport and storage of the hydrogen fuel that powers such cars. The latest document has added language that could pave the way for transport and storage of liquefied hydrogen that is cheaper than pressurized gas now most commonly used.

Experts estimate that in the current market, the hydrogen needed to power a fuel cell car in China costs about 70 yuan ($10) per kilogram. But they estimate that needs to come down to less than 40 yuan before hydrogen-powered cars can be truly competitive with traditional gas-powered ones.

That’s where liquefied hydrogen comes in, offering potential major savings that could sharply reduce the price of hydrogen fuel. Researchers at China’s National Development and Reform Commission estimate the cost of transporting such fuel in liquid form is just one-eighth that of transporting it in the pressurized gas form now most widely used. Transport of liquefied hydrogen is already widely used in developed nations like the U.S., Germany and Japan.

The Housing and Urban-Rural Development Ministry isn’t the only one tackling the issue. Last year, a national committee solicited comments on draft technical requirements for the safe transport and storage of liquid hydrogen. A person involved with that effort told Caixin the draft is still being modified due to delays caused by the coronavirus outbreak.

China is working hard to put more clean energy vehicles on its roads in an effort to clean up the nation’s polluted air. Most of that effort has focused on electric and hybrid vehicles, though that sector has moved into the slow lane these days after Beijing sharply reduced government subsidies last year in an effort to make producers more self-sufficient.