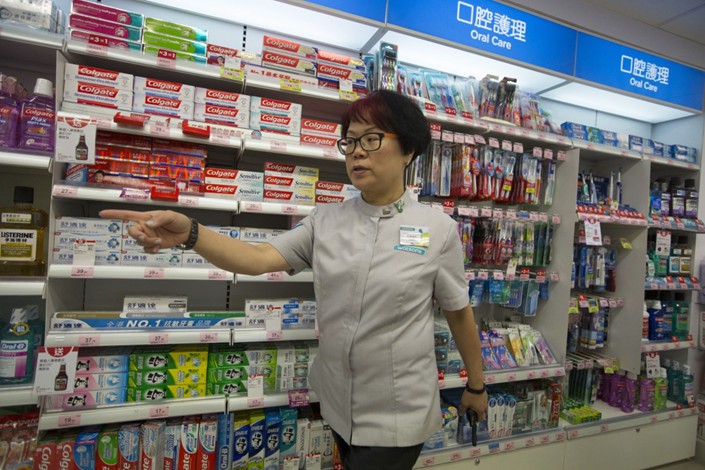 An employee works in a Watsons store in the Tin Hau area of Hong Kong on Oct. 18, 2013. Photo: Bloomberg

(Bloomberg) — Colgate-Palmolive Co. is carrying out a review of “all aspects” of its Darlie toothpaste as the company grapples with the racist past of the brand sold in China.

The product is owned by Colgate-Palmolive and its partner Hawley & Hazel and once used an offensive racial epithet for a black person as its English name.

“For more than 35 years, we have been working together to evolve the brand, including substantial changes to the name, logo and packaging,” Colgate-Palmolive said in an email. “We are currently working with our partner to review and further evolve all aspects of the brand, including the brand name.”

The move comes amid rebranding efforts by other consumer-goods companies after weeks of civil unrest and protests over the killing of George Floyd and systemic racial inequality in the U.S.

On Wednesday, PepsiCo Inc. said it will change the name of Aunt Jemima pancake mix after 131 years on the market due to its roots in a racist stereotype. The image of a black woman will be removed from its packaging at the beginning of the fourth quarter.

Conagra Brands Inc. announced a “complete brand and packaging review” of its Mrs. Butterworth’s syrup, which comes in a bottle shaped like a woman. The owners of Uncle Ben’s rice and Cream of Wheat also said they would review their packaging, which each feature images of black men.

Controversy has followed the toothpaste brand for years, with shareholders, minority groups and religious organizations calling on Colgate to rebrand the product after it bought a stake in 1985. The company agreed in 1989 to rename the toothpaste and redesign the logo, which featured a man in blackface — design elements then-CEO Reuben Mark called “just plain wrong,” according to a New York Times report at the time.

The toothpaste brand, which the Times said was conceived in the 1920s after Hawley & Hazel’s CEO saw Al Jolson perform, changed its English name by a single letter, though the Chinese name stayed the same. The company also changed the logo to a man of more ambiguous race.