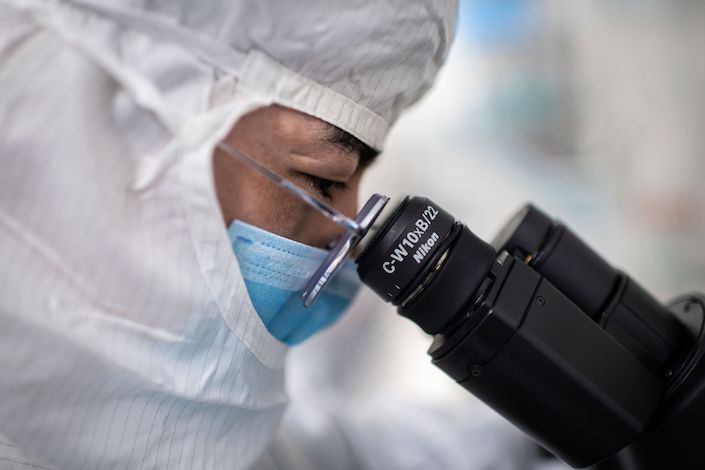 A scientist looks through a microscope. Photo: Bloomberg

(Bloomberg) — A Chinese state-owned vaccine developer secured regulatory approval to test its coronavirus shots in the United Arab Emirates, making it one of the first among dozens of global efforts to get a green light for the final stage of human trials.

CNBG said it will work in partnership with Abu Dhabi-based artificial intelligence and cloud computing company G42 to carry out the trial and local production of the vaccine. It didn’t disclose details such as the timing or the number of people it plans to enroll for testing.

The world’s fast-developing vaccine programs are moving into the final stage of testing before approval as inoculations for the general public. Pharmaceutical companies around the globe are racing to find an effective shot against the novel coronavirus, which has infected more than 9.2 million people and killed more than 476,000.

CNBG is the first Chinese vaccine developer to proceed toward a Phase III trial to test whether the two shots it developed are effective against the pathogen.

Chinese companies have had to look for places with active virus outbreaks to complete the final stage of human testing, which requires thousands of people. The low number of cases in China has made it unfeasible for them to conduct such trials at home. The U.A.E. is still adding hundreds of cases a day, with a total of more than 45,000 infections.

Chinese biotech CanSino Biologics Inc. was approved last month to conduct human testing of the vaccine it co-developed with the Chinese military in Canada, but will need to redo early safety studies before going into the Phase III trial. Beijing-based Sinovac Biotech Ltd. is in a partnership with Instituto Butantan to roll out testing of its shot on 9,000 people in the hot spot of Brazil but has not won approval to proceed.

Vaccine candidates from companies outside of China are also headed for Phase III trials. A shot co-developed by the University of Oxford and AstraZeneca Plc will be tested among 2,000 people in Brazil starting as early as this month. Cambridge, Massachusetts-based Moderna Inc. is set to begin testing its shot next month in a 30,000-person trial in the U.S.

The two shots developed by CNBG have already been tested among 2,000 people in phase I and II trials in China. One of the vaccines has been found to be generally safe, while data from the other is to be revealed June 28. The shots were already administered to more than 1,000 employees, including senior executives of CNBG and its parent company.

Employees of Chinese state-run companies are said to have also been offered voluntary shots of the CNBG vaccines if they are traveling for work overseas or if they live in high-risk areas of Beijing, where there recently was a fresh virus outbreak.