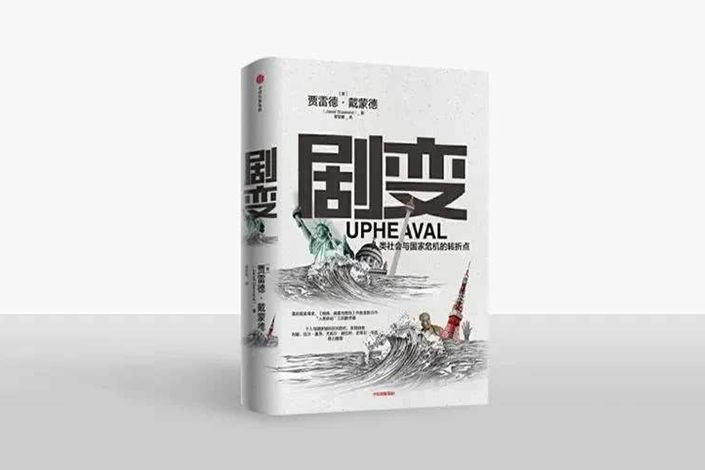 The Chinese translation of Jared Diamond’s book “Upheaval” could not have come at a better time. Almost every nation-state is now enveloped in the compounded crises of a pandemic, economic depression and even, for some, widespread social unrest. These crises are global in nature, causing acute personal and communal pain. During these difficult times, reading Diamond’s “Upheaval” is at once therapeutic and instructive.

The crises of seven countries in Diamond’s book included, among others, Finland’s existential danger in facing up against the powerful Soviet Union; Japan’s response to late 19th century Western military aggression and existential shock; and the unfolding crises in the United States, which may undermine American democracy and its global dominance.

Adapting therapies applicable to individuals navigating life’s turmoil, Diamond lists factors used in addressing crises, including an acknowledgment that one is in crisis, acceptance of national responsibility to act, an honest self-appraisal and adopting selective national change.

The methodology of using personal crisis therapies for thinking about the crises of nation-states is perhaps unprecedented in the scholarship of history and international politics. However, the methodology of drawing parallels between personal self-reflection and self-improvement on the one hand, and community soul-searching and collective well-being on the other, has been a tradition in the East going back thousands of years.

An oft-quoted passage of a Confucian classic lays out the lifetime mission of a literati as “cultivating the moral self, regulating the family, maintaining the state rightly and making the world peaceful.”

According to this Confucian teaching, personal moral character building is intricately bound up with the order of a community. Similarly, the ills of society reflect the moral decay of the individual. One’s life lessons are instructive for society and community-building. Founded on the metaphysics of the interconnectivity of all things, this ancient Chinese teaching goes far beyond Diamond’s drawing of parallels between personal and national crises. Nonetheless, his methodology struck a chord in the minds of Chinese readers.

Readers typically read their issues of the day into Diamond’s case studies. To me, the most fascinating case is Japan’s transition from an ancient society to a formidable military power in modern history.

A few questions have been on my mind. First, how did Japan manage its transition to modernity without suffering the fate of European domination and national division, as China did? Secondly, how was Japan able to produce the “mosaic” of its modern identity of largely Western political and legal institutions while retaining its age-old social norms? Thirdly, how did Japan skid into militarism in the late 19th to early 20th century? Diamond’s “Upheaval” helps to answer the first two questions but falls short in providing insight to the third.

Commodore Perry’s uninvited visit in 1853 triggered a tumultuous period of Japanese history, which saw the downfall of the Shogunate and re-empowerment of the Imperial Court as the central force of political polity. Based on an honest self-appraisal, Meiji Japan embarked on a crash program of modernization and reform in 1868 by introducing a Western-style constitution, legal codes, a modern taxation system, and a military system. However, other features of traditional Japan were retained, including emperor worship, and Shintoism.

In line with the international power ethos of the time, the ultimate way to gain respect from European powers was to do what they did — pursue territorial conquests and apply military aggression. That was exactly what Japan did, with the formal annexation in 1869 of the northern island of Hokkaido, a final annexation of Taiwan in 1895, a victory in the 1894-1895 war against the Qing dynasty of China, and most significantly, the defeat of Russia in the1904-1905 war.

In concluding the Japan chapter, Diamond notes that “Japan’s military expansion into the Meiji Era was consistently successful, because it was guided at every step by honest, realistic, cautious, informed self-appraisal of the relative strength of Japan and its targets, and by a correct assessment of what was realistically possible for Japan.” His seemingly affirmative comments on Japan’s remake of its identity and buildup of its military capabilities in modern history dismayed me, to say the least. This is where I found Diamond’s analysis of Japan’s case troubling. How Japan’s self-strengthening and reform slid into extreme military aggression was unsatisfactorily explained in Diamond’s book.

The role of culture and values in Japan’s rise and transformation was largely missing in Diamond’s analysis. In my view, during the pursuit of becoming a European-like power, Japan’s drastic turn from an isolated country to a militaristic power was guided by misappropriated values and practices associated with its long tradition of Samurai spirit, later known as Bushido, which emphasized loyalty, self-sacrifice, discipline and honor. It adopted wholesale the then-Western values of aggression and domination and infused them with a modified notion of Bushido.

Therefore, I regard Japan’s military rise in the late 19th century as being a result of the collapse of native values and capitulation to the then dominating strong-power ethos. The compromised and distorted version of Japan’s values were couched in a narrative that appealed to the Japanese population at the time. That turn of history was regrettable and worthy of deep reflection.

At this juncture, it is worth noting that in Diamond’s award-winning work of Guns, Germs, and Steel, the dimension of values and culture was similarly missing. In that book, Diamond convincingly argued that the difference in the emergence of food production in societies was the major cause of their different fates. Other causes included germs, technology, political organization, and writing.

However, his analysis broke down when he started explaining why Europeans colonized the Americas and parts of Asia, but not the other way around. Diamond argued that the reasons for the Europeans to pursue cross-continent colonization were their maritime technology and centralized political organizations, making little reference to the values of monotheism and mercantilism prevalent in the Age of Discoveries. So, it seems only natural that technologically powerful and politically sophisticated nations would venture outside their natural boundaries to “expand their realms and conquer other peoples.”

But this line of thinking does not apply to Chinese history. Technologically more advanced than Western Eurasia until the 15th century, Ming China had then by far the most sophisticated shipping and navigational technologies in the world and it did send large fleets to as far away as Africa in early years of 1400, but it did not embark on territorial conquests.

When comparing Britain and Japan, both island countries lying close to large continents, Diamond notes that Britain had close cultural, trading, political and military interactions with the continent, whereas Japan was a largely isolated society until the 19th century. Questions arise: why didn’t China colonize Japan? Why did Japan of the Meiji Era reverse its thousand-year strong course of isolation? Diamond’s theories of food production and resulting guns, germs and steel do not provide answers. I think only when we investigate the cultures and values of these countries can we begin to find answers to such questions.

The omission in Diamond’s books of cultural and value-based analyses is so glaring that it seriously harms the intellectual appeal of his books. Nonetheless, Diamond is an inspirational thinker of our time. The breadth of his knowledge and his epic attempt to address big questions are truly astonishing.