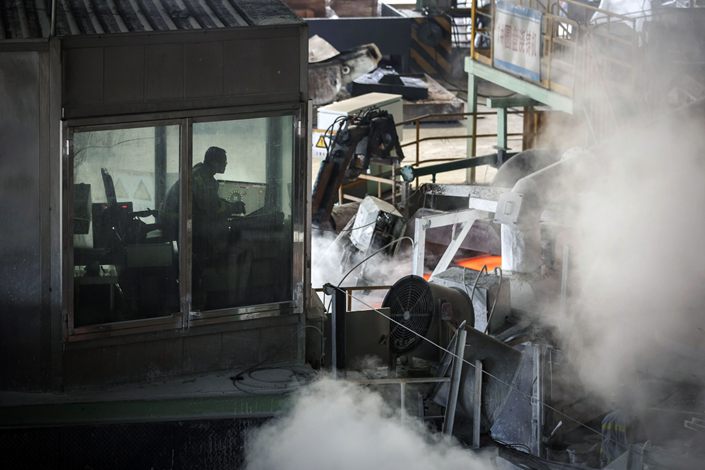 A worker sits inside a control booth at a copper smelter in Tongling, East China’s Anhui province, in January 2019. Photo: Bloomberg

(Bloomberg) — A gauge of China’s manufacturing activity climbed in June, signaling the country’s gradual recovery from the coronavirus slump remains on track.

The official manufacturing purchasing managers’ index rose to 50.9 from 50.6 a month earlier, according to data released Tuesday by the National Bureau of Statistics. The nonmanufacturing gauge rose to 54.4. Readings above 50 indicate improving conditions from the previous month.

The data confirm the trend of a gradual domestic recovery from the historic contraction in the first quarter and back up the government’s relatively modest stance on policy stimulus. But with the coronavirus hitting global demand and continued outbreaks of the virus not ruled out, the rebound may prove hard to sustain.

A subindex of new export orders climbed to 42.6, while manufacturing employment fell to 49.1 and the nonfactory job index rose to 48.7.

The data show that manufacturing is still leading the recovery in China, said Zhou Hao, senior emerging markets economist at Commerzbank AG in Singapore. “China’s GDP growth is very likely to turn positive in the second quarter. However, the job data remain a concern as both job indices are below 50, suggesting that the demand recovery still lags behind.”

While parts of the economy have recovered from the virus shutdowns, there’s an apparent divergence between demand and supply — factories and companies have returned and output is growing again, but exports and domestic retail sales are shrinking.

Almost 55% of firms said demand was inadequate, the fourth straight month more than half of firms have said that, Wen Tao, an analyst at the China Logistics Information Center, which helps compile the data, wrote in a report on its website.

“The new orders index is lower than the output index by 2.5 percentage points, meaning the gap between production and demand is widening, leading to rising oversupply pressures.”

Tourism revenue fell almost 70% during a three-day holiday last week compared to the same period in 2019, according to China International Capital Corp. Severe flooding in southern China may also have slowed the pace of production in some areas, and a recent flare-up of the coronavirus has also hit confidence.

A separate PMI indicator that gauges China’s high-tech industries slowed significantly this month. A Bloomberg Economics gauge of early indicators on the economy picked up in June, with a better performance for smaller companies tempered by the still-grim global outlook.

“China’s recovery is still on track, but the momentum could lose some steam in coming months,” said Lu Ting, chief China economist at Nomura International Ltd in Hong Kong. “Despite the strong recovery between March and mid-June, we believe a full economic recovery remains distant. In our view, it is too early for Beijing to reverse its easing stance.”