Gilead Chooses Middle Ground in Pricing of Its Coronavirus Drug 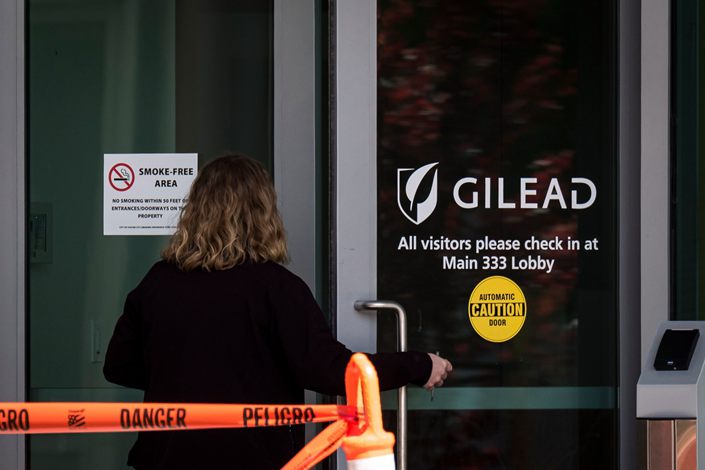 (Bloomberg) — Gilead Sciences Inc. said that it will charge U.S. hospitals roughly $3,120 for most patients who need remdesivir, picking a middle ground in a high-profile decision on the cost of one of the first drugs for Covid-19.

Patients suffering from the illness caused by the novel coronavirus are usually given six vials of remdesivir over five days. The price, which comes to $520 a vial, would apply to commercially insured patients in the U.S., according to a letter from Gilead CEO Daniel O’Day posted on the company’s website Monday.

It plans to charge $390 a vial, or $2,340 for a five-day regimen, for direct government purchases by the U.S. or other developed countries.

Gilead’s pricing decision is consequential because it sets a precedent for how much future Covid-19 treatments might cost. While it’s higher than some patient groups had pushed for, it was close to a level that some drug-pricing watchdogs have said would be acceptable based on remdesivir’s expected benefit.

The medicine could yield substantial profits for Gilead if large quantities are needed for many months, as seems likely.

Gilead said in a statement that it would offer the lower price to developed countries in order to create a one-price model that would avoid the need for negotiations that could slow down access.

“We wanted to make sure that nothing gets in the way of remdesivir getting to patients,” O’Day said in an interview. The price “will make sure all patients around the world have access to this medicine.”

Brazil, which is in the midst of the one of the world’s worst outbreaks, may be one of the countries set to get the lower price.

Remdesivir is one of the first widely used drugs for Covid-19. It received an emergency use authorization from U.S. regulators in May, after a big trial found it sped recovery by about four days in hospitalized patients. Hundreds of treatments and vaccines are in development around the globe as researchers race to find ways to halt a global pandemic that’s infected over 10 million people and killed more than 500,000.

Gilead had promised to donate the drug through June, but what the company would charge after that supply runs out has been furiously debated.

It wasn’t immediately clear how many U.S. patients would qualify for the lower price beyond those treated at facilities operated by the Department of Veterans Affairs. Meanwhile, for patients in the Medicare program for the elderly, hospitals will purchase the medicine at commercial rates, Gilead said.

The company suggested that it could have charged more based on the value the medicine provides, the typical approach drugmakers use in setting pricing for new and innovative therapies. It argued remdesivir could save $12,000 per patient by getting people out of the hospital faster. But it went with a lower price in order to make sure that all developed countries could afford it.

The price “is within the reasonable range, and should contribute significantly” to Gilead’s revenue and growth through the mid-2020s,” Geoffrey Porges, an analyst at SVB Leerink LLC, said in a note to clients. Porges has advocated for a price that allows Gilead to make a reasonable profit as an incentive for private companies to research medicines for this and future epidemics.

Shares of Gilead gained as much as 2.7% in trading Monday in New York.

Gilead also said Monday it reached an agreement with the Department of Health and Human Services to manage allocation of remdesivir in the U.S. through September. In a statement, HHS said the agreement would cover more than 500,000 treatment courses of remdesivir for American hospitals.

Some advocates, including consumer-rights group Public Citizen, have said the drug should just cost $1 a day based on calculations that it could be manufactured at scale by generic drugmakers for this amount. Public Citizen issued a statement calling Gilead’s price “offensive.”

In the interview, O’Day said $1 per day was “not a realistic price point.”

O’Day said pricing of the drug was a balancing act. On the one hand, a pandemic is raging and there is no cure. On the other hand, the company is a for-profit entity that has made enormous investments into manufacturing large quantities of the medicine quickly, as well as developing new, easier-to-administer versions.

The Institute for Clinical and Economic Review, a U.S. group that analyzes the cost-effectiveness of drugs, said Gilead’s price “is largely in line” with its estimate of a reasonable cost of $2,800 per treatment. The group earlier said remdesivir would be cost effective at $4,500, but recently lowered its figure after the inexpensive steroid dexamethasone was found to reduce deaths in advanced Covid-19 patients.

ICER President Steve Pearson said in a statement that the group’s analysis is based on the assumption remdesivir saves lives. That hasn’t been proven yet, though one big trial indicated it might lower the death rate.

Citing the limited data, some researchers said remdesivir is overpriced.

“I do not think remdesivir data are worth this price or the hype it has gotten,” Inmaculada Hernandez, an assistant professor of pharmacy and therapeutics at the University of Pittsburgh, said in an email.

Some Covid-19 patients need 10 days of treatment with remdesivir, or 11 vials, which would bring the total cost up to $4,290 for government purchases, or $5,720 for commercial purchases. Gilead’s O’Day said the vast majority of patients, more than 90%, are being treated with the 5-day course.