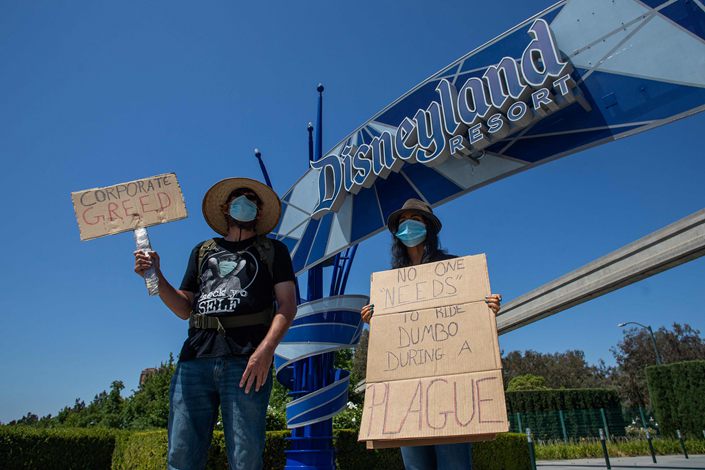 People hold signs in front of Disneyland Resort in Anaheim, California, on June 27 calling for higher safety standards before its reopening on July 17.

Michael J. Boskin is professor of economics at Stanford University and senior fellow at the Hoover Institution. He was chairman of George H.W. Bush’s Council of Economic Advisers from 1989 to 1993.

Like most of the world, the United States is attempting to overcome both the Covid-19 pandemic and a deep recession caused by the resulting government-ordered shutdown. At annual rates, the U.S. economy shrank by 5% in the first quarter of 2020, and in the second quarter just ending, it could contract by 40% — the steepest decline since the Great Depression.

Moreover, tens of millions of workers have lost their jobs, causing the unemployment rate to soar to a post-Great Depression high of 14.7% in April. And although 70% of those laid off say they expect to be recalled to their jobs, not all will be, because many firms will fold, relocate, or reorganize.

True, the initial reopening of the economy has led to a sharp rebound that is projected to continue in the third quarter. Employment rose by 2.5 million in May, while high-frequency data from credit cards and mobility tracking for May and June show sizable bounce backs from April lows, with activity in a few sectors approaching or even exceeding year-earlier levels.

But the rebound varies by sector and region. Although Big Tech, home-improvement suppliers, and retail sales of alcoholic beverages have flourished, travel and leisure have collapsed and will take much longer to recover. And restaurants with drive-through service have fared much better than those able to serve only indoors.

Most forecasters therefore predict that the early “V-shaped” recovery will slow over the next few quarters, and instead come to resemble the Nike swoosh. But this plausible baseline forecast is subject to greater than normal uncertainty.

For starters, the shutdown of non-essential businesses in response to the pandemic led to a demand-side shock as well. So far, trillions of dollars in business grants and loans, cash payments to households, and unemployment insurance with federal bonus payments (enabling two-thirds of eligible workers to receive benefits that exceed their lost earnings) have provided a cushion to help the economy recover. The U.S. Federal Reserve has pledged to keep its target interest rate until the economy returns to full employment, and it continues to expand the scope of its asset purchases. And a fourth fiscal package expected next month should focus on reopening the economy, including by limiting firms’ legal liability and redirecting bonus payments to encourage employees to return to work.

How quickly the U.S. recovers from its public-health and economic crises will also depend on how well other countries handle them, and vice versa. The World Bank expects 93% of countries to slide into recession in 2020, the highest share ever.

Although the recent spikes in new Covid-19 cases and hospitalizations in the U.S. appear manageable for now, given adequate provision of hospital beds and equipment, a significant worsening could trigger new shutdowns or stall further reopening. That would slow the recovery, resulting in economic despair and related health and social problems for many Americans.

Moreover, America’s twin crises have revealed longer-term problems, starting with the country’s inadequate stockpiles of medical supplies. California, for example, never maintained the supplies then-Governor Arnold Schwarzenegger built up to combat the 2002-03 SARS epidemic, and had to repair hundreds of defective ventilators. And state governments’ antiquated computer systems for processing unemployment claims and dispensing benefits buckled under the pandemic-induced strain.

In addition, the Covid-19 shock has shown that too many individuals and firms lack the financial margin to weather even a few months of lost income or revenue. It has also both highlighted and worsened racial disparities in health, income, and vulnerability to economic and health shocks.

These crises elicited massive, rapid, and unprecedented interventionist responses. But government responses enacted under exigent circumstances must control costs better and restore private incentives in the longer term, because history shows that, once launched, public programs and interventions seldom end.

The economic and health recoveries also heavily depend on the actions of businesses, citizens, and schools, including whether they adhere to recommended precautions such as social distancing, frequent hand washing, and wearing face masks. It remains to be seen whether firms can survive with restrictions on employees and customers, and whether the accelerated digital transformation will be a net plus. The other danger, of course, is a large second wave of the virus that overwhelms hospitals and scares away employees, students, and customers.

One bright spot has been the rapid pace of adaptive innovation. Most U.S. schools quickly continued teaching online following the shutdown, while telemedicine has boomed, helped by the relaxation of government pay restrictions and rules prohibiting inter-state medical consultations. And medical researchers quickly refocused on Covid-19 testing, therapeutics, and vaccines: human trials have started for several promising vaccines, and new tests may be deployed before winter. For the first time, vaccine production capacity will be ramped up simultaneously with testing, so that any safe and effective vaccine that emerges will become available far more quickly.

But the longer-term problems revealed by the pandemic and the recession will not disappear when these crises end. True, before Covid-19 struck, things finally had started looking up for lower-income workers. Minority unemployment was at an all-time low, and wages were rising most rapidly at the bottom of the pay scale. But while strong economic growth will be needed to ensure that these trends resume, there are pockets of people who have been left behind.

To address this requires reinvigorating policies to broaden school choice, bring private jobs and capital to depressed areas, and ensure better job training (including more apprenticeships and job matching), as well as taking a new approach to overlapping means-tested anti-poverty programs. U.S. welfare recipients face extremely high implicit marginal tax rates in terms of the benefits they lose if they work, with many standing to earn less if they worked than if they remained on the several overlapping programs.

It is extremely difficult to predict the speed and strength of the U.S. economic recovery with any certainty. What is clear, however, is that we must boost incentives to work in normal times when jobs are plentiful, while strengthening the safety net for when they are not and for those who are unable to work.