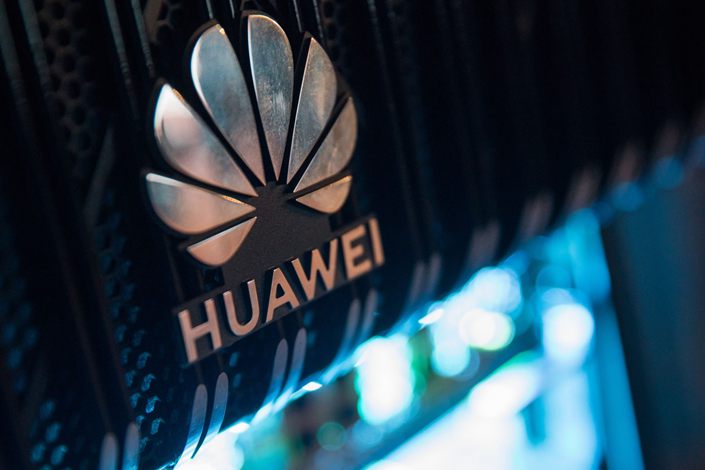 A corporate logo sits on a Huawei Technologies Co. NetEngine 8000 intelligent metro router on display during a 5G event in London, U.K., on Feb. 20. Photo: Bloomberg

The action means money from federal subsidies used by many small rural carriers may no longer be used to buy or maintain equipment produced by the companies, the FCC said in a news release.

“We cannot treat Huawei and ZTE as anything less than a threat to our collective security,” FCC Commissioner Brendan Carr said in a statement. “Nothing short of prohibiting subsidized Huawei and ZTE gear from our networks could address this serious national security threat.”

The FCC has increasingly scrutinized Chinese companies as tensions grow between Beijing and Washington over trade, the coronavirus and security issues. The agency is considering banning three Chinese telephone companies, and last year barred China Mobile Ltd. from entering the U.S. market.

The U.S. contends that Huawei’s equipment could be used by China for spying. The company has repeatedly denied that it poses any security risk, and insists that it’s independent of the Beijing government.

Tuesday’s action formalizes a proposal the FCC adopted in November. The agency also proposed requiring carriers to remove gear from companies designated a threat — a step that wasn’t finalized in Tuesday’s action.

The designation means service will suffer as small carriers shut down parts of their network because they can’t use subsidy funds for maintenance or replacement parts, said Carri Bennet, general counsel of the Rural Wireless Association that represents carriers with fewer than 100,000 subscribers.

“This is not good,” Bennet said in an interview. “They’re in a bind. They don’t have cash to keep the networks afloat.”

About three dozen or four dozen rural carriers accept the subsidy and use equipment from Huawei or ZTE, the FCC estimated last year. It said the average cost for a firm to replace the equipment may range from $40 million to $45 million.

FCC Commissioner Geoffrey Starks in a statement Tuesday said that “untrustworthy equipment” remains in place and called for the FCC to institute a replacement program. “There is much more to do,” he said.

Pai on June 24 told Congress a full-scale rip-and-replace program could cost as much as $2 billion. The FCC wants to see “that needed funds are appropriated so we can move forward quickly to implement this program,” Pai said.

Rob Manfredo, a U.S.-based spokesman for Huawei, didn’t immediately respond to a request for comment.

Caixin contributed to this report