Australia to Open Borders for One Group: International Students 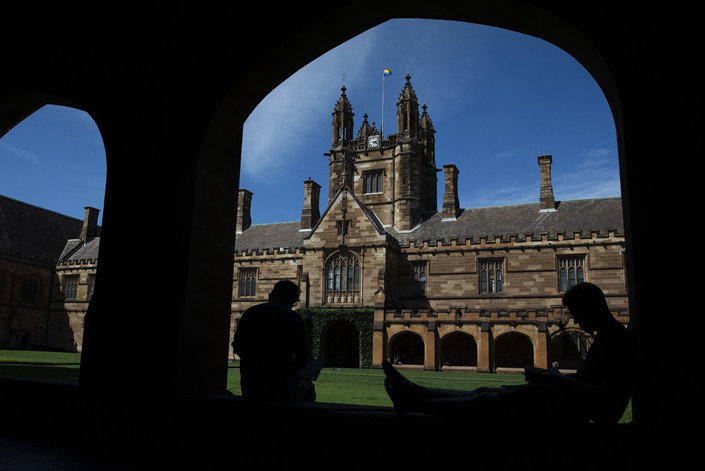 Students sit in the cloister of the quadrangle at the University of Sydney on Feb. 25. Photo: Bloomberg

(Bloomberg) — While Australia’s borders remain firmly closed to overseas visitors, the government plans to make a notable exception as it races to save its fourth-biggest export: Education.

In time for the new semester, authorities are working on a plan to allow 350 international students to be flown into Canberra, the nation’s capital, later this month to resume classes. Under a trial program that could be rolled out nationally, the universities and territory government will foot the bill for their two-week mandatory quarantine in hotels.

It’s a sign of just how reliant Australia’s higher education sector has become on overseas students, who make up roughly a quarter of all enrollments — the second-highest ratio in the world after Luxembourg — and 40% of student revenues due to the higher fees they are charged.

But the extraordinary steps to help the A$38 billion ($26 billion) industry recover from the coronavirus lockdown may not be enough to guarantee its long-term future.

Australia has fallen behind the U.S., U.K. and France in the highly competitive market by opening fewer offshore campuses. And with 37% of its international students at universities coming from China in 2019, it serves as a warning to other nations of the perils of growing too dependent on a single market.

Relations with Beijing are in the deep freeze after Prime Minister Scott Morrison led calls for an inquiry into the source of the Covid-19 outbreak. China has since warned its citizens they face the risk of racist attacks in Australia if they study or holiday there.

“It’s a really risky situation for Australia’s universities because we’re dealing with two very major events” with the virus and increasing diplomatic tensions, said Angela Lehmann, education analyst at the Lygon Group, a Melbourne-based consultancy. “We are on a precipice at the moment.”

It may be several months before the impact of China’s warning shows up in enrollment numbers, which had already been plateauing for the past three years. But a recent survey conducted by the state-run Global Times was ominous. More than 80% of respondents said they would “definitely or somewhat consider” bilateral relations when choosing their study and travel destinations.

The education sector’s most pressing concern is to get as many overseas students as possible into Australia in time for the July semester.

“We don’t have a one year problem — we have a two-, three-, four-year problem,” if students are unable to return to Australia and the delays drag out across their degrees, said Catriona Jackson, chief executive of Universities Australia, the peak body for the sector. The group forecasts lost revenue of as much as A$16 billion by 2023.

The clock is ticking before the semester begins on July 27. From a pool of thousands, the two universities participating in the pilot program must whittle the list of students down to 350 through an online application process. Those chosen will have to make their own way to a departure city, presumably somewhere in Asia, that’s not yet been named for a chartered flight to Australia, before completing the mandatory two-week quarantine.

The program could yet come adrift if final approval isn’t granted by the federal government. Morrison insists that states and territories that have closed their borders must first reopen to ensure domestic students from other parts of the country can return to class before international students are allowed in.

Higher education is a fiercely competitive global industry and the battle to lure overseas students begins long before they graduate high school.

The U.S., Canada and the U.K. have been proactive in rolling out their curricula in international schools in countries such as China, effectively paving a pathway to their universities, according to Phil Honeywood, chief executive of the International Education Association of Australia, an organization that aims to boost Australia’s standing in the global market.

Over the past six years, he said, the number of such schools in China has ballooned to 500 from 150 and of those, only 39 teach an Australian final year matriculation certificate.

American and British universities are also the most active in opening overseas university campuses. Along with France and Russia, the nations accounted for nearly two thirds of the world’s 294 transnational campuses, while Australia had just 19, according to data supplied by the Cross-Border Education Research Team. With many international borders closed, having an in-country presence is even more important.

“It’s been easier for Australian universities to rely on recruiting students to come and study in Australia,” said Honeywood. “Clearly they need to be looking at offshore delivery.”

While Australia has six universities in the top 100 of the Times Higher Education World University Rankings, the sector isn’t considered as prestigious as Ivy League colleges in the U.S., or leading institutions in the U.K.

The importance of the sector to the Australian economy is clear. As an export, education ranks only behind iron ore, coal and natural gas.

A 2018 London Economics report showed that every A$1 spent on research at Australia’s Group of Eight Universities produced almost A$10 back in benefits to the private sector and the wider economy.

The fees paid by overseas students help prop up “a lot of the fundamental research” in Australian universities, said Michael Spence, vice chancellor of the University of Sydney, where nearly a quarter of the entire student cohort come from China. “The current situation has revealed how vulnerable to shock the system is.”

Some universities, including the University of Sydney, have enough cash reserves and assets such as buildings to sell off to survive the current crunch, said Spence. Many institutions have slashed subject offerings while others have axed hundreds of staff.

Still, Australia has a compelling advantage over global competitors, according to Honeywood — its success to date in containing the coronavirus to just over 7,500 cases and 104 deaths.

Provided the pandemic eases, Australia’s academic year beginning in February should also give it an edge over Northern Hemisphere institutions that typically begin in August or September, with students keen to get their studies underway.

If Australia can “provide a more comprehensive narrative about our genuine care for international students’ welfare, then we’ll be better placed against many other” countries, Honeywood said. “If we move quickly.”