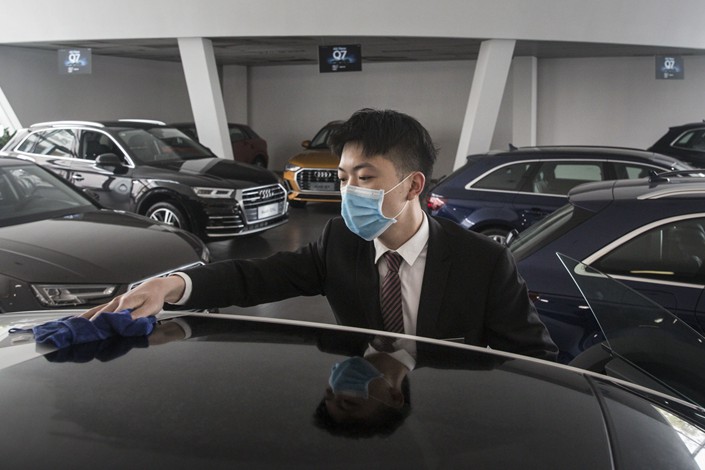 An employee wearing a protective mask wipes a vehicle on display inside an Audi AG dealership in Wuhan, Hubei province, on April 6. Photo: Bloomberg

(Bloomberg) — Tesla Inc.’s new Shanghai plant has churned out popular Model 3 sedans for the past six months, catapulting the company atop the electric-car sales chart and piling the pressure on cash-strapped local rivals. There was another casualty last week.

Byton Ltd. is at least the third sizable electric-vehicle upstart to throw in the towel since Elon Musk started his made-in-China offensive, after Bordrin Motors and Jiangsu Saleen Automotive Technology Co. wound their operations down earlier this year. They fell victim to plummeting demand amid the trade war and coronavirus pandemic, and as the government scaled back the subsidies that turned China into the world’s biggest EV market with hundreds of producers.

A Tesla Model 3 moves off an assembly line during a ceremony at the company's Gigafactory in Shanghai in 2019.

Yet Tesla, in just half a year, grabbed a hefty slice of that shrinking pie — and its portion keeps getting bigger. The market leader’s sales now approach a quarter of the total tally for EVs, the China Passenger Car Association said Wednesday, as wealthier buyers are drawn to Tesla’s brand cachet. That’s making life difficult for the slew of local contenders and risks exposing the multibillion-dollar Chinese EV push as a bubble.

“It is more and more difficult for EV startups to raise funds,” said Cui Dongshu, secretary general of PCA. “New-energy vehicles have not yet been popularized on a large scale — so it is like the situation where there is not enough food in the temple, and some of the monks are forced out.”

Tesla representatives in China didn’t immediately respond to a request for comment.

The Chinese government infused massive amounts of money into the alternative-energy vehicle sector over the past two decades, persuading foreign carmakers such as Tesla and Volkswagen AG to start manufacturing EVs in the country. A market that was initially dominated by local companies became more competitive, turning investors increasingly cautious on the fledging local startups. At one point last year, there were almost 500 EV manufacturers registered in China.

William Li, founder of Chinese electric-car maker Nio Inc., foresaw the local contenders’ predicament two years ago. In an internal meeting in May 2018, Li predicted that Tesla managing to set up production in China within three years would trigger the demise of many local rivals, according to people familiar with the matter. Nio declined to comment.

Many startups’ troubles worsened during 2019 while Tesla constructed its facility. Out of about 100 Chinese startups developing electric cars, a diminishing group of just 11 succeeded in raising funds last year, according to Bill Russo, founder and CEO of Automobility Ltd. in Shanghai.

Byton and Bordrin succumbing to market realities so soon after their latest fundraising rounds shows the cut-throat nature of the capital-intensive business. Sales of NEVs fell 35% to 85,600 units in June, PCA said.

Future Capital Discovery Ventures has invested in one EV firm, Lixiang Auto, said founding partner Huang Mingming, who was impressed by its SUV reaching sales of 10,000 units in a relatively quick six months. Yet many investors are pessimistic about startups’ prospects and are turned off by heavy upfront capital requirements and growth projections that trail internet and technology companies, he said.

Byton, one of the highest-profile startups that never sold a car, suspended domestic operations this month and furloughed staff. The company invited employees to resign and said it is making efforts to obtain funding to pay salaries owed.

The company, which plotted a U.S. entry for years, struggled to meet announced deadlines to start producing and delivering its first model even before Tesla made its China push and the virus broke out. Its website still accepts reservations for cars.

Bordrin, based in Nanjing, is facing “serious operational difficulties” after failing to attract investments, founder Huang Yiming said in an open letter on June 13. Huang, who is trying to revamp the company’s strategy, declined to be interviewed, saying he is occupied with the business. He isn’t related to Huang of Future Capital.

Jiangsu Saleen, which held a high-profile car launch in July 2019 attended by actor Jason Statham and Chinese-Canadian rapper Kris Wu at the stadium that hosted the 2008 Beijing Olympics, also is halting operations. The company is under investigation for an alleged certificate fabrication and embezzlement of funds, according to a statement posted on the website of a development zone where the company’s factory is based. Jiangsu Saleen has denied the allegations in local media.

Faraday Future, the electric-vehicle upstart that was on the brink of insolvency in 2018, last year hired the former head of Byton to lead efforts to finally bring its debut car to market. The new leader, Carsten Breitfeld, took over from founder Jia Yueting, who a few years ago left China for the U.S. amid a cash crunch at his domestic businesses. The FF 91 vehicle Faraday is developing is set to boast more than 1,000 horsepower and cost upward of $150,000.

Faraday hasn’t got a target date to start production, Breitfeld said in an interview. It is seeking about $850 million in additional funding, though that amount would far exceed what’s needed to start production and ramp it up, he said. Faraday has been approached by willing investors and expects to make an announcement on securing funds within the next four weeks, he said. Breitfeld said small batch production could start nine months after funding is secured.

“We are at a point now where, for the first time, things are turning around,” he said.

China Evergrande Group, the indebted property developer that’s expanding to EVs, in March reiterated a pledge to become a powerful automobile player even as losses at the business swelled and its first product was delayed.

Miao Wei, the minister for industry and information technology, said five years ago that the government wanted to add a few “catfish” into the EV market, referring to newcomers and foreign rivals that would help spur innovation and bring in advanced technology. The end result would be a more robust and healthier market for those that survive.

The startups already selling — companies such as Nio, WM Motor and Xpeng — are in a relatively better position than those that aren’t as far along with product development, Cui said. Indeed, Nio, which secured $1 billion in additional funds from a regional government this year, sold a record 3,740 vehicles in June.

In contrast, startups that have yet to offer a product are at the biggest risk of suffering, said PCA’s Cui. They still require significant funding to get their business off the ground, and the challenges in obtaining that could speed up mergers and asset sales.

“There are too many EV companies chasing too few customers with constraints on capital,” Russo said. “Consolidation is inevitable.”